The Ridges Sanctuary will host a full day of activities on Aug. 3 under the big tent on the future site of its new visitor center, beginning with its Annual Meeting at 3 pm. 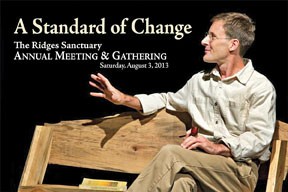 As part of the afternoon, guests will have the opportunity to learn more about the building plans, walk the soon-to-become handicapped accessible Hidden Brook Boardwalk and get an update on the organization’s capital campaign. The $3.5 million campaign was launched at the end of May and has already raised more than $2.4 million.

Evening activities begin at 5 pm with a beverage service followed by a picnic meal by Door County caterer Serves You Right.

“As excited as we are about the new building, The Ridges has always been about the dedication and commitment of people,” noted executive director Steve Leonard. “During the meal, we’ll honor several of those individuals as we announce our 2013 Volunteer Recognition Awards.”

At 7 pm, storyteller, writer and actor Jim Pfitzer takes the stage to perform his one-man touring play, Aldo Leopold: A Standard of Change.  Recreating the farm and chicken-coop-turned-shack that inspired Leopold’s seminal work A Sand County Almanac, Pfitzer portrays Leopold during the development of his most important writings.

“I believe earnestly in the messages of Aldo Leopold and A Standard of Change, and now that I see the power of those messages, I want to take the show everywhere,” said Pfitzer in a recent interview. “It is my goal to perform A Standard of Change in all 50 states. I figure that at 45 years of age, I can play the role for at least twenty more years without outgrowing the part, and I aim to.”