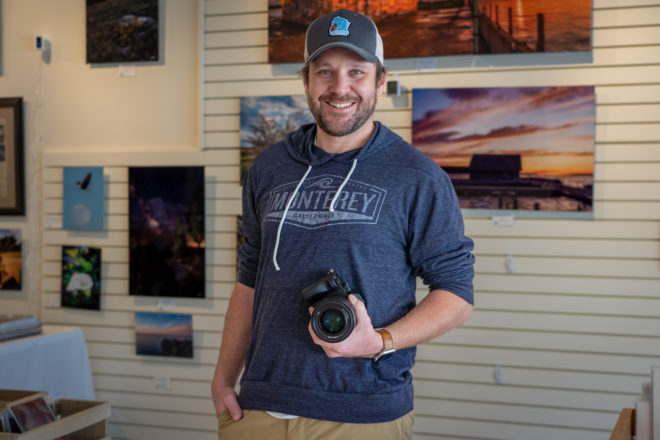 Luke Collins in his Baileys Harbor studio at 8024 Hwy 57. Photo by Rachel Lukas.

A few years ago, my wife suggested I do a photography book spoofing Door County clichés. I wasn’t particularly interested, and a friend provided a reason to dodge the project: How would anyone know it was a spoof?

Door County photographer Luke Collins’ new book, although not a parody of the peninsula, does feature some of the better-known locales and popular photo ops around the county. And he has done it with such fervor and so many examples that he makes even the most jaded consumer of Door County imagery see the county afresh.

Icons of Door County opens – perhaps predictably – with the Winding Road in Gills Rock. But then his enthusiasm and skill really kick in. The book’s opening shot is a composite of his photographs taken from the very same spot on that road over four seasons.

“People think the four-season montage is really cool,” Collins said. “I took the winter picture in February and was there the following fall, and the photos matched. So I went back in spring and summer to get those versions.”

To capture this series, Collins used the same camera and lens on a tripod. A little chip in the paint on the center line ensured that he was in precisely the same location each time.

Continuing through the book, each photograph showcases a new perspective of the familiar: tail lights winding down the road in the dark “Northport Night” and after a light snowfall; Ephraim’s Anderson Dock as the sun nearly drops behind the bluff across the way, and another photograph of that same location after sunset, when the sky glows and the lights have come on inside; and “Anderson Silhouette,” a wide-angle shot featuring lines of clouds against a reddish night sky; an empty, open road in the early morning.

“If there is one key to getting better pictures, it is to get out when the light is good – when you get softer light and you see the sky turn different colors,” Collins said. “It’s not by accident that painters and photographers go out early in the morning or around sunset.”

But one has to wonder, does he get bored? Door County is a small place, after all, with a finite number of scenic spots.

“For me, that is part of the challenge that keeps things interesting and fun,” Collins said. “Every time I go someplace I have been many times, I try to find a new way of photographing it to push my own creativity.”

A drone helps. Exploring the downtown waterfront in Sturgeon Bay with a drone, for instance, has allowed him to take in the bridge from new angles that are not possible with a tripod alone, including a dramatic overhead shot of the SS Badger leaving the harbor for its trip back to Ludington, Michigan.

Collins is no stranger to the county and the photo opportunities it presents because he grew up in Sturgeon Bay. After attending the University of Minnesota, he lived out of state for several years before returning to Door County. He opened his gallery in Baileys Harbor last year after selling prints of his work at the Baileys Harbor farmers market, as well as at various art markets and local festivals.

When Collins travels, he loves to photograph mountains – the Rockies, Breckenridge, the Sierra Nevadas – and the national parks are other favorite locales. His online gallery features some of that work, which is also available for sale.

But Door County will always bring Collins – and his camera – home again, as illustrated in his latest photographic tribute to the parks, buildings and viewpoints that make so many people fall in love with Door County. Sometimes, all over again.

Icons of Door County retails for $29.99 and is available at Collins’ gallery, 8024 Hwy 57 in Baileys Harbor; online at lukecollinsphotography.com; and at Novel Bay Booksellers, 44 N. 3rd Ave. in Sturgeon Bay.