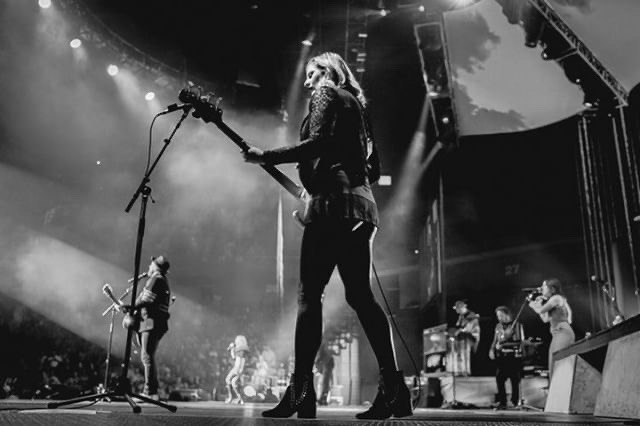 Vanessa McGowan on what happens when music is ripped away

During a normal year, Vanessa McGowan spends her time touring the country as a bass player with Grammy-winning and Grammy-nominated bands that command audiences of thousands. It’s a career that puts her on the road 10 months of the year. She’s accustomed to sleeping on a tour bus as it moves through the night to the next gig in the next city. She knows what it’s like to start mornings in makeshift shower facilities that the night’s venue has set up with partitions. They all look the same, she said, down to the slimy shower shoes.

“It’s not glamorous at all,” she said. “The glamorous part is the 70 minutes you’re standing on the stage. The rest is a grind.”

But even the grind came to a halt. COVID-19 has forced musicians everywhere to confront or rediscover their reasons for choosing careers that require what’s now forbidden: close-together audiences gathered for a night of entertainment.

“I think I realize that music for me is about the connection with other musicians more than anything,” she said. “Playing alone doesn’t bring me the same joy. I love playing music with other people. I really miss it. I’m really excited for the day it can happen again.”

McGowan has a seriously melodic accent that a person would be wrong to peg as Australian or English. Nashville has been her home for the past six years, but she’s from New Zealand. Which makes it all the stranger that McGowan would show up one day in the office of Peninsula Publishing & Distribution as a part-time employee in the advertising department by way of a country so remote that its closest neighbor is the ice-capped continent of Antarctica.

It turned out to be not so strange, but one of the oldest stories in the world: She met the guy, Baileys Harbor resident Jake Danen, with whom she’s had a long-distance relationship ever since a brief side gig at Door County Brewing Co. Taproom & Music Hall in Baileys Harbor four years ago. She played in Door County the one night only – never before or since. The closest was the 10,000-seat Resch Center in Ashwaubenon with the American country music duo Sugarland. And hers wasn’t the love-at-first-sight experience with the peninsula that so many others write home about.

“I thought this was called ‘Deer’ County the whole time I was here,” she recalled, laughing. “Honestly, if you had said I’d end up living here, I would be, ‘Get out. No way.’”

Back in March, when exactly no one thought social distancing would be the new normal for the remainder of the year and beyond, the 38-year-old McGowan was preparing to tour with rising American country music star Brandy Clark. McGowan was the bass player and the tour’s musical director, which meant, among other things, that she was responsible for hiring all of the band members.

They had some 40 gigs booked in cities around the country from March through May. Clark, a six-time Grammy nominee, including for Best New Artist at the 2015 Grammy Awards, did promotions in New York City on all the major networks prior to the tour.

“I came up here for a week [from New York City] to see Jake before that [tour], and that’s when it shut down,” she said.

They waited a few weeks, as hopeful as everyone was back then that this country would contain the virus. The tour was postponed to July, then finally canceled. McGowan returned to Nashville long enough to pack up her car and move to Door County, where she’d wait out the storm with her partner.

“The main thing that sucks is not the [lost] gigs or money,” she said. “You can always find ways to make money. I miss the musical connection, being on the stage and with the crowd. No matter what you do, you can’t re-create it.”

Though McGowan evolved into a performance musician, she started out as a child making music for the sheer joy of it. That was her as a baby strapped into a high chair at her mother’s piano, banging away at the keys. In high school, at 14, she found her instrument in the bass. She earned her college degree in performance bass and then a scholarship to obtain a master’s degree in the United States in jazz bass.

From there, she headed to London for four years before repatriating to the United States and Nashville. In between, her band, Tattletale Saints – a New Zealand duo with Cy Winstanley – won the New Zealand Music Award for Folk Album of the Year in 2014. The album was described as a “masterful blend of American fused with jazz, soul and pop.” She’d make Nashville her home that year, and Americana and country her musical genres of choice.

“That’s where the money is,” she said. “It’s partly that and partly fun to stand on the stage with the lights and smoke and pretend to be a rock star. Definitely being in Nashville, there’s a lot of country and Americana, and the best artists in the world in those genres are there, so I can do some really cool things.”

She said she felt welcomed in Music City, USA – a city with a baseline of “excellent” for a musician to even have a shot. It’s also not a place that suffers fools.

“If you’re genuinely talented and work really hard, it works,” she said. “If people roll into town in their cowboy boots and want to be a star, they close the door.”

It worked for McGowan. Through a mixture of studio work, her own band and the months-long tours with the duo Sugarland, her career took off. She was making a living 100 percent through her music and looking forward to the upcoming tour with Brandy Clark. It’s currently scheduled to start in March 2021.

“I hope the tour happens next year because the album she made is such a good album [that] it would be sad if it doesn’t get its chance,” McGowan said.

Eight months into the pandemic, McGowan is working part time in a new industry. She’s bought winter boots, some warm clothes. When she took a music-industry wellness survey recently, she said confidently that, yes, she’s satisfied with her life on a daily basis. At the same time, she also answered “yes” to the question about whether she experiences anxiety and depression.

She laughed at the dichotomy of her answers in the level-headed way that she has about her. Having been tossed upon a foreign shore by the pandemic’s waves – albeit fortunate enough to be waiting out the storm with someone she loves – clouds of overriding questions loom larger the longer this drags out.

“Did my musical profession end?” she asked. “Do I work for newspapers now? Do I live in a different state now?”

Meanwhile, her online side gig has moved to center stage. Her company, Promusicguide.com, helps musicians turn hobbies into professional careers.

“This period of time feels more about sharing music and teaching rather than performing,” she said. “It’s a process I’ve done, and I feel like I’m entering a part of my life to give back to that.” She paused. “But I still want to play and tour and then come back to the woods in Baileys Harbor with Jake and play with the cats.”

Instrument: Bass and vocalist. She plays a 200-year-old German upright bass and a Fender folding bass that collapses for travel.

“You can’t get an upright bass on a plane anymore,” McGowan said. She plays stand-up and electric bass with equal facility.

Endorsed by: D’Addario, Fender, Aguilar Amps and Fishman. McGowan said all the basses she plays (except the upright) are Fenders. She’s been playing them since she was 14 years old.

Side gigs: Runs the music-education platform Promusicguide.com as a complete guide to building a career as a professional musician. And, with musician Sam Browne, she also owns Findaband.com Nashville, a live-entertainment booking agency that books bands for venues around the country.

If you could play with any musician, who would it be? “Bonnie Rait. It doesn’t matter who I’m on tour with, if she calls, I’m out.”

What would you change about the music industry if you could? “I would make it equal so people of all genders and backgrounds and ethnicities and sexual orientations could truly have a fair shot on their merit. It’s still an old white man’s club in a lot of places. I’ve been lucky to be with inclusive and progressive thinkers, but I’ve heard of horrifying stories.”

What’s most profound about this time of quarantine for you as a musician? “It’s having music ripped away. That makes you question your identity. Everyone was flailing [in Nashville, her usual home] and asking themselves the same questions: Who am I without this? What do I do with my time? If there’s no reason to play, do I still like to play, and if I don’t, what does that mean?”