Kombucha has become a popular beverage in Door County restaurants, but you’ll rarely find it on the menu. The drink, a fizzy fermented tea, is a favorite of many local kitchen staffs. 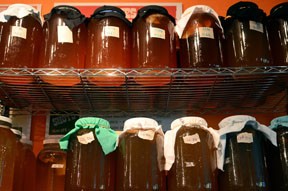 Nelson-Deviley makes 150 gallons of kombucha, a probiotic, fermented tea, each week out of the space that used to be the Getaway Car juice bar in Fish Creek. She is looking for another facility in order to increase her production to 250 gallons a week. Photo by Katie Sikora.

“People get addicted to it,” said Mary Nelson-Deviley, owner of Tapuat Kombucha in Fish Creek. “It’s refreshing and it does keep you going.”

Kombucha is made by mixing tea, sugar and a starter culture, then letting the concoction ferment. Nelson-Deviley uses different teas and sometimes adds other ingredients to flavor brews. She has 10 flavors, like blueberry, lychee peach and ginger.

The drink is foreign to most, but Nick Deviley, Nelson-Deviley’s husband, said once people try it they keep coming back.

“What I’ve noticed the most is people’s reaction when they first look at it, particularly men,” Deviley said. “They’re really scared of it, but if I can get them to drink it they always ask for more.”

Some, like Wickman House executive chef Mike Cheslock, opt for kombucha over other drinks like Gatorade because it’s a healthier alternative.

Kombucha is a probiotic, meaning it contains healthy bacteria and yeast that aid digestion. According to Nelson-Deviley, it has a number of health benefits like helping the body regenerate cells, strengthen eyesight and even prevent cancer.

“We need our nutrients, and it’s so healthy for you,” Cheslock said. “For mind, body and soul – that’s how I think of it.”

Mind, body, soul – and hangovers – according to Nate Reifsnyder, a cook at the Bayside Tavern in Fish Creek. Reifsnyder doesn’t drink coffee, and prefers kombucha to soda while he’s working. He goes through a case of the stuff every week, and often orders more for other tavern employees. 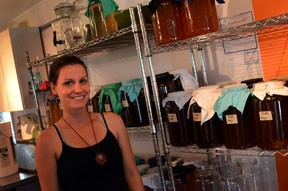 Brett Johnson, a cook at the Whistling Swan, agrees. He drinks a few bottles a week, and drinks more on busy, hot or stressful days of work.

“It’s definitely a morale booster,” Johnson said. “All the probiotics and tea make your stomach feel happy, and I feel like it makes you a little more mentally alert.”

“It’s not a huge seller,” said Joelle Polsin, assistant manager and server at Wild Tomato. “People who haven’t tried it are sometimes hesitant.”

That hasn’t stopped the employees. Polsin said the staff sometimes buys up the whole stock before they get the chance to sell it.

“All of the staff drink it like crazy,” Polsin said. “They love it.”

Mike Holmes, co-owner and bartender at the Wickman House, has big plans for the drink. It’s effervescent, it’s unique and it makes for a great cocktail.

“We’re really interested, when we get our full liquor license, to use it for a cocktail here or there,” Holmes said.

Holmes has been bartending for 13 years and wants to experiment with kombucha in his cocktail called the pearachino – a mix with vodka, maraschino liqueur, bitters, simple syrup and, normally, pear nectar. He wants to try substituting the nectar with Tapuat Kombucha’s pear flavor instead.

The Wickman House is striving to use as much local food as possible, and local kombucha cocktails would fit right in.

“It’s great to have a resource like that, to wrap my head around the ideas of what else is out there,” Holmes said. “Kombucha is such a cool thing.”

Kombucha Kamp, a website Nelson-Deviley points to for information on the brew, says the drink detoxifies and improves efficiency of the digestive system, like other fermented foods. The site also advises that new kombucha converts start with drinking four to eight ounces on an empty stomach twice a day, then drinking plenty of water to help flush toxins from their bodies.

Nelson-Deviley has been brewing kombucha for five years. She makes 150 gallons of it each week, and wants to increase production to 250 gallons. She and Deviley closed the Getaway Car juice bar in Fish Creek and now use the building as a production space for their kombucha. They’re looking for a larger space to brew, but don’t plan on opening another storefront.

Tapuat Kombucha is sold in shops around northern Door, like the Fish Creek Market, Luna and Base Camp coffee shops and Main Street Market, and in health food stores as far south as Green Bay.