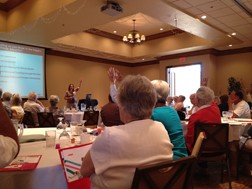 Lisa Lamkins of AARP led a discussion for 70 seniors at Stone Harbor Resort July 11. As part of the “You’ve Earned a Say” program, seniors were able to voice their opinions on Social Security and Medicare. Photo by Matt Ledger.

The discussion, which took place at Stone Harbor Resort in Sturgeon Bay, was part of a series of national town hall meetings that are being hosted by AARP, called “You’ve Earned a Say.” The point of the meetings, according to AARP presenter Lisa Lamkins, is to make sure that citizens’ opinions on Social Security and Medicare are reaching Washington.

“A lot of talking is going on behind closed doors,” said Lamkins, “but we think that people who rely on the program, and who have paid into the program, have the right to know what’s being discussed and to have their voices heard.”

Originally, attendance for the meeting was capped at about 40 people, but Lamkins said that the waiting list was so long that AARP decided to open the meeting up to more. About 70 people, including a representative for Congressman Reid Ribble, were in attendance, and many pitched in on a fairly in-depth and lively discussion about the reform options that were presented.

This will, within the next 20 years, lead to a sizeable Social Security funding shortfall, with only 75 percent of claimed benefits able to be paid.

When Lamkins polled the crowd of seniors at Stone Harbor, almost all of them said that Social Security was very important in their day-to-day lives. And when she presented some of the proposals circulating through Washington to fix the program, they had some thoughts on the matter.

Almost 82 percent of Social Security is funded through payroll tax. A proposal to increase or eliminate the payroll tax cap, which makes it so that Social Security tax is applied only to annual earnings of up to $110,000, was probably the most popular one discussed at the meeting.

“One of the proposals is to include, especially for higher-income folks, all income – earned and unearned,” answered Lamkins.

Proposals to cover some of the spending gap by altering the Cost-Of-Living-Adjustment, which is usually factored into benefits, or raising the full retirement age, which is the age at which a person can receive Social Security, were less popular, with the proposal to raise the retirement age drawing a lot of fire.

The full retirement age has been increasing by two months each year since 1983, and will eventually reach age 67. Some Washington proposals would increase the age to 70.

“There’re a lot of people in construction-type work, and they physically could not work until 70,” said one Brussels woman.

Another Sturgeon Bay man wondered what increasing the retirement age would mean for young workers.

“All I see up there, if we’re all working ‘til age 70 instead of 67, is that unemployment is always going to be a problem,” he said. “Younger workers are going to be looking for jobs that are taken by people with existing influence.”

Lamkins said that the young workers argument has come up at every one of the informal meetings she’s hosted, but it’s not something that has been on the radar of most experts.

Medicare, the United State’s national social insurance program, is confronting a lot of the same demographic challenges as Social Security. In addition, health care costs are constantly on the rise, which has led to Medicare becoming a larger and larger piece of the national budget.

The Medicare reform proposal that the crowd discussed would change Medicare from a voucher plan to a premium support plan.

Right now, people using Medicare can go to any provider who accepts Medicare and then ask Medicare to partially reimburse the costs of their medical care. Under a premium support plan, beneficiaries would receive a fixed amount of money from the government and then be responsible for choosing their own private health insurance plan. If their medical costs went above the fixed amount provided by the government, they would have to pay that out of pocket.

The premium support plan proposal would allow Medicare to stay on a fixed budget, but there is also a danger that the fixed amount provided by the government would not keep up with rising healthcare costs.

And while premium support allows for a large amount of choice in medical care, it will also require those looking for insurance to do a lot of research. At the meeting, disapproval for the premium support reform plan was fairly unanimous.

While the crowd only had time to discuss one of the 15 proposals circulating through Washington regarding Medicare, details on all of the proposals concerning both Medicare and Social Security were provided via explanatory booklets that attendees could take home with them. Some of that information is available online at http://www.earnedasay.org, which also includes a survey that AARP is using to collect the thoughts of those who can’t make it to a meeting.