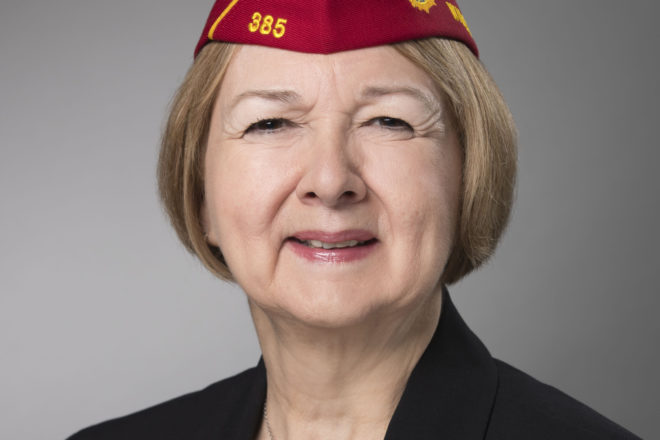 On the day after the American Legion proved its belief in gender equality by electing its first woman to the office of national commander – veteran and military wife Denise Rohan of Verona, Wis. – President Trump issued his military transgender ban.

Asked in a telephone call from the Pulse where the American Legion stands on the transgender issue, Commander Rohan did not hesitate.

“That seems to be the question of the day,” she said. “We were founded on the principles, basically, of justice, freedom and democracy. We want to make sure we have a strong national defense. As long as someone is able to do the job, there shouldn’t be anything that disqualifies them from doing that job. We don’t like the idea of hatred and arbitrary discrimination. We are all veterans. We are not military experts. So we are hoping that the judgment and decisions come down to senior leadership in the military.”

And that appears to be exactly what is happening, with the Aug. 29 announcement by Defense Secretary Gen. Jim Mattis that he was freezing the transgender ban until a panel of experts could look into the issue.

Rohan will be the first to admit that even the American Legion has had gender issues.

“During my acceptance speech yesterday [Aug. 24], I told the story that about 37 years ago an American Legion recruiter came to our house to recruit my husband,” she said. “I identified myself as an eligible veteran for the Legion. They told me I could join the American Legion Auxiliary, which I am also eligible for, but I am eligible for American Legion membership as a member of the military in wartime. It sort of made me feel bad about the organization, but we moved to a new town a couple of years later and I was welcomed with open arms into that particular American Legion post.”

Rohan wants her landmark year as commander to be the most open and welcoming year the American Legion has had since it was formed in 1919.

“One of the things I want to make sure I get the message out there – I know there are women out there who may have had the same experience I had, but also males who may have gone into a legion post and for one reason or another felt it was not a fit,” she said. “I believe the American Legion should be like another home to you because they are your brothers and sisters who you served in arms with. So if you went to an American Legion post and it didn’t feel right, I ask you to give us another chance and check us out one more time.”

Rohan said the reality that she will go down in Legion history as the first female commander is still sinking in.

“We have two million members, and just the thought of being the one – male or female – it’s amazing in itself,” she said.

And beyond aberrations at individual posts, Rohan said since its inception, the American Legion has supported gender equality.

“I always think of myself as a Legionnaire first, because that’s how I serve the organization, and I just happen to be a female,” she said. “It is exciting to be the first female national commander of the organization, however, the legion was founded way back in 1919, so this is our 99th convention, and ever since our founding, women have been a part of this organization. When it was originally formed, they had the foresight to say that a veteran’s a veteran, regardless of their religion, race or gender. So women could actually be a part of the American Legion and vote for national commander before they were able to vote for president of the United States. Women have been serving in leadership positions for a long time. It’s just that I get to be the first in this position.”

Wisconsin has had only one other national commander, Keith Kreul of Fennimore, Wis., who was elected in 1984.

Rohan said her theme for the year is “Family First.”

“I’m a veteran myself and I’m also a military wife,” she said. “I sort of have a unique perspective because I’ve seen both sides of how the military works, and being the spouse of a veteran, how much families are involved, too. We always talk about taking care of our military personnel, but when you’re at a sendoff or a deployment and you’re asking what we can do to help them – their answer is always the same, take care of our families.”

Rohan hopes the Family First approach is a major inducement to recruitment for the aging organization.

“We’re always hoping to recruit veterans from all eras,” she said. “I am hoping with that theme, younger veterans who have children will take a look at all the programs the American Legion has.”

“We’re hoping veterans will see all we’re doing and will say, ‘Hey, it’s time for us to pay it forward, too’,” she said.

An even bigger push to open up American Legion posts to the community will happen on Nov. 11, Veterans Day.

“We are going to open up the posts and say, come in. We’re trying to have the largest Veterans Day dinner across the nation on Nov. 11 by opening up our post homes and welcoming people in to see what we do and who we are. I hope there will be a sense of the American Legion doing all of these wonderful things.”