Charlotte and I have been spending considerable time in search of mushrooms lately. Her week-long class at Björklunden has come upon and collected dozens of species of various sizes, shapes and colors, one of the better years for these fascinating organisms she’s experienced in a long time. Undoubtedly the copious amount of rain we’ve received in recent weeks has been to the mushrooms and her benefit.

An anticipated question at the start of her field class is, “What is the difference between a mushroom and toadstool?” Generally, the word toadstool referred to a poisonous mushroom dating back centuries, and now we prefer to just use the word mushroom.

Often the next question asked is, “Are those mushrooms poisonous or are they safe to eat?” One has to know the exact identity and refer to good field guides to learn the answer.

Mushrooms cannot make their own food because they have no chlorophyll. People did not understand them and how they grew. However, various nationalities gradually learned to make use of an increasing number of species as food, keeping note of those which poisoned people.

Even though we feel very secure in eating about a dozen species of mushrooms, it has come about only as a result of a lot of study and especially learning with experts in the field. We are convinced that one of the very worst ways to go about collecting mushrooms is to just compare them to a picture in a book to decide whether they can be consumed. Most poisonings happen due to ignorance and carelessness. 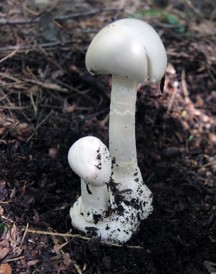 Serious or fatal poisoning can result in eating the Destroying Angel, Amanita bisporigera.

Here are some of the things we include in our study of mushrooms in order to ensure positive identification. Be aware of where the mushroom was found. What trees were growing nearby? As an example, an edible and choice one, Suillus pictus, always grows near White Pine trees. Its season here is mid-August to September and its cream and maroon mottled cap, plus its spore tubes, make it an unmistakable species.

Check the membrane (referred to as the annulus or ring), if it has one, on the stem. This can be an important clue to identification. Does the underside of the cap have tubes, gills or small pointed teeth, such as the Dentinum repandum? This is one of the choicest of all mushrooms and ranks with the morels.

One of our very favorites and extremely easy to recognize is the Shaggy Mane, one of the so-called inky caps. This has a soft scaly cylindrical cap and pushes out of lawns or hard ground, sometimes even breaking up asphalt pavement.

Naturally the Shaggy Manes must be picked and cooked before they turn inky or even dark. Do not refrigerate them until they are cooked. Eat them soon after they are picked. They are scrumptious sautéed in butter and combined with scrambled eggs. It is absolutely vital that you do not consume alcohol, as much as 72 hours before or after eating of the Shaggy Mane’s close relative, the Smooth Inky Cap, Coprinus atramentarius. A violent headache or nausea, or both, may follow!

The manner in which the gills are attached to the stem will often aid in “keying out” your specimens. Cut one lengthwise with a sharp knife for a close look at this feature. The colors of many mushrooms change as they grow. Even the color of the bruises of some will often offer important clues.

Does the mushroom grow from a cup (called a volva) in the ground? Some of the world’s most deadly mushrooms appear to grow out of a cup or from a bulb. One of these is the Destroying Angel, Amanita bisporigera. An eminent biologist told us that one cubic centimeter (less than a half-inch cube) eaten is enough to kill a person! One person, who did eat a portion of this deadly species, lived to say that the mushroom tasted very good. However, it has been found that those who erroneously ate this species died a slow agonizing death over a week to 10 days.

Knowing the spore color is vital to proper study of mushrooms. Cut off the cap of a fresh specimen at the very top of the stem. Place the cap on white paper and cover with an empty cottage cheese or similar container for several hours or overnight. It is better that you do not use black paper in order to show up the light colored spores better. This makes differentiating between, for example, white and very light tan spores very difficult. The difference between very light-colored spores becomes evident when put onto white paper. 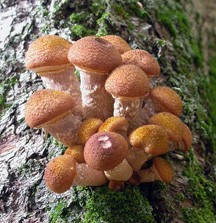 Roy and his dad collected the Honey Cap, Armillaria mellea, almost every autumn.

Avoid eating mushrooms in the button stage because at this young age, edible species can too easily be confused with poisonous types. Most important, ignore all sayings which simplify determining if the mushroom is edible or poisonous. Rather, approach the study seriously, and best of all, in the company of a very experienced individual.

I am continually reminded of my dad and many of his Bohemian friends who, for many years, were content to pick only one species, the Honey Mushroom, Armillaria mellea. They knew where and when to search for these delicacies and knew them extremely well. Charlotte and I also rank this species among our favorites, and we continue to practice my dad’s rigid rules of picking.

A good many of our friends have chosen a very safe and wise route to follow. They photograph, admire, study and read about mushrooms to their heart’s content, but when it comes to eating them, they prefer the store-bought species!