The grind of the summer season in Door County can wear on those who toil in the restaurant industry, so when Tonda Gagliardo began to feel a little off-balance toward the end of August in 2003, she didn’t think it was serious.

Then Gagliardo, the general manager at the Mission Grille in Sister Bay, began to feel tingling down both arms down to her fingertips, which went numb. She first attributed it to a minor car accident she had recently been in, as did her chiropractor. Then in November her condition took a scary turn.

“In early November I lost sight in my right eye,” she says. “I was scared.”

What began as spotty, blurred vision on Saturday descended into complete darkness in her right eye by Monday. An MRI and a visit to the ophthalmologist confirmed that she had optic neuritis, a strong symptom of Multiple Sclerosis.

Ironically, the diagnosis came as a relief.

“My uncle had passed away from a brain tumor,” she says, “so I kept thinking I had one.”

Gagliardo is one of an estimated 10,000 Wisconsinites with Multiple Sclerosis, commonly known as MS, a chronic disease that affects the central nervous system. 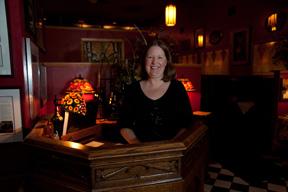 Tonda Gagliardo of the Mission Grille in Sister Bay was in denial about her MS diagnosis until a scare in 2007.

From Sept. 24 – 26, over 111 walkers, and dozens more in support crews, will take part in the MS Challenge Walk in Door County to raise awareness and research funding to find a cure for MS.

Last year the walk raised over $265,000 for the cause, and the walk is not a challenge in name only. Participants must raise a minimum of $1,500 to participate, and commit to walking 50 miles over three days.

“It’s a really important event for us,” says Dawn Thaves, Director of Marketing and Development for the Wisconsin Chapter of the National Multiple Sclerosis Society. “This is our third year in Door County. It’s a great destination, and we wanted a place where we could bring some people that they would truly enjoy and want to come back to.”

Treatment for MS has progressed rapidly in the last 20 years. It was only in 1993 that the first drug addressing relapsing-remitting MS, the most common type of the disease that involves periodic flare-ups followed by partial or full recovery, was approved by the Food and Drug Administration. Three years later a study showed that aerobic exercise was beneficial for MS patients. Previously it was recommended that patients avoid physical activity.

The advances are helping people like Gagliardo live full lives with the once-crippling disease. After her initial diagnosis, Gagliardo was in denial. She refused to take medication, instead treating her disease holistically after the initial steroid treatments calmed her symptoms and returned some of her vision.

But a relapse in the summer of 2007 put an end to her denial. Personal stress and the hot, dry summer caught up to her.

“My entire body felt like it was on fire,” she says. “If you put your hands on a flat-top grill, that’s what I felt like.”

After visits to her neurologist, whose diagnosis was confirmed by doctors at the Mayo Clinic in Rochester, MN, Gagliardo finally decided to tell her friends and staff about her condition.

“I wasn’t able to do my job to the fullest anymore, to do all the things that our staff had come to expect of me,” she said. “I realized it would be easier to tell them than to hide it.”

She knew she had a good staff, but that difficult summer made her realize the depth of the friendships they had formed. Her husband and co-general manager Karl Bradley was there, as was her brother-in-law Bryan Bradley, the chef, but the rest of the staff responded as well. Until then, she had always felt like she had to take care of her employees, but now, “the roles were reversed.”

“That summer they all just took over everything,” she says. “Every day they were checking with me, making sure I was okay, taking things off my plate. I found that it’s a lot easier to manage when people know what’s going on.”

Melissa Jacobs, who has worked at the Mission for 10 years, was one of several employees Gagliardo leaned on.

“That summer was difficult for her,” Jacobs recalls. “All we could do was support her and do what we could to help with the restaurant. With her job, it’s people in her ear – ‘Tonda, Tonda, Tonda’ – all day long.”

Multiple Sclerosis is a disease you manage, Gagliardo says, which she does by taking injections of medication three times a week, following a diet high in olive, canola and fish oils, and striving for balance in her life, as flare-ups can be triggered by stress.

“I monitor my hours, and I’ve learned to delegate more,” she says. “I also do yoga. Before, I was all about work. I didn’t take time for myself.”

She got involved with the MS Challenge Walk three years ago, hoping to spread awareness about a disease that is little understood.

“I’m not a shy person about it anymore,” she says. “I hope I can be of help to somebody going through this.”

She feels fortunate that she has relapsing-remitting MS, the less severe type of the disease. Though difficult, Gagliardo knows others have more progressive strains that can quickly put patients into a wheelchair.

By telling her story, she hopes others can tell theirs, and the pace of research can pick up, one step at a time.

Live Music by the Mullet Hunters

Details: Over 111 walkers will take on 30 and 50-mile routes to raise at least $1,500 each for Multiple Sclerosis research. Since 1990, the National MS Society has awarded over $14 million in grants to support Wisconsin-based MS research projects.