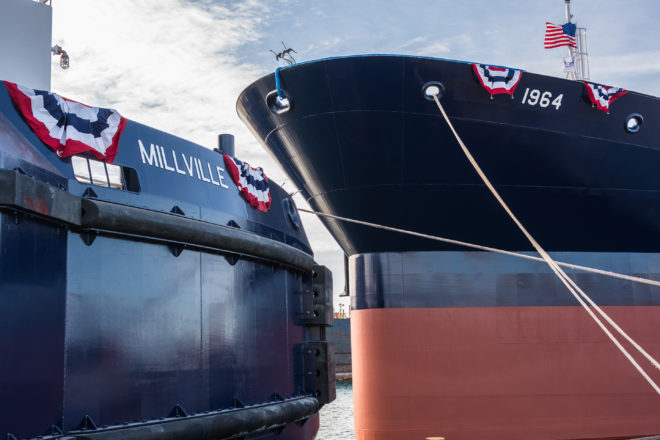 Christening of the tug ‘Millville’ and the barge ‘1964.’ Photo by Len Villano.

The 130-foot articulated tug barge Millville and the 578-foot barge 1964 will help Wawa provide 17,000 barrels of fuel per day to Florida.

“I, for one, and I think a lot of us are in awe of what we see this morning,” said Brian Schaller, vice president of fuel at Wawa, to a crowd of hundreds, a majority of which were Bay Ship employees. “We were pleased our two companies could work together on this project.”

The Millville is named after the Pennsylvania town where the Wood family, founders of Wawa, opened their first iron foundry and textile mill. The first Wawa Food Market opened in 1964.

“This ship could have been built anywhere in the country and they chose to come here to little old Sturgeon Bay, Wisconsin, for a lot of good reasons and I don’t think we disappointed at the end of the day,” said Todd Thayse, vice president and general manager at Bay Ship.

“I don’t think this is the last one so we look forward to seeing him back here again,” said Thayse, confident this is the start of an ongoing relationship between the two companies.