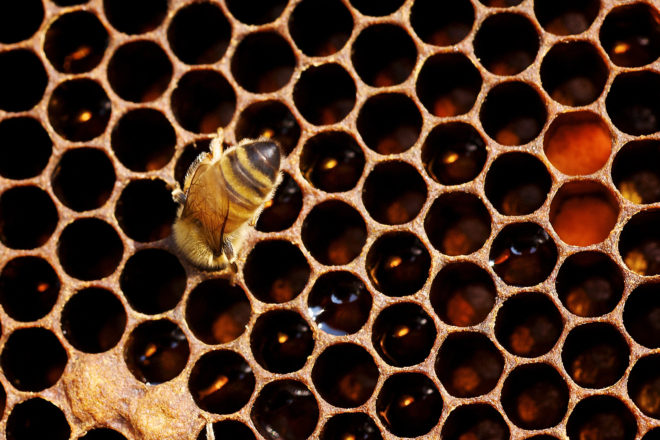 After his first year as a beekeeper, Mark Lentz has become something of an evangelist for the cause of keeping bees.

The Brussels resident retired a couple of years ago and began reading articles about the environmental benefits of beekeeping.

“The more I looked into it, the more I was interested,” Lentz said.

He was particularly taken with the importance of bees in pollination. For example, an estimated 1.7 million colonies are needed each February to pollinate California’s most valuable crop – almonds. At $287 an acre for almond pollination, according to the U.S. Dept. of Agriculture, honeybee pollination is close to a $300 million business just for California almonds.

Research has shown a higher yield and better fruits, nuts and vegetables when they are pollinated by bees or other insects and animals, rather than by the wind or by self-pollination. A 2000 report estimated that honeybees are worth $14.6 billion to the agricultural industry.

About this time two years ago Lentz learned that an introductory beekeeping class was being held at the Peninsular Agricultural Research Station just north of Sturgeon Bay, taught by master beekeeper Max Martin, who also serves as president of the Door County Beekeepers Club.

“I wanted to take Max’s class, but by the time I heard about it, it was full,” Lentz said. “He steered me to a sister club, the Brown County Beekeepers Association. They had a class about two weeks later. It was a one-day class and was extremely beneficial to me. It gave me a foundation. I would strongly encourage anybody to take the class. It’s a good idea.”

After completing the class, Lentz continued his research into beekeeping and then last year pulled the trigger by purchasing a beekeeping kit for about $175. 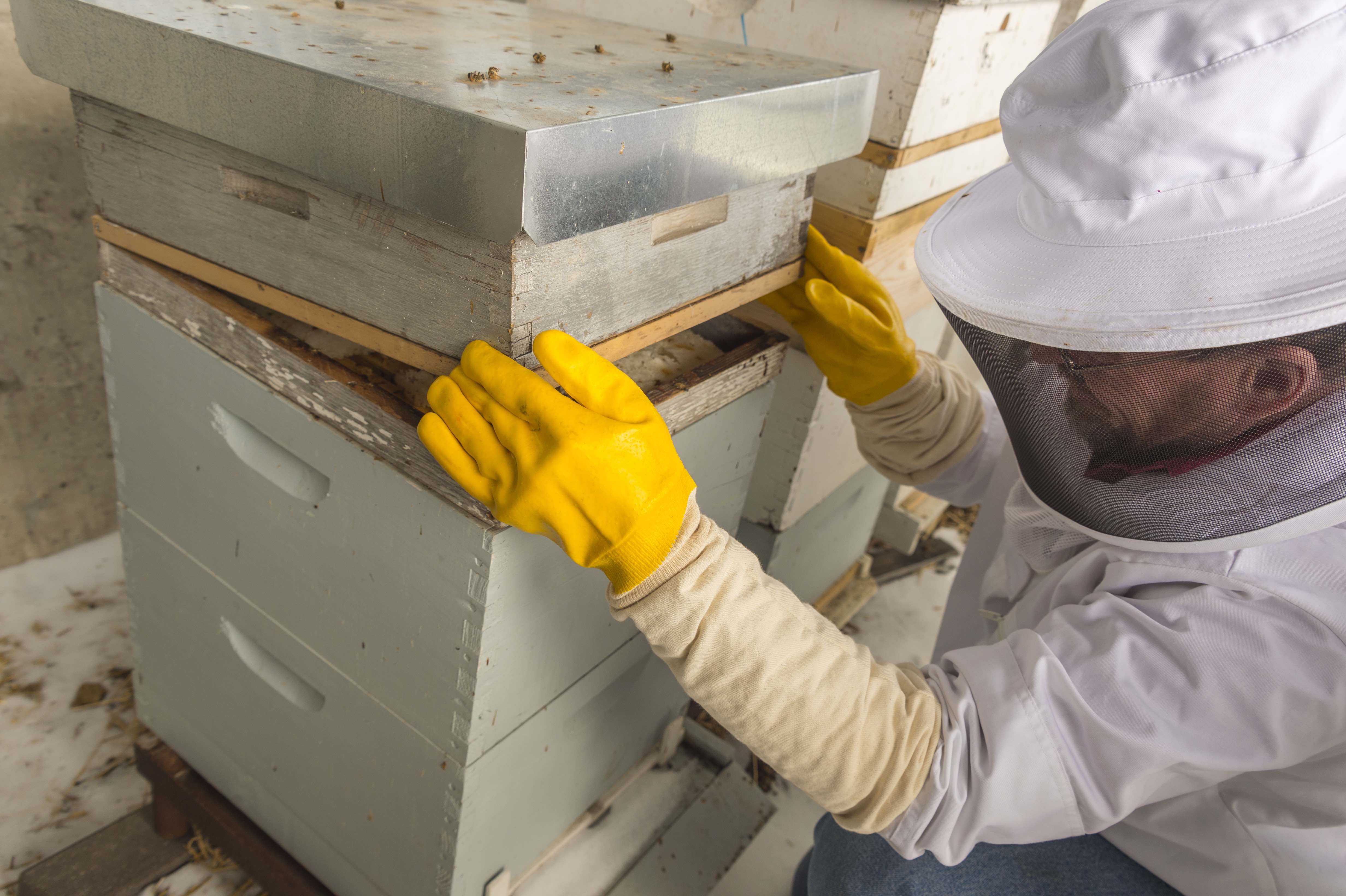 Max checking his hives. Bees are active all winter and must keep feeding to stay warm and keep the hive at a appropriate temperature. Beekeeper Max Martin discusses the challenges of maintaining honey bee hives in Door County. Photo by Len Villano.

“That pretty much got me into the hobby, and then it just depends on how much of a beekeeper you want to be,” he said.

Shortly after he took the class, Lentz joined the Door County Beekeepers Club, because he said a common comment in the many things he had been reading about keeping bees suggested joining a local club.

“I didn’t get into bees the first year,” he said. “But I went to meetings and took copious notes and tried learning as much as I could. I found it extremely beneficial to talk to people. They started about three years ago, but it has grown remarkably strong, with about 80 members. They are a great resource to new beekeepers such as myself. We meet monthly. It seems there’s always new people attending.”

Lentz also points out that it is not a complex or time-consuming hobby, especially this time of year when the hive is essentially dormant.

“They’re alive,” he said. “In an average hive there’s probably in the neighborhood of 4,000 to 5,000 bees nestled together, protecting the queen. She needs to be warm. They’re feeding off the honey reserves they produced in the summer and protecting the queen so she can start laying eggs again in a couple months.”

That means not much for the beekeeper to do but wait.

“If we get some warm weather in February, I’ll probably take a peek at them, but there’s not much going on until April,” Lentz said. “Once you get your bees established in a hive, it’s just periodically checking on them, making sure they are still active, that the queen is laying eggs, and that you can see them coming and going to the hive.”

While Lentz said being able to harvest honey is a side benefit for him, others in the club harvest enough honey to sell to area retailers.

“A single hive producing well, you’ll get about 60 pounds of honey, and that’s a lot of honey,” Lentz said. “You don’t need to have all kinds of beehives to have a lot of honey.” 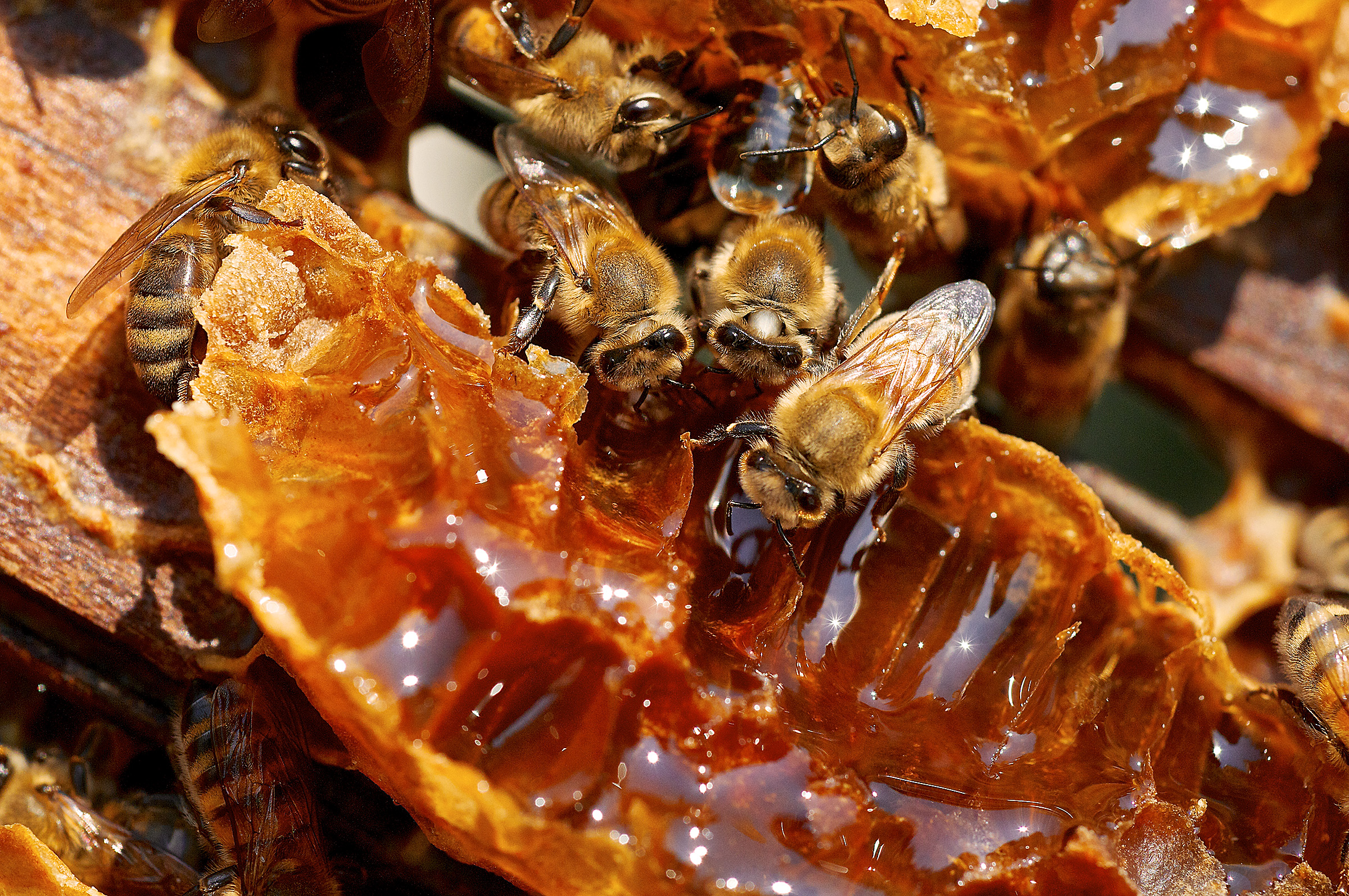 Bees producing honey which is then scraped off before returning the hive panels. Photo by Len Villano

Lentz said the first question most people have has to do with being stung.

“Honeybees are not aggressive,” he said. “I rarely wear protective clothing. If they don’t feel an aggressive threat from you, they won’t sting because they’re not an aggressive bee.”

He also credits them with a certain amount of intelligence in that “they get to recognize the person taking care of them,” or, he adds, “They just don’t pay any attention to me.”

When he first got the bees from southern California, he could see that his presence was disturbing to them.

“I would walk out there and I would see an increase in their activity. They would flight in and out faster,” he said. “Now they just go about their business without any change when I’m there.”

That goes for his yellow lab, Sawyer, as well.

“He follows me up to the hive all the time and sticks his nose right in without any trouble,” Lentz said.

Learn How to Keep Bees

A class for beginning beekeepers is being held Saturday, Jan. 20, from 8 am to noon at the Peninsular Agricultural Research Station, 4312 Hwy. 42. The class is taught by master beekeeper Max Martin, president of the Door County Beekeepers Club. The class is limited to 20 students, so reserve a spot by calling Martin at 920.743.8457 or via email at [email protected]. Cost of the class is $25.

If you can’t make the class but are still interested in learning more about beekeeping, the Door County Beekeepers Club meets monthly and is a great way to learn about the hobby and perhaps find a mentor. The next meeting is 6:30 pm Tuesday, Jan. 23, at Crossroads in Sturgeon Bay.