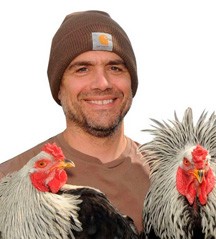 Author Michael Perry will speak at the Trueblood Performing Arts Center on Oct. 26.

Michael Perry is kind of a big deal. Let me put it in terms all Wisconsinites understand – what Aaron Rodgers is to our beloved Green Bay Packers, Perry is to Wisconsin literature. If I saw him in public, say the Piggly Wiggly or local library, I would follow him around, peek around aisles, stare at him for about twenty minutes before gaining the nerve to say, ‘Excuse me. Hi. Are you Michael Perry? I’m a big fan!’ I’d ask for a photo and promptly post it on Facebook.

The New York Times bestselling author, humorist and radio show host from New Auburn, will journey to Washington Island on Oct. 26 and speak at 4 pm at the Trueblood Performing Arts Center. He’s a damn good writer.

I was introduced to Perry’s writing in college, when my roommate, a nursing major coincidentally from New Auburn who liked Law & Order SVU, country music, and Nicholas Sparks novels, handed me Population: 485. She knew of Perry, saw him out and about when she visited home. “Yeah, he’s cool,” she said.

After I read the book, I was concerned she didn’t understand what a big deal he was, how eloquently, humorously and reverently Perry depicted rural Wisconsin:

“I do my writing in a tiny bedroom overlooking Main Street in the village of New Auburn, Wisconsin. Population: 484. One four-legged silver water tower. Seasons here are extreme. We complain about the heat and brag about the cold. Summer is for stock cars and softball. Winter is for Friday-night fish fries. And snowmobiles. After a good blizzard, you’ll hear their Doppler snarl all through the dark, and down at the bar, sleds will outnumber cars.”

He’s also a damn good speaker. I attended a Michael Perry book signing event in early August, hosted by Novel Ideas in Baileys Harbor. I expected little more than a line, a handshake, a short conversation and farewell. Perry spoke for over an hour. He entertained the packed crowd with readings from his newest book, Visiting Tom, and stories about sneezing cows, kidney stones, and awkward hugs with his stepdaughter’s very tall father.

When I approached him in the book-signing line the English major in me was freaking out like a 14-year-old at a One Direction concert.

“Hi, my name is Sally. I’m a writer too. I write for the local newspaper. I tweeted about you.” I said that. Very, very fast. To Michael Perry.

He smiled, praised my typo-free tweet and signed my copy of Population: 485. A book that taught me a very valuable lesson at the onset of my college education: you don’t have to write about exotic lands and make-believe characters to capture a reader’s attention. The country found interest in this man’s stories about life in rural Wisconsin.

The Trueblood Performing Arts Center is located at 870 Main Road on Washington Island. For more information or to purchase tickets ($15 for adults and $10 for students) visit truebloodpac.com or call 920.847.2528.