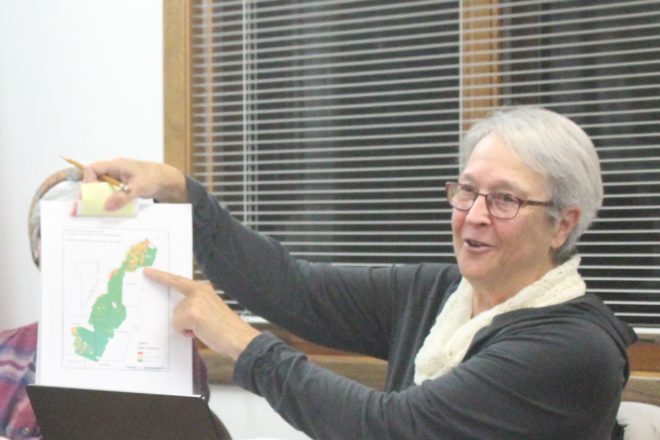 Christine Reid, of the Friends of the Forestville Dam, points to an airborne electromagnetic map during a Jan. 10 informational meeting at the Forestville Public Library about S&S Jerseyland Dairy’s proposed expansion. The map shows that much of southern Door County has a shallow soil depth above the bedrock. Photo by Kevin Boneske.

S&S Jerseyland Dairy intends to increase its existing operation from the 7,654 animal units it reported a year ago to 14,711. The expansion plan is part of the farming operation’s permit-renewal application with the Wisconsin Department of Natural Resources (DNR). The DNR has scheduled a public hearing for Feb. 7, 10 am, via Zoom to consider renewing the dairy’s Wisconsin Pollutant Discharge Elimination System (WPDES) permit for another five years.

Those in attendance at the Jan. 10 meeting expressed concerns about the impact the expansion could have on water quality, especially where there are shallow soil depths. Terry McNulty, who serves as the Village of Forestville board president, questioned how the dairy could have enough acreage to handle a doubled amount of manure.

“There is no more land out here, so I don’t know how this [expansion] could happen,” McNulty said. “Even if they have a digester [for processing the manure], I don’t have any faith that [digesters] actually work for thousands of cows.”

Digesters break down manure and produce what’s known as biogas, which can be collected for use as fuel, and digestate for fertilizer.

As of last April, S&S Jerseyland Dairy, which is owned and operated by the Schmidt family, had greater than the required minimum of 180 days of storage for manure, the DNR notice further states.

Village trustee Lora Jorgensen, who noted that there are more than 200 private wells in the village that are susceptible to contamination, said she wouldn’t object to S&S Jerseyland Dairy being reissued a permit for its current herd size, but not for the proposed expansion.

“What happens if, a year from now, after [DNR officials] already grant this permit to expand or add all these animal units, what happens then if [state regulation related to the land spreading of manure] changes again and [the DNR says] we can only spread half as much manure on the land?” she asked. “Where do we all of a sudden get land on a peninsula that has water on both sides?”

The DNR announced that it has tentatively decided to renew the WPDES permit. The permit is required for concentrated animal feedlot operations (CAFOs) – defined as operations with 1,000 or more animal units – to ensure that those large-scale farms use proper planning, nutrient management and structural construction to protect Wisconsin’s waters. The state agency will make a final determination on the renewal application after the Feb. 7 hearing.

When S&S Jerseyland Dairy’s previous permit-renewal application was considered in 2017 at a hearing at the Forestville Town Hall, people packed the location. DNR agricultural runoff management specialist James Salscheider said the state agency switched to virtual hearings following the onset of the COVID-19 pandemic in early 2020 and continues to hold those hearings via Zoom.

Dean Hoegger, executive director of the Clean Water Action Council, who was present for the Jan. 10 meeting, urged those in attendance to focus on what the DNR would consider when deciding whether to reissue the permit and allow S&S Jerseyland Dairy to expand.

“[What the DNR considers is] not about what 99% of the people testified about at the last hearing,” he said. “It was a lot of emotional comments and things like, ‘I’m sick of all this sh**’ – you know, that kind of stuff. That doesn’t work.”

The last time S&S Jerseyland Dairy was reissued its permit, Hoegger said the Clean Water Action Council asked questions about the land characteristics where the manure would be spread.

“You really have to go look at those fields and say, ‘Are they tillable? Do they have a slope? Have they accounted for the slope in what they’re saying they can spread on those fields?’” he said. “It’s a really tall order to find anything wrong that the DNR can then say, ‘OK, we’re going to reduce the number of animals, or we’re going to deny the permit.’ It’s really a tough, uphill battle, and I don’t disagree that you need to be expressing concern about groundwater and well water.”

Also on hand at the informational meeting was former Door County UW-Extension agricultural agent Mark Feuerstein, who said he is the crop consultant for S&S Jerseyland Dairy. Feuerstein, who was taking notes during the meeting, said he was present for informational purposes and not to get into a discussion about the permit-renewal application.

The DNR’s application notice states that S&S Jerseyland Dairy has 9,256 acres in its nutrient-management plan, the majority of those (7,808 acres) rented or in contract agreements.

McNulty said he expects the expansion of S&S Jerseyland Dairy would result in more truck traffic in the Forestville area because of hauling manure, which is currently “at times ridiculous. It’s unsafe on Main Street in Forestville when these trucks [are hauling manure],” he said.

McNulty said spreading manure on land zoned agricultural in the village is prohibited as part of Forestville’s nuisance ordinance. Jorgensen said S&S Jerseyland Dairy would be able to truck manure to one of the “satellite farms” it doesn’t own for both spreading and storing manure elsewhere.

“[The expansion] is not only going to add more trucks hauling manure for application, but also just trucking it between the farms to juggle it to make sure one [site] isn’t filling up faster than another,” she said. “So safety wise, roads being destroyed, we’re in big trouble if that [expansion] happens, because we are already struggling to keep our roads passable at this point with the money we’re allocated from the county and the [Wisconsin Department of Transportation] and stuff.”

To get together again prior to next month’s public hearing, the Friends of the Forestville Dam has scheduled another informational meeting for Jan. 24, 6 pm.

The DNR has scheduled a Zoom public hearing for Feb. 7, 10 am, to consider renewing S&S Jerseyland Dairy’s Wisconsin Pollutant Discharge Elimination System permit for another five years. The dairy is proposing to expand its operation to 14,711 animal units – up from the 7,654 animal units it reported having last year.

Complete registration in advance of the Feb. 7 hearing at us02web.zoom.us/meeting/register/tZckf-6rqTsoHNb9HON_pRZSvV9SCXjeOveV