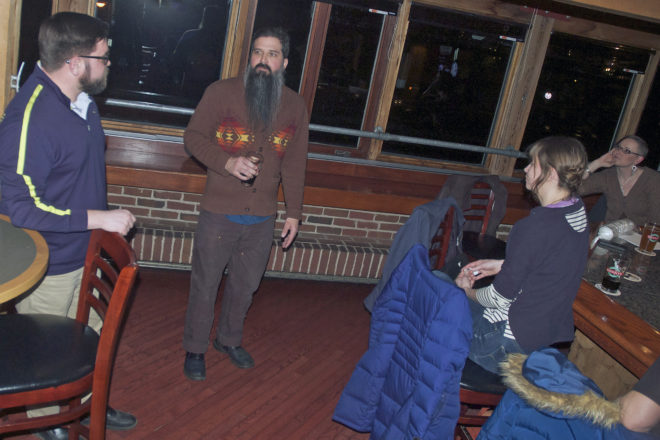 Pizza and beer go together like peanut butter and jelly, but, after many years of attending beer tastings, I was invited to my first beer and pizza pairing last week at Sonny’s Italian Kitchen & Pizzeria in Sturgeon Bay.

Jacob Sutrick, brewmaster at Green Bay’s newest craft brewery, Leatherhead Brewing Co., featured three of his beers paired with three different Sonny’s pizzas chosen by Kay Distributing Craft Manager Matt Mleziva, who started off by explaining why beer pairs with food so much better than wine – wine coats your tongue (palate) but carbonated beer does not. So take that, winos!

Before digging into the pizzas and beer, Sutrick gave a brief presentation on how Leatherhead got started. Sutrick had worked for 13 years in two Milwaukee breweries before joining his cousin, Chad Sharon, in opening Leatherhead. Sharon, a former macrobeer drinker, fell in love with the depth and character of his cousin’s stout, and, boom, a new brewery was born around it.

“The brewery exists because of Full Beard Stout,” Sutrick said. “Yes, it is named for my beard.”

The stout is Leatherhead’s flagship brew.

“We don’t have filters,” he said. “Filters are expensive. I think it tastes better unfiltered.”

This April will mark the brewery’s first year in operation.

Sutrick also talked about the brotherhood of brewing he and Leatherhead have received from the already established craft brewing industry in Green Bay. He said they were greeted with open arms by the other craft brewers.

The tasting began with Leatherhead’s Tractorman IPA, their 4.2 percent session ale. Jason Estes, owner of Sony’s Pizza, then described the offerings on the meat lover’s pizza – the only carnivorous offering of the night.

“The IPA will cut through the saltiness of the meat. It will subdue it a little bit,” Mleziva said in explaining why he chose to pair the two.

It was paired with Sonny’s Meat Lover’s Pizza because, as Mleziva explained, he thought the mild bitterness of the IPA would pair well with the salty meatiness. They did pair well.

Next up was Pritty Pritty WITty, a 5.5 percent witbier brewed with chopped oranges and wit spices, paired with a Cheezy Deluxe pizza. My first taste of the beer was an intense experience. Someone said this was Leatherhead’s Blue Moon, but Blue Moon tastes like ordinary water compared to the flavors in Leatherhead’s wit. After the first few sips, my palate got used to the intensity of flavors and enjoyed the pairing.

The final offering was the flagship Full Beard Stout with a spinach and tomato pizza. Mleziva said the earthy flavors of the pizza should meld well with the stout. They did. This was my favorite pairing of the evening. This seven percent stout has deep coffee tones from chocolate malt.

Leatherhead is available only on draft. The brewery is located at 875 Lombardi Ave., Green Bay. Sutrick mentioned that on March 11 the brewery will tap a stout that has been aging in cabernet wine barrels.