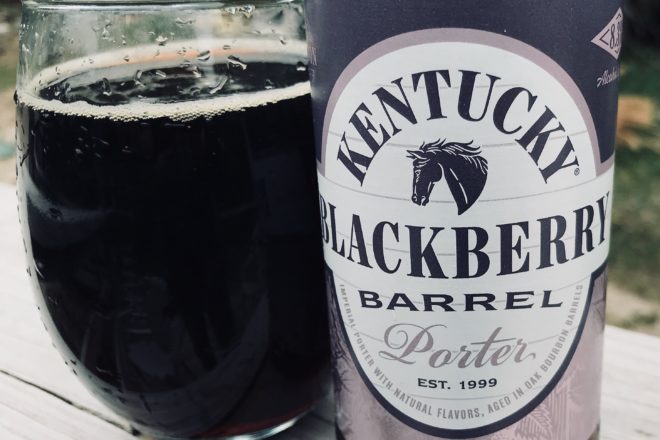 I have a weakness for blackberries. This relative of the raspberry is a nutrient-dense flavor bomb. Ancient Greeks recognized it as a hugely healthful berry, and in 18th-century Europe, it was known as the “gout berry” for its reputed ability to relieve symptoms of that form of inflammatory arthritis that wreaks havoc with one’s big toe.

Although I love raspberries, blackberries are on an entirely different level – the taste and texture set them on a pedestal for me. I wish I had an endless supply of organic blackberries.

Whenever I see any sort of blackberry beverage, I must try it. Such was the case recently with Kentucky Blackberry Barrel Porter, an 8.3 percent imperial porter aged in bourbon-soaked oak barrels.

Oh, what a mighty nice porter this is. The subtle blackberry flavors are locked in a Kentucky two-step dance with the chocolatey porter. Five malts and a single hop – Centennial – are used in the making of this fine beer. The malts are 2 Row Pale, Dark Munich, Crystal 80L, Chocolate and Carapils. The presence of the Chocolate malt is profound yet not overpowering.

I search for any oakiness, but it escapes me, and that’s OK. I have no problem with it taking a far-back pew to the dominant flavors of chocolate-blackberry porter.

Kentucky Bourbon Barrel Ales are the product of Lexington Brewing & Distilling Co., which its website tells us is “one of the few joint brewing and distilling operations in the world.” It was founded in 1999 by Irish entrepreneur Pearse Lyons. He also owns Pearse Lyons Distillery at St. James, a boutique Irish whiskey distillery in a 12th-century church in Dublin; and Dueling Barrels Brewery & Distillery, “nestled deep in the Appalachian foothills of eastern Kentucky.”

In addition to the Blackberry Porter, Lexington does a barrel-aged Coffee Stout, Cream Ale and its flagship Kentucky Bourbon Barrel Ale. What I’d really like to try is its Kentucky Barrel Tequila Wheat. I think tequila barrels would put an interesting twist on a wheat beer.