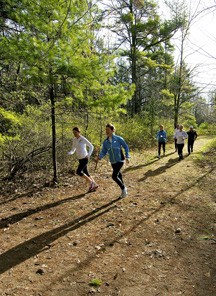 Runners take to the trails of Peninsula State Park. Photo by Len Villano.

My weatherworn shoes kick up the dirt around me and snap a twig or two as I bound through the forest like a modern day Thoreau in training for my next race. Door County boasts an unmatched atmosphere for the silent sports that have been sweeping the nation in recent years. With smooth paved roads and several state parks, it is hard not to take advantage of the many opportunities to get outside for a run or bike ride. Being a Fish Creek resident this season and an amateur but passionate triathlete, I have turned Peninsula State Park into my playground.

The park has a prevalent hiking trail system that proves as a network of running trails with enough loops for any desired distance. Since there is much easier impact on a runner’s legs and a forced awareness to a runner’s footfall, trail running has grown in popularity. With both simple and difficult trails as well as flat shoreline paths to compliment the many bluffs in the area, there is something for every category of runner.

Staying on the Sunset Trail will hold flat for the most part as it follows the lake around the park. Going inland is where the bluffs stretch up and a hilly run can be expected. Skyline trail will provide the most scenic of routes with stops at Sven’s Bluff among other overlooks into the bay. The deep woods are found on Nicolet Bay Trail which can be followed almost all the way to Eagle Tower, one of the park’s most popular attractions. Climbing the 76-foot tower is a nice cap to a long run.

What I find to be the most interesting and beneficial runs in the park, and what I credit my faster than expected marathon time to, was running the two-mile Eagle Trail that loops from the tower, down to the water and back up. This trail is marked as difficult in regards to hiking, which provides for an even more difficult run and is to be attempted by only those who trust in their quick feet. With many steep hills, low branches and encroaching roots, a runner is forced to strictly focus on every step.

Yet most trails within the park are simple and scenic, allowing for something different than pounding pavement for miles. An early morning run can ensure the avoidance of many others on the trails as well as a healthy kick-start to the day.