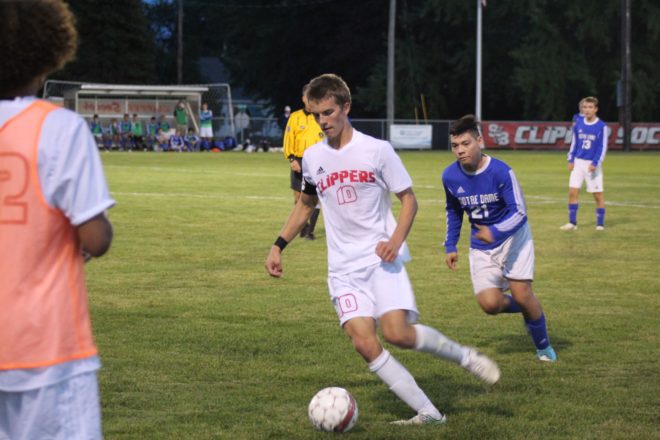 “I never came across a player that wasn’t ready to run through a brick wall for him,” said former Clippers star Jaden Stevenson, 10, of coach Todd Maas. Photo courtesy of the Sturgeon Bay High School Yearbook Flashes Staff.

Sturgeon Bay High School boys soccer coach Todd Maas answered with a quip when asked to pinpoint the reasons behind his program’s success in the last 10 seasons.

Sturgeon Bay has been no joke since Maas took over the head coaching position in 2009. The Clippers have qualified for the state tournament seven times, including a state title in 2015 and a runner-up finish in 2017. Maas has posted a 128-4 mark in the Packerland Conference and an overall record of 196-49-10.

“We’ve constantly pushed the kids to improve every day,” Maas said. “There is no going backwards and no staying status quo or it was a wasted practice and or a game. The main thing is though the guys need to buy into what we are doing as a team. They need to see the big picture and keep in mind what the goals are.”

Sturgeon Bay advanced to the Division 4 state semifinals Nov. 2 and lost 4-1 to eventual state champion University School of Milwaukee. After consecutive losses to Division 1 foes Cedarburg and Germantown left the Clippers with an unspectacular 6-8 record, that state trip did not seem to be in the plans this year.

But those losses reveal another key to the Clippers’ success. Maas said he has created schedules which include higher level non-conference teams during the regular season.

“We play teams in our non-conference schedule that are never easy, always trying to challenge ourselves in big games,” Maas said.

Starting with an 8-0 win over Kewaunee on Sept. 24, Sturgeon Bay reeled off six consecutive wins to finish 12-8, earning the number 4 seed in Sectional 2. After winning the first two rounds of the tournament handily, the Clippers defeated Kohler in penalty kicks and stopped Howards Grove 2-0 in the sectional finals. 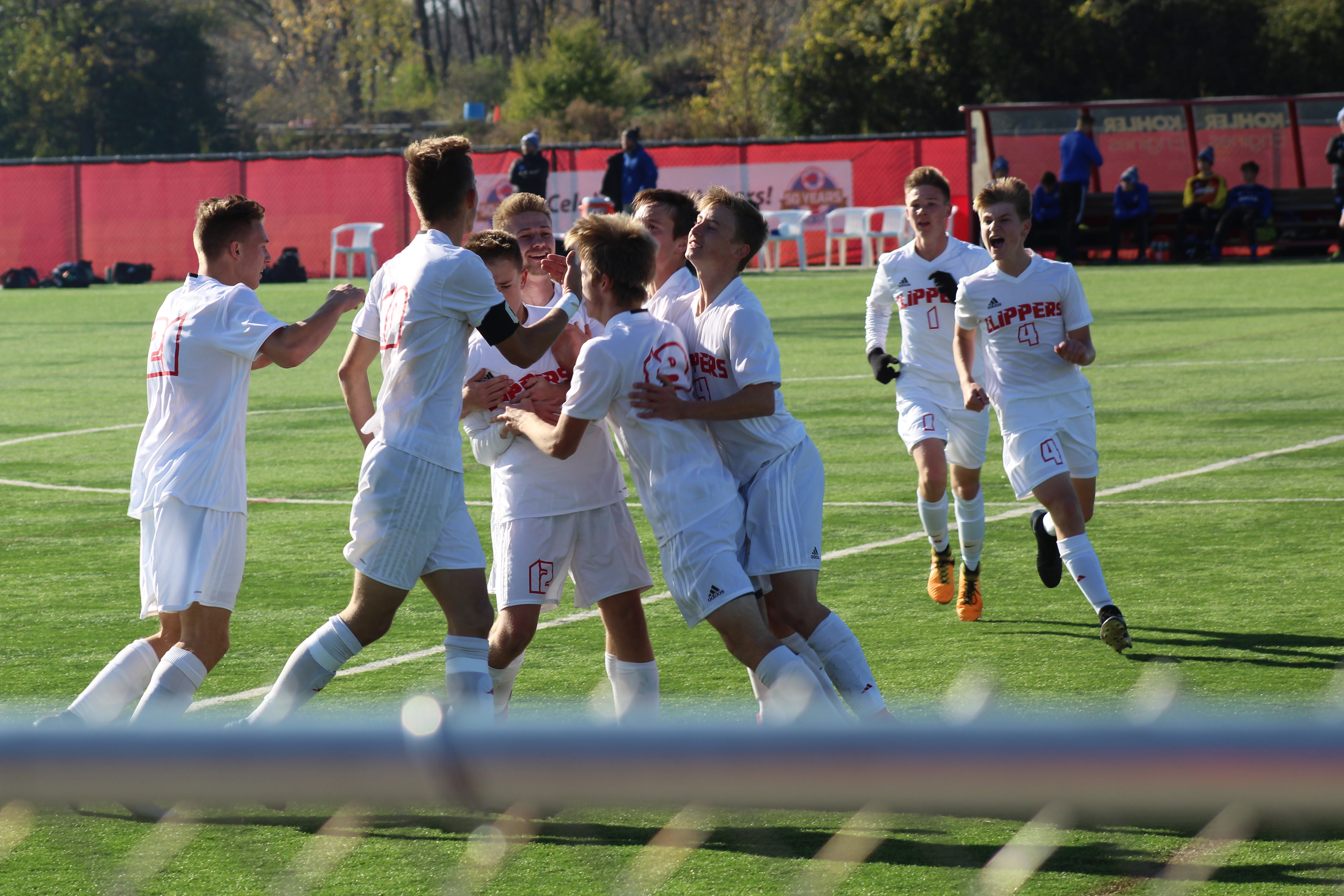 Celebrations like this one after a goal in the 2017 state sectionals have been the norm for Sturgeon Bay soccer players since Todd Maas took over the program in 2009. The team has made it to state seven of the last 10 years. Photo by Mikayla Eliyha.

“It was one of our proudest seasons as a coaching staff to see how far we came from the beginning of the season,” Maas said. “Racking your brain to figure things out, finding ways to get this group of young men to play at a high level. They deserved to be one of the four teams to represent D4 down in Milwaukee.”

Maas said his initial goal for the program was to win Packerland Conference championships. Having succeeded at that, the Clippers elevated their aspirations.

“We had a ball cleared off the line right before going into the goal and we beat the keeper off a header and a defender saves it from going in,” Maas said of the tough loss to University School in 2013. “[The 2014 game] was just a mess, we went into that game without both of our starting forwards due to injury.  It was hard for us even to get momentum going forward.”

Sturgeon Bay finally broke through in 2015 with a 1-0 win over Barron in the Division 4 state semifinals on Jaden Stevenson’s goal in the 70th minute. In the final against University School Robbie Hohlfelder and Alessandro Nora scored and goalkeeper Trent Maas posted a shutout to help the Clippers avenge the tough semifinal loss in 2013.

“Winning a state championship is unlike any feeling I’ve ever had,” said Stevenson, who just completed his first soccer season at Northern Illinois University. “The feeling that all the hard work, sacrifices, and adversity that the team had gone through paid off in the end was amazing. It’s an experience that I will never forget, and one that I hope the community won’t either.”

After missing the state tournament in 2016, Sturgeon Bay returned in 2017, losing to The Prairie School in the final, 1-0.

It should come as no surprise that a state tournament appearance is the top goal for the Clippers each season. Maas said while the Clippers had established some success when he took over in 2009, he knew his coaching staff had to evolve to move the program forward.

“I personally challenge myself to be a better coach each and every day and come up with new drills to get the boys moving and make them think,” Maas said. “There are a lot of sleepless nights during the season.  Either watching game film and breaking things down, or finding new material to help us get better.”

Stevenson said Maas has earned respect within the program because he is a players coach. His treatment of all the players on his roster – from top to bottom – has allowed him to push his players to succeed where other coaches may not.

“In my four years of playing for coach Maas, I never came across a player that wasn’t ready to run through a brick wall for him,” Stevenson said. “Overall, the love for the game that he shares with his players and the unique ability to bring out the full potential of his teams year after year has led him, along with the rest of the coaching staff, to be the standard for all coaching staffs in high school soccer in Wisconsin.”