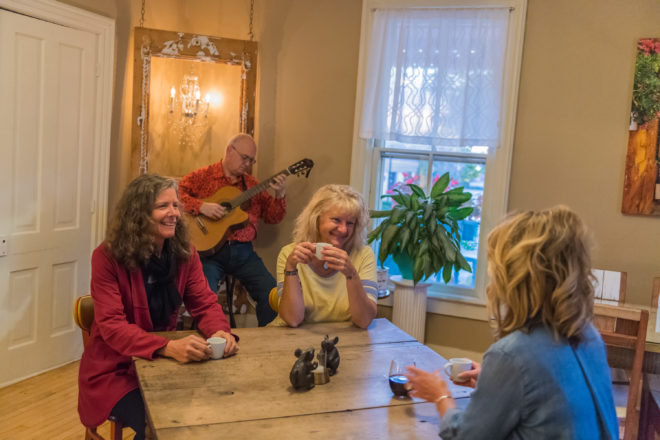 If you live in Sturgeon Bay, you probably know about 5th and Jefferson Coffee House, owned and operated by Shawna Young, with the help of her husband Fred. It is the cute, unassuming house on (where else?) 5th Avenue and Jefferson Street that, on entering, opens up into an assortment of cool rooms and quirky wall decorations.

But there is an open secret about this setting that only a select number of regulars know. On Tuesday nights, from 6 to 8 pm, the coffee house transforms into a space for live music called Original Jazz Night, with drinks and yummy food to boot.

Fred Young had kicked around the idea for a while before it became a tradition. The coffee shop had hosted musical performances before on various nights (Fred is a slide guitarist himself), but it was hard to predict the attendance for any given night, and he was forced to reconsider the format.

“There wasn’t enough traffic to justify the time and energy we were putting into it,” Fred said. 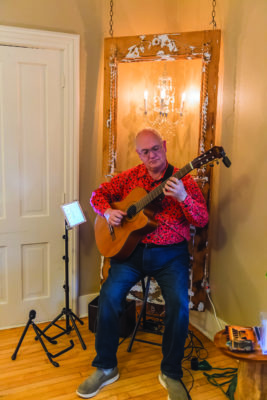 While visiting family in Wichita, Fred saw that a local coffee shop was planning programming for Valentine’s Day. Fred thought that 5th and Jefferson might do the same. From that Feb. 14 on, the coffee house has hosted Original Jazz Night on Tuesday nights, featuring jazz musicians performing only original music. “Jazz is a good fit for this place…all day long,” Fred said with a chuckle as soft jazz played on the coffee shop speakers.

Anyone who walks into 5th and Jefferson can see Fred’s point. The ambience of the whole space is effortless and one always has the option to either hide away with a book in a smaller room or socialize on comfy couches with other patrons. For the jazz nights during the summer months, Fred created a makeshift stage for the performers outside while customers relaxed and lounged under the stars. Now that it’s getting cooler, the music is performed in one of the smaller rooms in the middle of the coffee shop, where customers can eat and drink in the larger, surrounding spaces.

Unlike most coffee shops, 5th and Jefferson has a beer and wine license, so adult beverages are served at Original Jazz Night, along with a special small plate menu that includes favorites like crab cakes. They are currently switching each week between performances from the musician George Sawyn and Coyote Ghost, a Latin jazz band. But Fred, wanting to branch out somewhat, is in the process of approaching some singer-songwriters in the area to perform as well.

Though the weekly nighttime events don’t always fill the coffee shop to the brim, 5th and Jefferson has developed its group of consistent regulars that come most Tuesdays to enjoy the music, food, and drinks.

“I hate to use the Cheers! thing, where everyone knows everyone, but it is kind of like that in a certain aspect. It’s nice,” Fred said.

Hosting a huge audience for these jazz nights was never the point for Fred anyway. Before starting these weekly events, Fred had an important conversation with Chris Cote, owner of Mr. Helsinki Restaurant and Wine Bar in Fish Creek, who occasionally hosts music at his restaurant. Chris said to Fred, “I look at it from the side of, I wanna hear them perform so I’m just gonna pay them to perform, and if we make any money it’s a bonus.” Fred added to that sentiment, “Some nights I thought, you know what? We didn’t have good attendance, but we sure had good music.”

If you’re in Sturgeon Bay on a Tuesday night, do yourself a favor and check out Original Jazz Night at 5th and Jefferson Coffee House between 6-8 pm. Whether you’re there or not, there’s no doubt they’ll be enjoying some good music.

For updates on 5th and Jefferson and their Original Jazz Night, find them on Facebook.