The continuing rift between the old guard and new guard in Sturgeon Bay government was made even more apparent at the Jan. 5 Common Council meeting when freshman District 1 Alderwoman Kelly Catarozoli said to District 5 Alderman Jerry Stults, “I see my job as an elected official and you seem like a lobbyist for manufacturing.”

The occasion was the council’s consideration of closing portions of Jefferson Street and 1st Avenue to accommodate Bay Shipbuilding’s proposed purchase of the vacant Palmer Johnson buildings and expansion of their business. 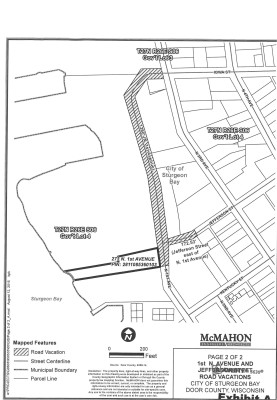 Stults had said for him it was a clear-cut decision to support Bay Shipbuilding’s expansion plans, which the company says will bring at least 50 to 75 more jobs to the city. He explained that his four children don’t live here because of a lack of opportunities.

“I don’t want that to happen to the next generation,” Stults said. “I’ll work my butt off to see there are jobs here.”

Catarozoli wondered aloud if the jobs were enough of a benefit to justify the negative impact of closing the streets.

“I don’t think Door County in general should be seeking a ton of industry because we have so much natural beauty. We’re a very different location,” she said.

“I can’t go back to my constituents and say we really fought hard for you to get something that can offset the negative impact many of those residents have had for years on their health, the dust, the pollution, whatever that they put up with,” she said. “But now to extend that even further, and the negative impact, I need to give them something and I can’t. There’s nothing in here for them to feel good about.”

Mayor Thad Birmingham and City Administrator Josh Van Lieshout explained that the city negotiated 11 conditions that have to be met by Bay Shipbuilding in order for the street vacation to happen. The conditions include payment to the city of $135,000 to offset the cost of projects to close the portions of the two streets, dedication of land for two turnarounds, rededication of the streets to the city should parent company Fincantieri Marine Group sell more than 50 percent of land west of 3rd Avenue, build employee parking and landscaping, good faith efforts to contain dust and not starting the street vacation until after the Wisconsin Department of Transportation roundabout projects are completed in the city in July.

Catarozoli said the conditions don’t seem to benefit the city in any way.

“I’m really trying hard to find benefits for the residents of Sturgeon Bay, but I can’t find one,” she said, adding that she sees “a positive for a foreign company and a negative impact for the people of Sturgeon Bay.”

Birmingham pointed out that hundreds of people “work for that foreign company” and that when a company wants to grow and create more jobs, “everybody benefits.”

“I know you don’t agree with that, and you’re perfectly welcome to your opinion, but this will affect, in my opinion, everybody in this city, and it will affect them positively, not negatively,” Birmingham said.

“The numbers don’t show it,” Catarozoli said, pointing out that a 2004 shipyard master plan and $9 million in grants to Palmer Johnson and Bay Shipbuilding were supposed to grow the economy.

“It didn’t work, so why would I think this would work?” she said.

Birmingham said every time the city takes an action, there is risk involved. “You have to look at the potential gain against the potential risks,” he said, adding, “We don’t want to let the fear of failure paralyze us from doing anything. These jobs are very important. They’re very important to our community. This company is very important to our community. We talk about a working waterfront and supporting that. You’re not going to find a better way to show that than to help this company out….They want to take our working waterfront, which has shrunk, and build it back up. That’s what they’re looking to do, and they’re looking to do it with good-paying jobs. Is there some risk to the city, yeah, but I think we’ve done a very good job of mitigating that.”

“Let’s have numbers, Bill,” she said.

“Kelly, I really appreciate your comments, and I have to please ask you not to refer to the shipbuilding cluster plan as a failure,” Chaudoir said. “It was definitely anything but a failure. This city received $8 million to sustain and grow our shipbuilding industry. And it has done that.”

But, he added, the Great Recession stunted the growth that was expected.

“It was a huge success for Sturgeon Bay. Have we grown to the extent we wanted? No. You can attribute that to the recession, like every other community in the world,” Chaudoir said.

Ultimately, the street vacation plan with the 11 conditions passed on a 5-1-1 vote, with Catarozoli voting against it and Alderman Stewart Fett, a Bay Shipbuilding employee, recusing himself from the vote.