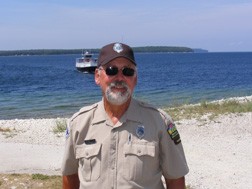 (With apologies to Bob Seger)

Grew up on the St. Croix River,
Bought his boats two feet at a time.
With an industrial maintenance background,
He works well in soil or grime.
He loves this Rock.

He’s tried hard to make improvements.
Park “feels” like 25 years ago.
His oversight of 7,000 volunteer hours,
Lake Michigan’s lighthouse a gem you know.
He loves this Rock.

He says, “Now we’ve been discovered,”
With 42 campsites nearly full and nice.
It’s a year round destination.
In winter visitors walk over on the ice.
He loves this Rock.

If there’s a concern about the Island,
Contact Randy day or night.
He’ll have an answer to your question,
Before tomorrow’s first sunlight.
He loves this Rock.

Now we sit looking back at Washington,
Reflecting on the future of this treasure.
He smiles, says, “I do it cause I care.”
It’ll bring future generations pleasure.
He loves this Rock.