When the lake’s chub population dropped, the ecosystem wasn’t the only thing to take a hit. 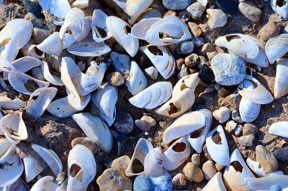 “It was our best seller for 70 years, so it’s definitely affected our business,” said Chris Voight of Charlie’s Smokehouse in Gills Rock.

Every day, sometimes every hour, customers walk into Charlie’s Smokehouse asking for smoked chubs. For the past 11 years, they’ve usually left empty handed.

“Even the ones we’ve been able to get, they’ve been skinny,” Voight said. “You can see the ribs through the side of the fish – they’re starving to death.”

Although it’s hard for scientists to tell what’s going on with a declining chubs population, invasive species may play a role by disrupting the food chain or preying on the fish.

Invasive species – like zebra and quagga mussels, sea lamprey and phragmites – aren’t originally from the region but were introduced by accident or on purpose, usually through tourism or trade. They often don’t have any natural predators and compete with native species for food and space.

Wisconsin spent $12 million dealing with aquatic invasive species (AIS) in two years, 2009 and 2010, according to the report The Costs of Aquatic Invasive Species to Great Lakes States done by the Anderson Economic Group. The money was spent on AIS control, research, prevention and education.

Even with state help, many businesses are spending big to deal with invasive species. The study lists five affected industries, including sport and commercial fishing, power generation, shipping, tourism and recreation, water treatment and additional costs to households.

Communities on the shore of Green Bay and Lake Michigan often have to deal with results of invasive mussel infestations beyond mussel-covered beaches, such as clear water and more algae.

“The lakes are becoming clearer, there’s no doubt about that,” said Scott Hansen, fisheries biologist for the Department of Natural Resources. “The nutrients are being drawn out of the lake and into certain organisms like mussels.” 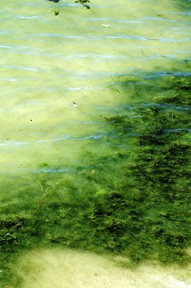 More algae grows when extra light can get through clear water. Photo by Len Villano.

When the water’s clear, more light can reach algae and cause it to grow. But mussels don’t stop there – they also make more nutrients available to algae as they eat and excrete phytoplankton.

Those big clumps of algae eventually reach the beach and stink once they start to break down.

“People along the shoreline don’t want to walk out of their house and have it smell like a sewer,” said Charity Buhr, Ephraim village administrator.

To clean up the gunk, Village of Ephraim employees scrape the beach with a tractor – which adds up to about $60 per week for labor costs this year. In past years with more algae blooms, costs have been even higher.

“It’s usually a couple of hours a week where we obviously could be doing other things,” Buhr said.

Mussels’ influence reaches farther than just algae. They compete for food with small fish and can cause their populations to decline. When those small fish start to disappear, there’s less for larger game fish to eat.

When the food supply is down, so is fish size. Tim Tuckenberg of Reel Addiction Charters said he’s caught a healthy number of fish this season, but the size of them has dropped. He used to regularly reel in 20-pounders, but lately the fish have only hit 15 to 18 pounds.

“The states are going to stock less of them in the future [because of a declining food source], so that may affect our business,” Tuckenberg said. “People aren’t going to want to pay $300 to $500 for a charter to catch two or three fish.”

The economic cost inflicted on municipalities, businesses and homeowners in the Great Lakes is shared, and with shared cost is shared responsibility to keep invasive species from entering or dominating the ecosystem.

That’s why keeping the Ephraim shoreline looking and smelling good takes more than just cleaning the public beach. The village’s permit to clean the beaches extends from the Firehouse Marina to Crystal Springs Road, and individual shore owners have to help keep the shore clean.

That’s one thing about invasive species – they spread.

“We’ve noticed a serious improvement, but in order to make that improvement everyone has had to do their part and clean their properties,” Buhr said. “If or when people stop thinking it’s important it’s going to come back.”