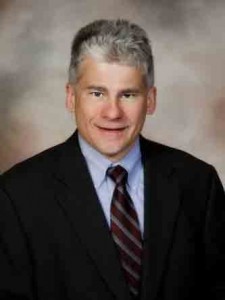 Door County Corporation Counsel Grant Thomas will serve as the interim county administrator until the county board hires someone for the position.

Corporation Counsel Grant Thomas will handle the reins of official county business with the Nov. 3 departure of County Administrator Maureen Murphy. Thomas was officially named the interim administrator, with no extra compensation, at the Oct. 28 meeting of the Door County Board of Supervisors.

Thomas had previously served in that position for eight months in 2012, between the time former administrator Michael Serpe was terminated in March 2012 and when Murphy took up the reins in October 2012.

The board held a brief discussion on how to proceed with hiring a new top official for the county. The three options available include returning to the appointed administrative coordinator position the county had until 2000 (this position holds the least authority); the appointed administrator, who wields more power than a coordinator but can still be trumped by the board; and the elected position of county executive, a position that holds veto power over the county board.

Supervisor John Neinas was first to speak, saying the county is “zero for two with the administrator. Hopefully, we could learn from past experience,” he said, adding the quotation that only a fool does things the same way expecting different results.

Supervisor Susan Kohout spoke up for the county administrator route.

Supervisor Leo Zipperer, who had earlier suggested that a special night meeting of the board be called to discuss how to proceed, said he had heard from one constituent who favored an elected county executive.

Supervisor John Bur said he would support an elected position.

County Board Chairman Dan Austad voiced his support for the administrator position, saying the coordinator doesn’t work and the board would give up too much power with an elected official.

Supervisor Richard Virlee pointed out to his fellow supervisors that while he is not necessarily advocating a coordinator, “I just wanted to make the statement that you do have more authority if you go with a coordinator.”

“If we get someone that can manage the store and do a good job, it would remove from the county board the micromanaging we tend to get involved in,” Zipperer said. He added that a lot of thought went into creating the administrator position.

“It was a pretty big change and we made that change,” he said. “Unfortunately, we had occurrences with the two last administrators. Those are to be expected.”

Zipperer added there is no need to rush the process. “We can spend a couple months doing it so any and all questions might be asked,” he said.

Supervisor Joel Gunnlaugsson said he is in favor of the administrator position, and suggested that since the full board of 21 supervisors does the hiring and firing of a county administrator, the full board should be in on the process, rather than delegating it to the seven-member Administrative Committee. “If this body is in charge of hiring and firing, then this body should sit in a room to ask questions,” he said.

Austad, who also chairs the Administrative Committee, said that will be taken into consideration by the committee when it next meets in November. He said the committee will also be looking at creating a definitive evaluation process for the next administrator, something, he said, “we haven’t done a good job at.”

The board voted 17–3 to reaffirm the original resolution of Dec. 21, 1999, creating the office of county administrator. Voting against it were John Bur, John Neinas and Richard Virlee.

The board will next meet on Wednesday, Nov. 12, for a budget hearing.