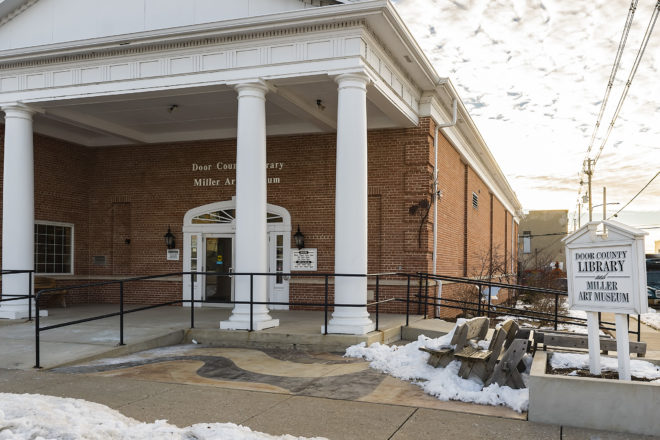 “Collaboration is essential to the sustainability and future growth of museums and libraries and can increase the ability of institutions to address 21st-century challenges and opportunities and meet community needs.”

This quote, obtained from a report titled The Future of Museums and Libraries: A Discussion Guide published by the IMLS (Institute of Museum and Library Services), 2009, reinforces the importance – and relevance today – of the unique partnership that developed between the Door County Library and Miller Art Museum since joining forces back in the early 1970s. For those unfamiliar, the IMLS is the primary source of federal support for our nation’s 122,000 libraries and 17,500 museums; it serves to create strong libraries and museums that connect people to information and ideas.

A bit of historical context: Public library service officially began on the peninsula in 1901. The City of Sturgeon Bay assumed responsibility for the library in 1906, which was founded as the Sturgeon Bay Library Association by a group of 10 men in 1866. Eventually a site – located at the corner of Fourth Ave. and Michigan St. – was donated to provide permanent housing for the library collection with a grant from the Carnegie Foundation.

This library was used over the years and in the late 1940s, a new idea for regional library service was attempted as a project between Door and Kewaunee Counties and the State of Wisconsin. All of the Door and Kewaunee libraries contributed their materials and administration to the Door-Kewaunee Regional Library, but this project was terminated in 1952. Kewaunee County pulled out of the project and Door County joined together into a single system with a bookmobile. The public libraries of Door County have since operated within a single system administered by the county.

In 1972, plans for a new library, to replace the former Carnegie building, were started. The fundraising campaign for the new facility was successful and varied in its sources. In addition to many private and corporate contributions, there was support from the Friends of Door County Libraries, the City of Sturgeon Bay and the County of Door.

So, how does the Miller Art Museum fit into this?

Among the varied pillars of financial support for the new facility was a substantial gift from the sale of a building donated by Gerhard CF Miller, the Miller Art Museum founder, located at 147 N. Third Ave.; many of you today might recognize it as Door County Traders Antique Mall.

In the Oct. 24, 1974, issue of the Door County Advocate, an article titled “Library art wing bargain for shoestring budget” articulated the importance of access to original art in a public setting and how the proposed art wing would operate under the guidance of an art committee and a large group of enthusiastic volunteers. Miller’s belief that the arts must be available to everyone, his love of travel, and incredible network of businessmen led to the reality that we now know as the Miller Art Museum.

Gerhard, who traveled the world extensively with his wife Ruth, recognized the distinct difference between galleries in Italy that were open to the public year-round and the seasonality of galleries in Door County. He saw a window of opportunity for a facility that could provide year-round availability of cultural offerings including visual art, music and written word, to students, residents and visitors alike.

If ever there was a man to help a community bring its creative spirit to fruition, it was Gerhard.

A great deal of time, thought and energy was devoted to the development of the Museum; Gerhard’s impact on the institution as we know it, both physically within the walls of the museum, as well as the exterior of the building as it pertains to its traditional colonial architecture, was immense.

So, how, then did the museum operate in its early years and develop into what it is today?

The Miller Art Museum was a great gift to you – our community – and was a progressive idea for the time. In 2019, it is still a solid, successful model that organizations across the nation seek to develop. We are, without question, a unique institution.

In an era where there exists so much uncertainty surrounding the traditional funding model for libraries and museums, I find great inspiration and excitement in the partnership that has evolved and grown over the course of 44 years.

As stewards of our Door County culture and heritage, and as places of learning and exploration, the Door County Library and Miller Art Museum, together, have much to offer and a successful, collaborative platform with which to build.