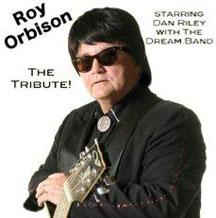 Singer, comic, and multi-instrument maestro Dan Riley brings limitless laughs (and talent) to the stage at every turn, and his latest production is no exception. Tickets are now on sale for Riley’s performance in Roy Orbison: The Tribute! on Saturday, February 27 at 7:30 pm at the Southern Door Community Auditorium (SDCA).

Well known throughout the entertainment world, Riley has performed with the likes of Rodney Dangerfield, Bill Cosby, and Frank Sinatra. His most recent production, I’m a Boomer Baby!, came to the SDCA and brought rave reviews.

This four-star-rated show follows the theme of Roy Orbison’s Black and White concert with 20 song selections spanning his career from the ‘50s through his last albums released in ‘92. This show is fronted by a singer that not only looks like Roy but more importantly he sounds like Roy.

The Dream Band, featuring seven national touring musicians take the stage with Riley playing the correct instruments through period correct amplification. This show will be as close to hearing these great works “originally” as you can get.