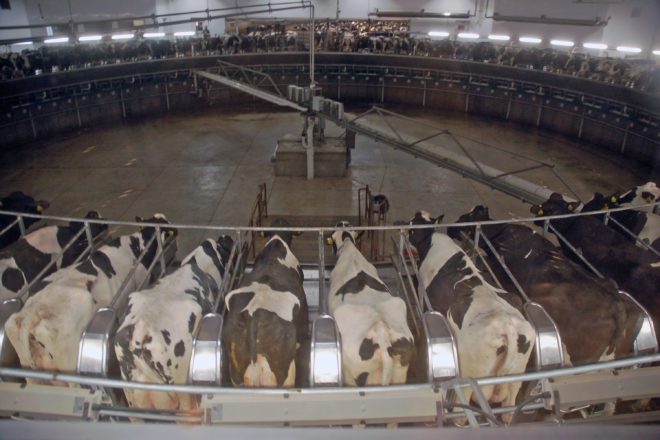 The rotary milker at Kinnard Farms. Photos by Jim Lundstrom.

Cow manure – the great dilemma of our time and place – was running deep figuratively in Kewaunee County on Nov. 28 when a single public hearing was held on permits for five different large dairy farms known as CAFOs (concentrated animal feeding operations, for those who haven’t been paying attention). 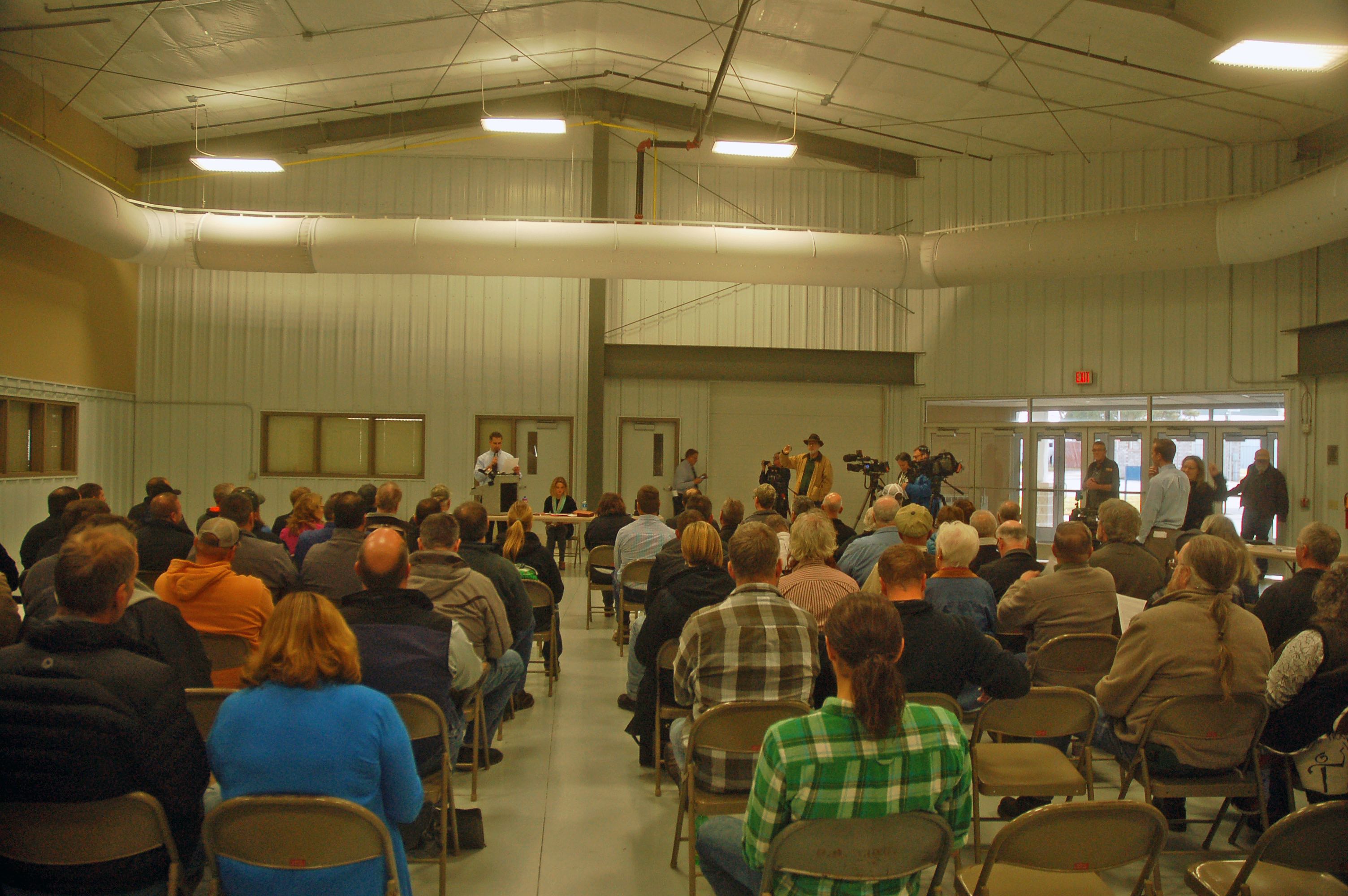 A little more than 100 people showed up for the five CAFO public hearing permits held in Luxemburg on Nov. 28. Twenty-two people aired their views on the permits, with the majority speaking against herd expansions.

Twenty-two people took advantage of the opportunity to speak for up to five minutes each regarding the permits, and if a main theme had to be chosen from the many scenarios presented, the overwhelming majority of speakers developed the theme that there is already too much manure for our fragile landscape, as evidenced by tainted wells and impaired surface waters.

“This agricultural model is unsustainable and we all know it,” was a common theme, but was stated specifically by Paul Leline, representing the Door County Environmental Council.

“I don’t want my butter and cheese taken away from me, but I strongly, strongly believe you should deny any CAFO expansion,” said Joe Mills of Kewaunee.

Several others spoke against the unprecedented process of holding one public hearing for five very separate permits. A few commentators invoked the word “greed” as the driving force behind the expansions.

Many speakers pointed out that holding one hearing for five different CAFO permits is a perfect example of how the DNR has been weakened by adopting “business friendly” practices advocated by the Walker administration.

A number of speakers also referenced the tragedy of the anger the issue has generated in the county.

In addition to fear of additional water contamination by expanded herds, Kewaunee County Supervisor Mary Ellen Dobbins related stories from constituents about the negative effects of living near CAFOs, which includes speeding ag trucks on their roads, and how those problems will only be exacerbated by the proposed herd expansions.

Ultimately, she said, she understands how important agriculture is to the local economy, but felt further expansion was not necessary.

Dobbins was one of four Kewaunee County supervisors to speak at the meeting. They included Gerald Paape, Lee Luft and John Pagel, who owns Pagel’s Ponderosa Dairy, the largest family owned dairy in the state.

Paape, who is also the town chair in Ahnapee, said, “Our town roads, the land, the water supply can’t sustain more volume until we have a solution we can all work with. We all know we need the farmers but we have to work together.”

While a number of farmers were in attendance, few spoke at the hearing because they held a well-attended press conference an hour and 45 minutes before the DNR hearing at Kinnard Farms in Casco, where Lee Kinnard, agronomist Nathen Nysse and Don Niles of Dairy Dreams, who is also a veterinarian and president of Peninsula Pride Farms, the farmer-led initiative looking into best agricultural practices, espoused the same values as those who spoke against the CAFOs later at the hearing.

Kinnard started off by saying he and the other farmers are united by a common goal of farming sustainably, putting people to work, and protecting the environment. He has been particularly concerned about the “brain drain” from farms. 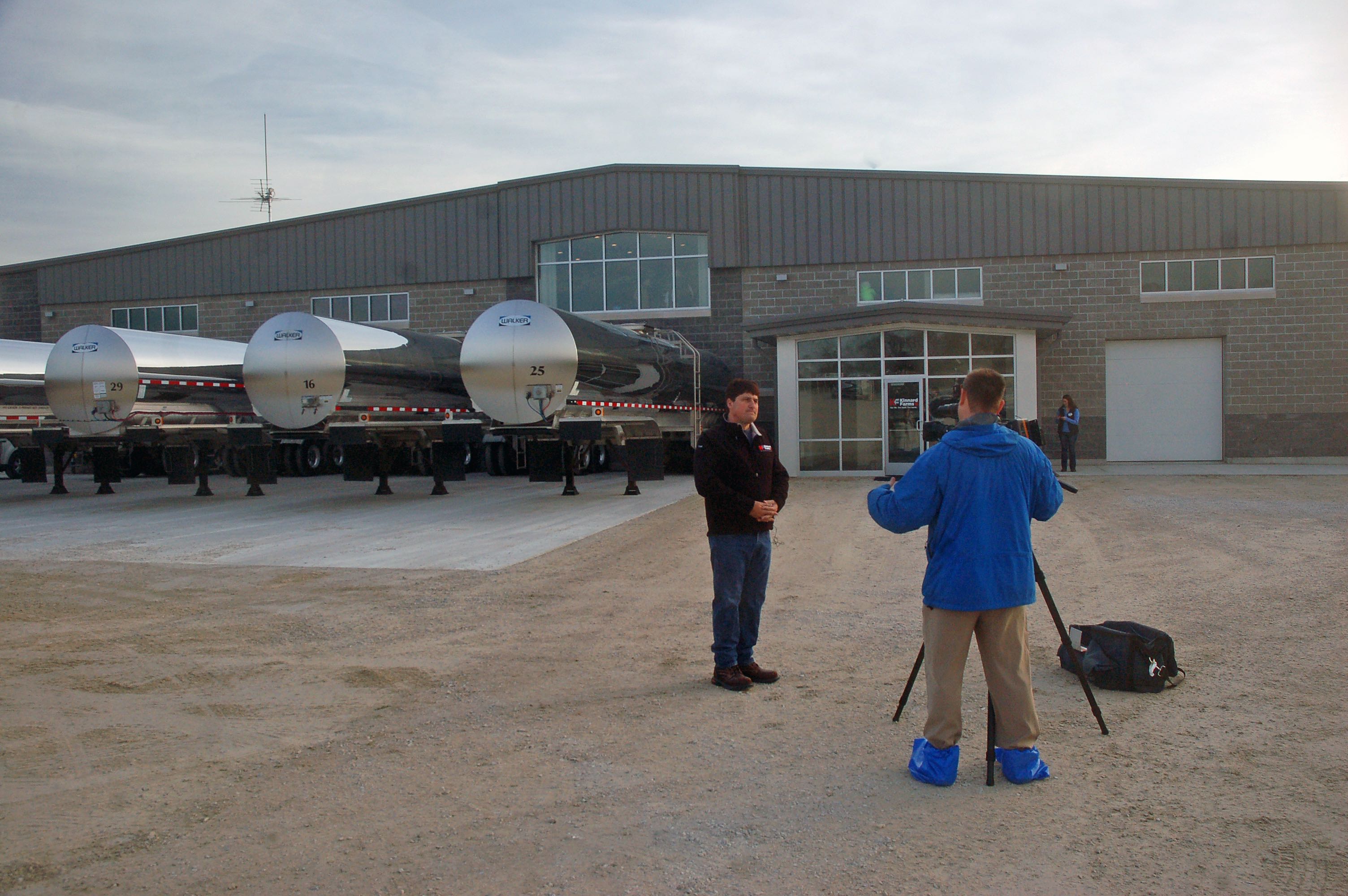 Lee Kinnard of Kinnard Farms in Casco is interviewed for a television news report after a news conference was held at the farm Nov. 28, before the CAFO hearings in Luxemburg.

“The next generation didn’t really want to partake in a career that offered lots of days of work, a lot of times 365 days a year and no guaranteed income,” Kinnard said, but adding that “science and technology have revolutionized the way we farm,” which has a way to attract “the best and brightest” back to agriculture.

Kinnard, a fifth generation farmer, said sustainability is a way of life for farmers, “but we probably didn’t have a term for it until recently.”

“We have some very progressive farmers in the area,” he said, who are sharing their successes with a series of small changes that will prevent soil erosion and strengthen conservation. He pointed to Peninsula Pride Farms leading the charge in advocating cover crops to prevent erosion and strengthen soil health.

Niles spoke of the advances Peninsula Pride Farms has made in the two years it has been in existence, which he added was started because “as major land users, we have a responsibility to protect the groundwater.”

He said since formation of the group, 50 percent of all acres and cows and half the milk produced in Kewaunee and southern Door counties are owned by members of the organization. Their mission, he said, is continuous improvement.

“We’re not just looking for a couple of elite farmers,” Niles said. “We’re looking for farmers who can ask themselves the question every day, am I doing things better than I did in the past? And looking ahead, how can I do things better in the next year?”

Asked why the farmers decided to hold a pre-hearing press conference, Niles said farmers don’t typically know how to deal with the media and from past experience know they will be hammered by speakers at the DNR hearing, while TV cameras pan the audience of silent farmers. This way, he said, they could show they share the concerns of their detractors and perhaps a more balanced report would result.