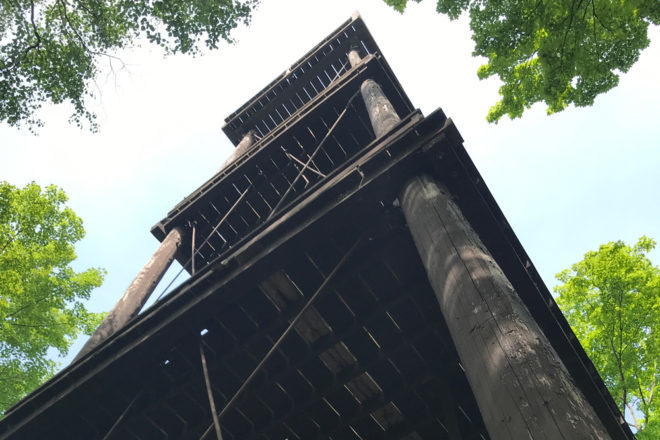 SBHSF calls for public support, and a meeting keeps hopes up

One went to Christie Weber, president of the Sturgeon Bay Historical Society Foundation (SBHSF). The other went to both state Rep. Joel Kitchens (R-Sturgeon Bay) and state Sen. Robert Cowles (R-Green Bay). The letters said essentially the same thing: The DNR is committed to demolishing the historic, 75-foot Potawatomi tower because it needs to be repaired; those repairs would trigger federal Americans with Disabilities Act (ADA) requirements; and the DNR could not make the tower handicapped accessible.

Yet the letters also said the DNR would continue to work with the SBHSF as the organization sought to gain historic status on the state and federal registers – for a tower the DNR intended to demolish.

“It seems pretty clear they’re going to tear it down,” Kitchens said. “But they’ll help pursue historic designation. So what’s that about?”

Cole also invited the SBHSF to a meeting with his staff the week of Aug. 17 at the tower site and extended an invitation to Kitchens and Cowles to attend as well. Kitchens said he planned to be there.

“We’re going to push it,” he said. “I’m not ready to give up on this. I think they’re really wrong on this.”

The SBHSF filed the nomination last month to get the tower listed on the National Register of Historic Places. Also last month, Kitchens and Cowles wrote to Cole to advocate for repairing the tower rather than demolishing it. The Wisconsin legislators argued that the repair would not trigger ADA requirements according to legislative legal advice they had obtained. Further, “a fully accessible tower will exist a short distance away when the new Eagle Tower is completed at Peninsula State Park,” the two co-wrote. Finally on the ADA argument, Kitchens and Cowles suggested the DNR do what’s been done in the case of historic lighthouses: install a video camera at the bottom of the tower that allows people at the bottom to experience the view from the top.

Kitchens said he doesn’t understand the decisions that are being made and suspects there’s a “bureaucratic mindset” at play regarding the DNR’s insistence that it must make the tower either accessible to all or accessible to none.

“If I need to set up a meeting with Preston Cole, I will,” he said. “I don’t know how involved he was with that decision.”

Meanwhile, the tower landed on the agenda of the Door County Legislative Committee’s Aug. 13 meeting, after the deadline of this issue of the Peninsula Pulse, to consider a statement on the tower.

County Board Supervisor Bob Bultman, who chairs the committee, said he had the topic added to the agenda to support the repair of the tower as Kitchens and Cowles requested.

“It’s beyond ridiculous why we keep talking about tearing it down when we’ve already destroyed one,” Bultman said.

The DNR demolished Eagle Tower in Peninsula State Park in 2016 and is constructing, with fundraising assistance from the Friends of Peninsula State Park, a handicapped-accessible tower that will cost close to $3 million. That’s the template Cole indicates the DNR is imposing on the tower at Potawatomi State Park.

“We have set precedence with the Eagle Tower at Peninsula State Park both for accessible outdoor recreation and our ability to work together in public/private partnerships to create an outstanding opportunity for generations of park visitors, of all abilities, to enjoy unparalleled views of Door County,” Coles wrote in the letter to Kitchens and Cowles.

Weber said there’s no reason to follow the Eagle Tower template when that structure had not been listed on the national register.

“So no precedence would be created between the two, unless it is now the desire of the state to tear down all their historic structures in the state, which I don’t think it is,” she said.

Weber also pointed to Wis. Statute 44.30 as a preventive against demolition in that it requires the state to prioritize the preservation of historic structures.

“So we will take him at his word that the department will follow the process and are not out to tear down historic icons and will change their scope of work accordingly,” Weber said.

The DNR’s scope of work was too broad, Weber said, and did not take into account the structure’s historic significance. The repair, as outlined by the SBHSF’s expert, Dan Tingley of Wood Research & Development, would not alter the site and was based on building codes for historic structures, Weber said.

Weber’s organization has created an online petition so the DNR can hear from members of the public who support the tower repairs.

“We are so thankful for the legislators who are supporting the tower’s preservation and hope that the public and historical societies will all jump in to change the scope of work which protects Door County landmarks when economically feasible, like our Potawatomi tower is,” she said.