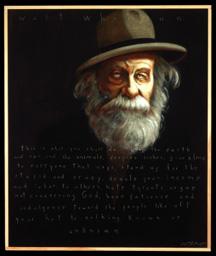 Sometimes tragedy invokes the best in us. After grief and mourning of deeply felt losses, we can take time for introspection and look to hope for the world, remembering the thousands of voices of those who work for environmental, social and political justice for all of humanity.

Such was the case for (then 57-year-old) Maine artist, Rob Shetterly, who immediately after the horror of September 11, 2001 found himself on a rollercoaster ride of emotion. He was anguished as the government turned to a military response, hoping it would instead be a time of re-assessment. Yearning for solace, he returned to his studio and found himself painting a portrait of Walt Whitman, inspired by a quotation he had pinned on his studio wall many years before:

“This is what you shall do: love the earth and sun and the animals, despise riches, give alms to everyone who asks, stand up for the stupid and crazy, devote your income and labor to others, hate tyrants, argue not concerning God, have patience and indulgence toward the people, take off your hat to nothing known or unknown…”

When he completed the 30” x 36” color portrait of Whitman he etched the quotation into the finished work. The first people to see the portrait burst into tears, feeling the same mixture of anguish he felt. Shetterly knew right away that people needed to identify themselves with a community of American truth tellers and was excited to carry on with many, many more.

Leaving the direction of his earlier work, Shetterly earnestly began searching for other figures from American history whose portraits he could paint. He began to realize the central theme to which he was drawn was not only the notion of truth, but how other people struggled to manifest, advocate and uphold the truth as they saw it. The truths that particularly interested Shetterly are those found in the Declaration of Independence and the Constitution of the United States, using democracy in its best sense as a fundamental truth that gives dignity and equal worth to everyone – the kind of truths that are jeopardized when freedoms are usurped by subterfuge, corporatism, injustice and environmental abuses.

Shetterly says, “I hope these figures transcend party affiliation or ideology. I am just trying to find people who stick up for what is right about America. They are political because they aspire to being profoundly true. When art is really good, it can carry a political message and still have a mysterious element. That is what I aspire to do.” 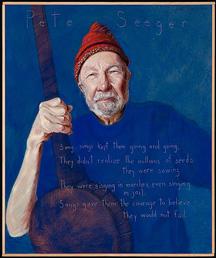 Shetterly’s larger-than-life portraits project from rather stark, solid backgrounds with most of the figures staring straight on at the viewer. Their gazes are at once welcoming and disarming, engaging each viewer in a very personal way, as if in an intense conversation.

I first happened upon Shetterly’s work in HOPE magazine, a publication that unfortunately is no longer in publication but gave me something to cling to immediately following 9/11. In the Nov/Dec 2003 issue was a compelling article by Philip Osgood (from which I have borrowed here) called “Portraits of Courage,” and after reading this, the Miller Art Museum began to take the steps to investigate the possibility of bringing both the artist and his portraits to Door County. 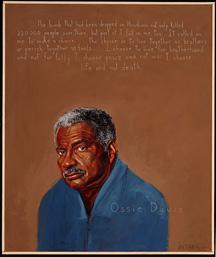 In March of 2005 the museum invited Rob Shetterly to exhibit 40 of his portraits. Visitors were spellbound by the powerful display of notable Americans, such as, Robert F. Kennedy, Dr. Martin Luther King, President Dwight D. Eisenhower, Rachel Carson, John Muir, and William Sloane Coffin, to name a few. The goal of the museum was to promote community dialogue and personal reflection with the exhibit as the stimulus.

The Miller Art Museum encourages anyone interested in Rob Shetterly’s project to visit the exhibit, to attend the related events, as well as to view his Web site, http://www.americanswhotellthetruth.org, which includes his personal journal, images of all the portraits, a fuller biography of each person/portrait, and access to related curriculum for the classroom. 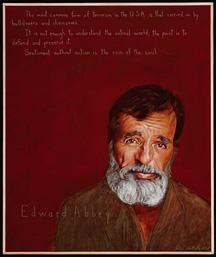 The Miller Art Museum is located within the Door County Library at 107 S. 4th Avenue, Sturgeon Bay. Admission is free; the museum is fully accessible. Hours are Monday 10 am – 8 pm; Tuesday through Saturday 10 am – 5 pm; closed Sunday and holidays. For more information call the museum office at 920.746.0707, email [email protected] or consult http://www.millerartmuseum.org