The state limited the allowable operational tax levy increase for 2012 to the increase in the value of net new construction, which for Door County was just 0.72 percent, or $165,604, creating a base levy capacity of $23,166,147. Both the Emergency Services and the bridges budgets are exempt from the state levy limit. When those are added the total tax levy comes to $24,807,971, an increase of 0.80 percent over the 2011 levy. 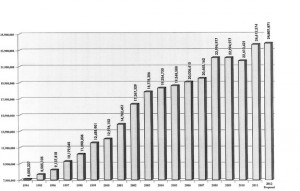 Serpe said that with the levy caps in place the county’s only option to maintain services was to cut personnel costs. By reducing hours the county will be able to avoid layoffs. Serpe instructed each department to examine hours that could be reduced and to evaluate responsibilities on a position-by-position basis. He said residents should see little effect.

“We’ve done this by looking at what we could cut without having a noticeable effect on delivery of services,” he said. “Most people will not notice anything.”

Clerk of Court Nancy Robillard anticipates cutting 10 – 12 hours of staff time each week, over 500 hours over the course of the year. She is confident that her department will step up – “we have to,” she said – but it won’t be easy.

“I am already short staffed,” Robillard said. “I lost a person two years ago, and now I have to cut more. We’re already the lowest staffed in the district for the number of judges we have, but we’ll do our best to keep people from seeing a blip.”

Community Programs Director Joe Krebsbach said he has yet to determine how his department will grapple with the reductions.

“There will definitely be impacts,” Krebsbach said. “We’ll be trying to do more with less. That’s just how it’s going to be for the next couple of years.”

Krebsbach said the department already has more demand than it can keep up with, with waiting lists for three of the four programs it administers.

“Some people’s needs may go unmet, or they will wait longer for services,” he said. “We already have a six-month wait for AODA counseling and that may stretch longer.”

The Community Programs department is responsible for mental health, Alcohol and Other Drug Abuse (AODA), and developmentally disabled services as well as services for the emotionally stressed. The department currently carries a caseload of nearly 1,200 Door County citizens.

Krebsbach said he is writing grant applications and searching for other ways to fund programs at the current level of services.

Director Rod Dequaine will lose seven to eight hours of work per week in Child Support services. He said the department will shift hours around and people might see delays getting papers filed, but the work will get done.

Like many departments, Dequaine is dealing with more than staff cuts. The state cut funding for Child Support services from $8.5 million to $4.25 million in its new budget. That trickles down to a cut of almost $30,000 for Dequaine in a department with a 2011 budget of about $475,000.

“It’s tough,” Dequaine said, “but you deal with it the best you can, realizing that others have it tough, too.”

Revenue-generating departments like the Clerk of Court are seeing the effects of the sluggish economy as well. Robillard expects to bring in fewer collections as employment for many continues to be difficult to come by.

“We’re still doing everything possible to collect fines and court costs,” she said. “I do everything short of coming to their door and shaking it out of people, but you can’t get blood out of a stone.”

It’s difficult to garnish wages that aren’t being earned, and attempts to intercept tax refunds aren’t as successful of late because refunds have decreased and other needs, such as child support, get first dibs on that money.

Krebsbach said his department is dealing with other funding cuts as well.

“We get our funding from a lot of different sources, and we’re seeing 10 percent cuts in one program, nine percent in another,” he said. “It’s coming in a lot of small cuts.”

The budget has been sent to the county’s oversight committees for review. Those committees will make recommendations to the joint Administration and Finance Committee for review in October. The Board of Supervisors will take it up for consideration Nov. 7.

The County of Door, with approximately 350 employees, is the third largest employer in Door County.