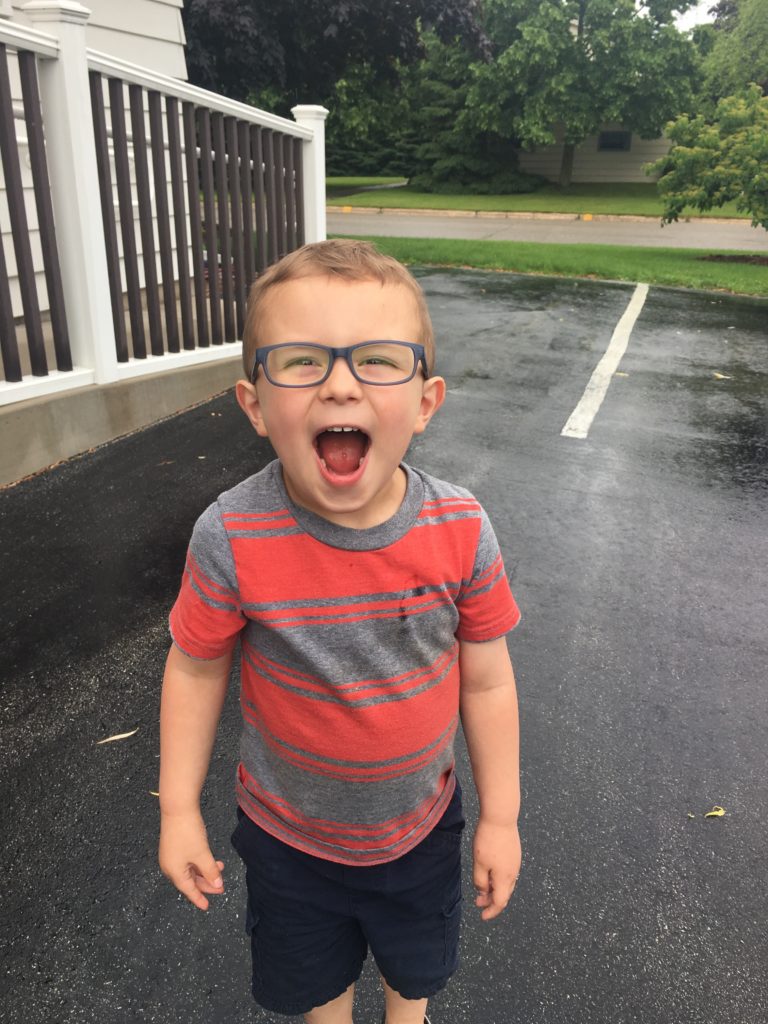 When William Mueller was getting ready for 4K (pre-kindergarten), he participated in the free vision screenings the Door County Health Department provides each year for students. Since 2006, volunteers from the seven Lions Clubs in the county (Brussels, Forestville, Maplewood, Egg Harbor, Sister Bay, Sturgeon Bay and Washington Island) have assisted the health department with the project.

“The Lions Club of Sturgeon Bay provided eye checks to students entering 4K last year. It is because of the early screening, we were prompted to bring my son, William, to an optometrist for further testing. It turned out that he had amblyopia. This means that because one of his eyes was weaker than the other, his brain stopped using the weaker eye. At the time, William was three years old. He gave us no indication of vision issues, likely because he didn’t know it could be better. The optometrist prescribed glasses and an eye patch to be worn for two hours each day to strengthen his weak eye. While he wears his patch, we work on hand-eye coordination with activities such as putting Cheerios on a straw. We recently visited the optometrist for a check-up. The doctor was shocked by the progress. He noted it was ‘better than he could have hoped.’ We will continue to have William wear his eye patch each evening to strengthen that weak eye and continue progressing to an even use of each eye. Without the screening program provided by the Lions Club of Sturgeon Bay, William’s amblyopia could have gone unnoticed for years. While I fully appreciate everything that all of the service clubs of Door County do, The Lions Club’s vision screening program will always stand out in my mind as a program that helped my family. I doubt we would be able to make the amazing progress with William’s vision if his amblyopia had been found at age seven or even later. Dear Lions, thank you for all that you do, but more specifically thank you for helping my sweet William.”

Children who will enter kindergarten in a few months are screened each spring by the Door County Health Department. This is important because some vision problems must be identified before age five to ensure successful treatment. The simple screening test takes less than five minutes. In the past year, volunteers from 120 Lions Clubs in Wisconsin assisted with the screening of nearly 71,000 children in day care and preschool facilities. A little more than 10 percent of them were referred for an exam by an eye care professional. It is especially important to catch problems before the child starts elementary school, where 85 percent of learning is visual.

Preschool screenings are just part of the vision screening services provided by the Door County Health Department. Sara Neu, public health/school aide/coordinator with the department, said students in kindergarten through fifth grade and those in grades 7, 9 and 11 in all schools, including parochial, are screened each fall.

“We could never carry out this program in all the schools without the help of the Lions Club volunteers,” said Neu. “It’s been a great relationship. We especially appreciate the work of Jim Sanden, secretary of the Egg Harbor Lions Club, who takes care of scheduling volunteers, making sure there are Lions at every school to help.”