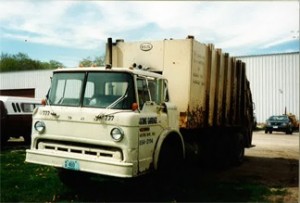 Jeff Johnson’s entire life has been full of garbage, but he doesn’t seem to mind. In fact, picking up other people’s trash has become a passion for the man who rose from trash thrower to owner of his family’s business, Going Garbage and Recycling, which was started by his mother Dorothea on April 1, 1963.

“She used to refer to hauling garbage as her least favorite thing,” said Jeff, “and if she had to hire somebody to haul garbage for her, she might as well do it for everybody else.”

When Dorothea’s brother, John Grasse, struck garbage gold in Alaska after starting his own trash business in the ‘50s, he suggested that Dorothea move back home to Door County from Ohio and get a garbage truck of her own.

“My dad, Percy, was a conveyor engineer on the Great Lakes and he was gone seven to nine months of the year,” said Jeff. “My family was living in a house in Toledo and dad of course was sailing, so we just decided to pack up and move back up to Sister Bay and started the business in what was one of the old Grasse family homes up here.”

So in 1963, while still finding time to take care of four-year-old Jeff as well as his brother John and sister Jill, Dorothea became a business owner, a female business owner in a time when there weren’t many of them.

“Bankers would ask her more questions because they considered her a higher risk for a loan. And going to public meetings in a room of mostly men could create an intimidating scene, but mom rose to the occasion,” said Jeff. “If there were struggles it didn’t show.”

Dorothea’s first client was her mother, Antoinette Grasse, and her second was a restaurant with goats on the roof that you may have heard of. Over the course of 50 years, thanks to the hard work of Dorothea and her employees, the business has steadily gained thousands more customers and survived where a number of its competitors haven’t. 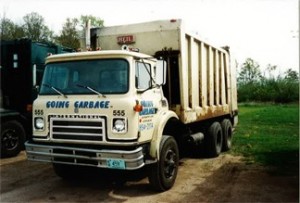 “She had the resiliency to deal with the landfills being closed [in the ‘70s], the economics of high-interest rates, our neighbors who objected to where we wanted to locate the business,” said Jeff. “These are just some of the things she survived.”

Jeff remembers attending business association and local government meetings with his mother as a child, and said he was brought into the family business “mostly for lack of a babysitter.” Before he could drive, Jeff was riding shotgun in a garbage truck, going on trash runs.

But he said that, as a young adult, he was never completely sure he wanted to stay in the family business.

“There was no certainty period,” said Jeff, “but here we are 50 years later.”

While Jeff was in the College of Business at UW-Oshkosh in the ‘80s Dorothea actually put Going up for sale. But the business got no takers, and after graduation Jeff helped his parents decide that it was worth it to keep Going, well, going.

“Oshkosh didn’t teach me how to haul garbage, but it taught me that it might be a good idea to keep the business,” said Jeff.

In the late ‘80s Dorothea was diagnosed with ovarian cancer and suffered a stroke, and Jeff began to transition into taking over day-to-day operations. Jeff’s wife, Christi, also came in to help and continues to help him oversee the business.

“Growing up it was easy to not have to feel responsible for everything when mom and dad were around, but today the buck stops at my desk,” said Jeff. “It’s really the same for all business owners.”

One of the things Jeff has to deal with now that he’s Going’s head honcho is the amount of regulations being placed on the waste industry. He said that Going’s been as much of a shipping business as a garbage business since Door County’s landfills were closed in 1977, with Door County’s garbage now being shipped to Brown and Kewaunee County. 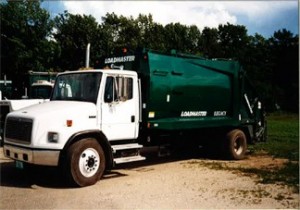 “Back then it was a huge expense, because instead of a four-mile round-trip to the landfill it’s a 75-mile trip one way. The conservation effort required more work, but it’s also a longer term answer to not trying to put waste in the ground,” said Jeff. “Diverting waste from landfills is good, but not all regulations are good. We need to work in the community to make [waste removal] work in an environmentally and economically sustainable way.”

But while he’s looking at the big picture, Jeff still finds the time to hop in a truck when he’s needed, and he still enjoys picking up trash and meeting Door County residents while out on the road.

“My uncle used to say, if you own a dog you’ve gotta love both ends of that dog. And if the garbage business is my dog, I do love both ends of it,” said Jeff. “That’s probably the difference between me and my mom. Garbage was her least favorite thing, whereas I have a passion for hauling garbage.”

Looking forward, Jeff is confident that Going Garbage will continue to survive whatever struggles are thrown its way, thanks to the loyalty of its customers and the dedication of its employees. And he said he’s grateful to everybody who’s helped the business make it to its 50th anniversary.

“Gratitude is probably the one word that sums it up,” said Jeff. “Today I have no regrets, that’s for sure.”