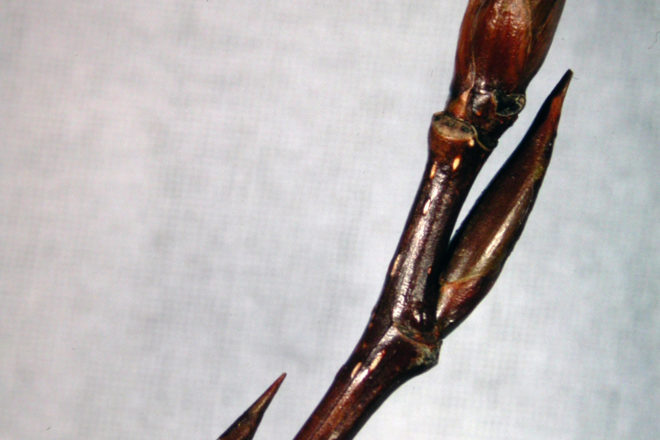 Late February is not complete without several bouquets of fragrant balsam poplar and the intricately flowered Canada buffaloberry and moosewood (or leatherwood) twigs decorating our kitchen or living room.

Our very favorite is the balsam poplar, better known to old-timers as either tacamahac or Balm of Gilead. It was our friend, Miss Emma Toft, master at living expediently and frugally and who was so knowledgeable about the really wonderful and often hidden aspects of life, who introduced us to the balsam poplar “perfume.”

The mixture was also rubbed onto the edge of the nostrils so the balsamic odors could flow through the respiratory passages, opening them in case of congestion. 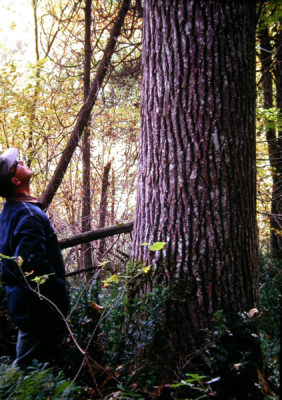 Several small bouquets of the balsam poplar twigs placed throughout our home will soon begin to exude sparkling amber droplets of pitch and will permeate every room with heady balminess. Having slowly absorbed water from the vases, the buds will begin to leaf out in a few weeks. The thin, tacky coating on the leaves will intensify the aroma of the twigs.

The balsam poplar is widely distributed in the eastern third of the state and up into the northeastern border of the United States. They are by far the largest of the sub-Arctic trees. Early voyageurs plying such rivers as the Mackenzie in the Northwest Territories or the Churchill in Manitoba surely welcomed the sight of these towering trees, as tall as 100 feet, in that otherwise flat and monotonous landscape of the tundra.

Leaves of the “tacamahac” are quite broad, generally oval, pointed at the tip and have a distinct leathery texture. They are dark olive green above and light rusty whitish below. The bark is smooth and reddish-brown at first, gradually becoming olive gray and quite deeply furrowed.

The tree can grow 50 feet in 20 years. Unfortunately they are prone to heart rot. I have seen quite a few balsam poplars struck by lightning almost as though they are drawn to that awesome atmospheric force.

Look for these trees on the edges of bogs and swamps, riverbanks, shorelines and in bottomlands. Their lives are short and vigorous and they demand plenty of light.

Viewed in an ecological perspective they are pioneers like their cousins the aspens and serve as nurse trees near the edge of the forest or in openings. Other trees, such as spruces and pines, will grow well in their shade but will eventually overtake and crowd the poplars out of existence.

The poplars of the world can be divided into four groups – the white, balsam, black and trembling. The white poplar, planted as an ornamental and frequently bordering orchards in this region, is native of Europe. The balsam poplar and the black cottonwood (really neither black nor a cottonwood) represent the balsam group. The black cottonwood may be the tallest broadleaved tree in America, about 225 feet. The well-known and often despised eastern cottonwood is a member of the black poplars, while the trembling (or quaking) and the large-toothed aspens belong to the trembling group.

All poplars happen to be dioecious (dy-EE-shis), meaning there are separate male trees and female trees. It is the pistillate (female) trees that one should try to avoid planting as ornamentals. Their long cottony seed catkins, such as on the eastern cottonwood, tend to become very messy in spring and will clog eave troughs and sewer pipes.

The Lombardy poplar (Populus nigra italica), native to Italy, is a variety of the black poplar. They are extremely fast growing, short-lived and dominate the landscape when overplanted, as is so frequently the case. Males generally are taller and more slender, while the female trees tend to become quite beamy.

One of the most unusual uses of tacamahac trees was discovered years ago by bee keepers. It was learned that honey bees collect the fragrant but sticky bud coating, referred to as “bee glue,” and use it to seal crevices of the hives or to varnish certain cells in the hive before eggs are laid in them. Consequently many balsam poplars, or Balm of Gileads, were planted near apiaries. Thin veneers of the close-grained wood were used to make berry boxes before the Plastic Age hit us in the midsection.

Early practitioners used the balsam, derived from the enlarged spring buds, for producing cough medicine. The resinous coating was separated from the buds in boiling water. It was listed as having an agreeable, incense-like odor and an unpleasant bitterish taste. Years ago quantities of the balsamic juice were collected in Canada and sent to Europe under the name of Tacamahaca.

My favorite way of using the tacamahac is to gently squeeze one of the buds between my finger and thumb, then transfer the sweet-smelling resinous pitch to other parts of my hands. The fragrance lasts and lasts, an entire afternoon for that matter, if you don’t wash your hands!