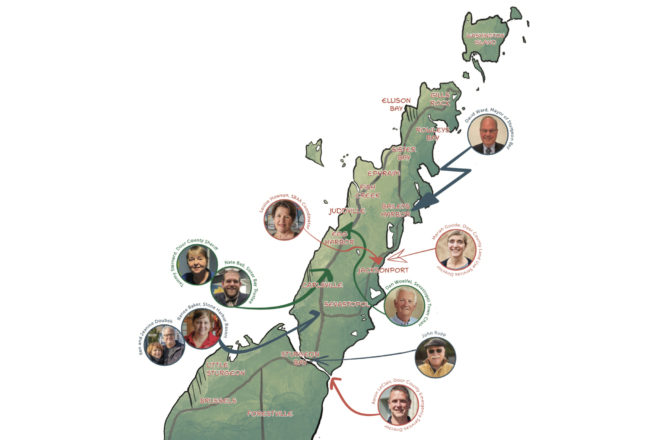 It’s a phrase we use a lot on the peninsula in casual conversation, in county government deliberations or just giving directions. We use it so often that we rarely stop to think about what specifically we’re referring to when we say “Northern Door.”

I didn’t realize this until it came up as we were refreshing our style guide for this newspaper a couple of years ago and our extremely thorough copy editor Paula Apfelbach pressed me on the matter. What, precisely, is the line that demarcates north from south? Or is there another region – a Central Door – between the two?

I was, of course, annoyed by this line of questioning. “It’s Egg Harbor and north,” I said, confidently. But as we discussed it more and more, the line appeared to blur. Does that include the Town of Egg Harbor, or just the village? Is Carlsville in the north, south, or central? And if Northern Door does start in Egg Harbor on the bay side, where does it start on the lake side? Baileys Harbor? Jacksonport?

Hmm. The copy editor’s question had proven valid, as is almost always (begrudgingly) the case.

In 2019 the housing study commissioned by the Door County Economic Development Corporation split the county into three distinct regions. In that study, Northern Door started at the northern border of the Town of Sevastopol. Central Door included the towns of Nasewaupee, Sturgeon Bay, Sevastopol and the City of Sturgeon Bay, and everything else was defined as Southern Door.

We sent our photographer Rachel Lukas around the county to ask folks on the street what they thought, and we made some calls to some familiar county faces to get their responses as well.

The responses didn’t provide a unanimous answer, though the most common seems to be a line close to the south end of Egg Harbor over to Jacksonport, somewhere near County I (though one friend said he moved his line north after the Little Ceasar’s sign went up).

Where do you draw the line? Shoot us an email at [email protected] and let us know. Then we’ll move on to the next big question – where does Southern Door start?

“To me Sturgeon Bay and north is Northern Door, and south of the city is Southern door.”

“It’s definitely north of Sevastopol. I’d draw a line from Egg Harbor over to Jacksonport, maybe some would say Baileys Harbor to Fish Creek.”

“I always draw a line between Baileys Harbor and Egg Harbor. North of that line is Northern Door. Maybe Carlsville and Jacksonport could sneak in there. And Washington Island is its own thing.”

“I grew up in Jacksonport, and we always kind of thought it was north of the canal was Northern Door. If we have friends south of there we’d have to get on their case because they were scared to cross the bridge.”

“To me it’s a line from Egg Harbor to Jacksonport.”

“Depends on who you ask! Is it Carlsville or Egg Harbor? Jacksonport or Institute? I’d personally say Jacksonport and Egg Harbor and north.”

“I think of it as Carlsville and Jacksonville and north.”

“The Carl/Jackson Line, no question. County I from Carlsville to Jacksonport.”

“The Bayview Bridge in Sturgeon Bay.”

“The Highway 42 and 57 intersection just north of Sturgeon Bay.”