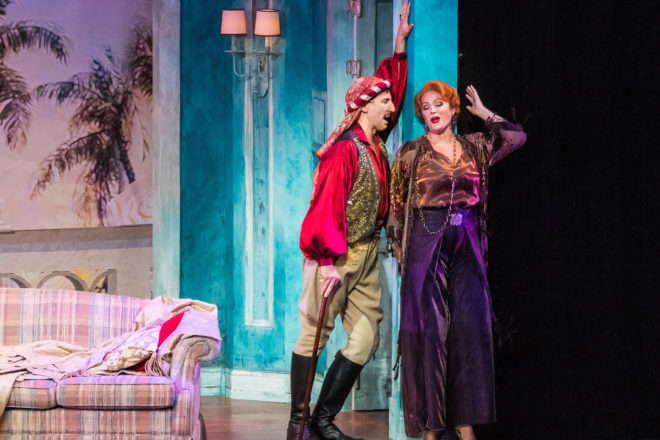 (Left to right) Sean Fortunato and Megan Murphy during the musical number “I Am Aldolpho.” Photo by Len Villano.

Before last week, my husband and I were embarrassed to admit to being Peninsula Player virgins. After all, the acclaimed theater has been in operation the entirety of both our lifetimes added together plus some. So the decision to end the nonsense had come with a recent anniversary celebration and the approaching premiere of a show described as a “delightfully smart and funny Jazz Age musical with show-stopping song and dance numbers.” Having a dance background myself, I was drawn to the promise of a musical production and was eager to experience the theater I’ve heard so much about. 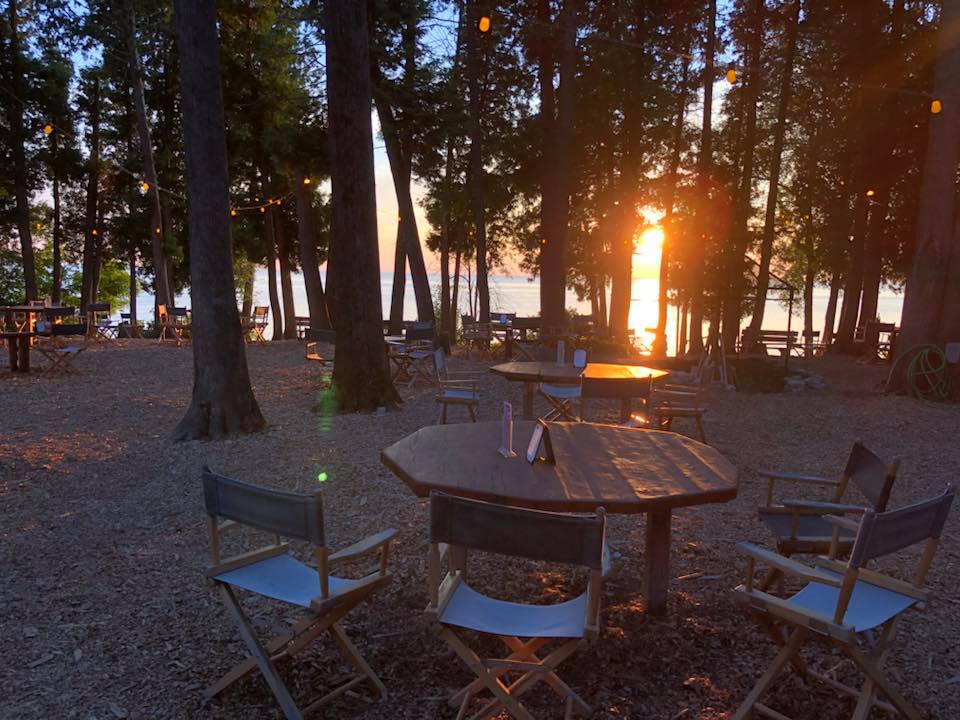 Located on the shore of bayside Lake Michigan, the Beer Garden is an ideal sunset watching spot.

On the Tuesday evening of the show, we arrived early (as the website recommends) to find parking and enjoy a beverage in the outdoor Beer Garden before curtain call. And we were glad we did; the evening was warm, sunny and walking through the wooded paths toward the theater I had the sense of being transported to a magical setting. The gorgeous architecture of the building along with the golden hour light flowing in from the shoreline set the stage for a fantastical evening of entertainment. 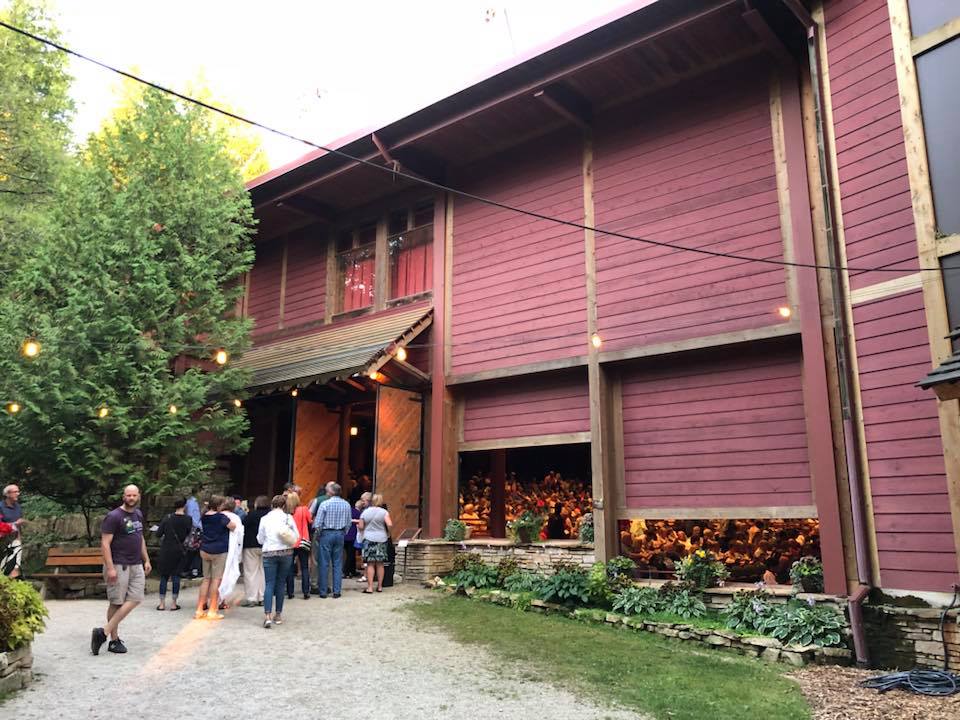 View of the open-air theater from the Beer Garden.

As the lights dimmed and we settled into our seats, a monologue began. Being the newcomers, we weren’t sure if this was a standard pre-show announcement or the actual start of the show. The voice spoke empathetically to the pre-show musings of the audience as we listened intently. Then the curtain rose, lights came up and it was revealed to us that we were in fact being addressed by the show’s narrator, Man in Chair, played by Greg Vinkler. This man guides the audience through the show-within-a-show that begins when he puts on the record of his favorite old musical, The Drowsy Chaperone. As he listens along to the record, his apartment transforms into a stage full of an entrancing cast telling the tale of a 1928 love story.

The colorful characters of the musical stand out individually and work together like a close-knit cast does, playing off the personalities and strengths of each. Throughout the show various high-notes were struck: Erica Stephan, playing Janet, the bride-to-be, performed both vocal and physical acrobatics in the number “Show Off;” Drew Humphrey, playing Robert, the groom-to-be, and Joe Capstick, as the best man George, display wonderful tap dancing agility as they gracefully croon “Cold Feets;” and the drowsy chaperone herself, played by Megan Murphy, exuded a lush confidence singing “As We Stumble Along,” partially due to her liquid bravado despite the Prohibition-era setting.

The height of the exuberant antics was reached when Sean Fortunato, playing Latin lover Aldolpho, serenaded the audience with “I Am Aldolpho,” a tune meant to cement his sauve and sensual persona securely into the mind of his love interest. Your funny bone is bound to be tickled by his exaggerated swagger and over-the-top encores as Man in Chair notes to the audience, “This was my mother’s favorite number in the show. I think it was her secret fantasy to be swept off her feet by a Latin lover.” 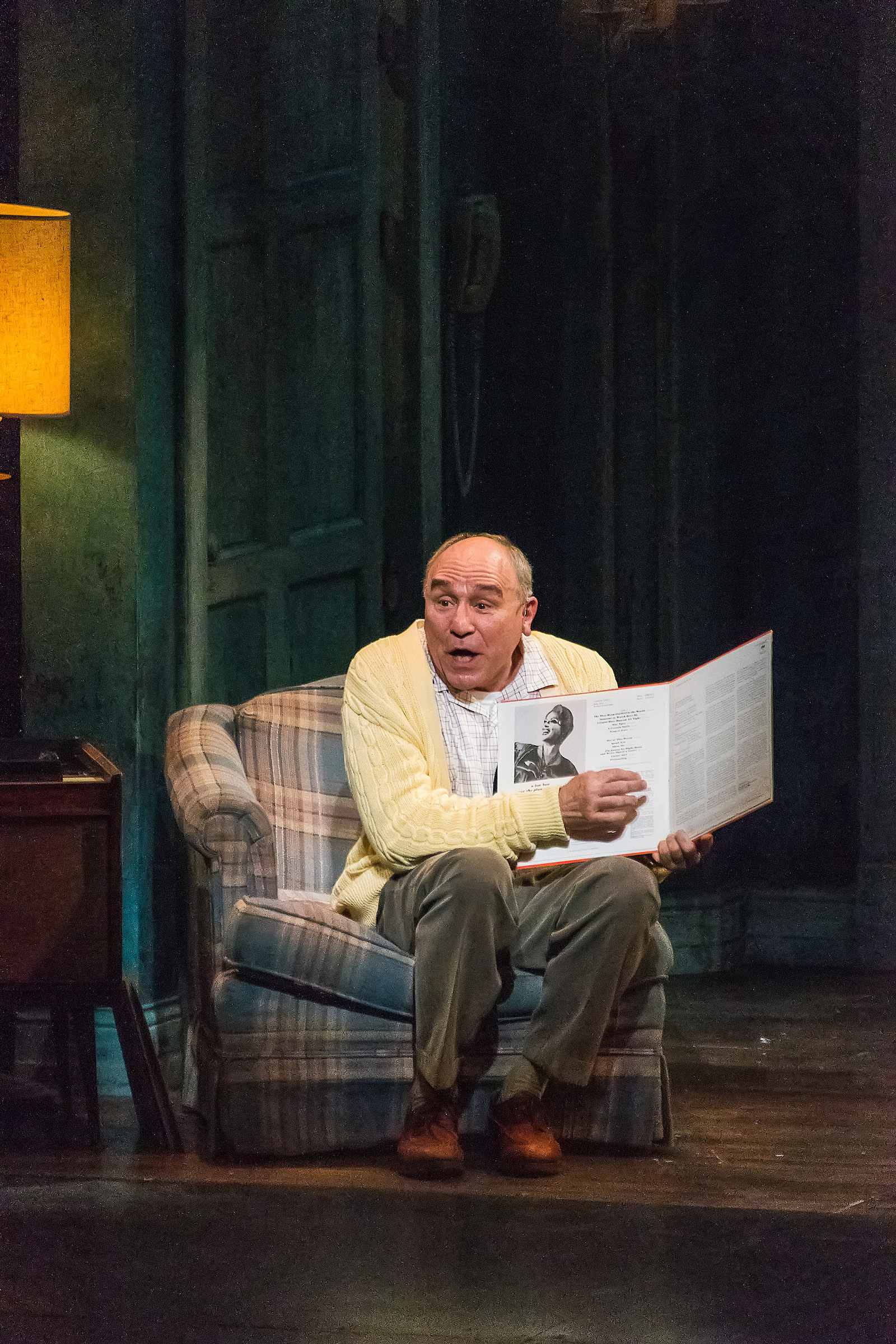 Greg Vinkler as Man in Chair. Photo by Len Villano.

Our experience was full of sideways glances at each other while we laughed at jokes that parodied the 1920s – which for the most part poked fun in a loving way, while also recognizing the elements that have not withstood the test of time. As Man in Chair remarks, “Look, I know it’s not a perfect show … But none of that matters. It does what a musical is supposed to do: it takes you to another world.” We were fully entertained by the show-biz nature of the musical pieces and energy brought to the stage by each player. But it was the Man in Chair and the breaking of the fourth-wall from the very start of the show that made you truly lean in and be immersed in the story. You as the audience are a character of the show and between the show tunes and dance numbers, you find yourself forming a relationship with Man in Chair, making the entire show that much more memorable.

The Drowsy Chaperone is being performed through Aug. 12 at Peninsula Players. Visit peninsulaplayers.com or call 920.868.3287 to get ticket and show information.