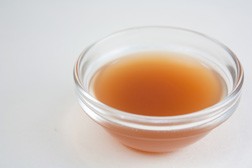 A common addition to salad dressings or marinades, the strong punch of apple cider vinegar may have more health benefits than we once believed. It can help with an upset stomach as well as the hiccups, but the liquid’s biologic effects are where researchers are getting excited.

Studies have shown apple cider vinegar to be effective in controlling blood sugar, helpful in diabetics but still useful to others. After a starch-heavy meal, consisting of foods like potatoes and pasta, consumption of apple cider vinegar can slow the absorption of carbohydrates, creating a gradual change in blood sugar instead of a rapid change. This slow release of carbohydrates can prevent the sluggish post-meal feeling and provide sustained energy instead of a sugar rush.

Apple cider vinegar may also help in controlling the pH of the blood, essential for brain and muscle function.

Due to its high acidity, apple cider vinegar should not be consumed straight to avoid damage to tooth enamel and the esophagus. Try stirring a tablespoon in a tall glass of room temperature water after a meal or immediately in the morning.