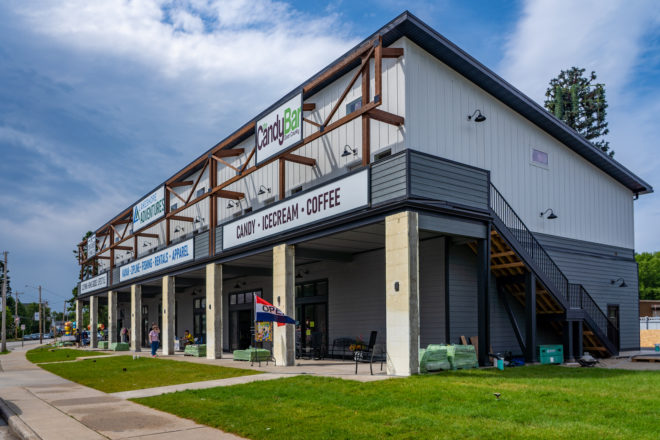 This building, constructed by Todd Haleen, has space for his business and a few others, and it will house 30 people in 11 units on the second floor.

I attended a panel of school resource officers this week that Chief Deputy Pat McCarty with the Door County Sheriff’s Office convened for a story our new reporter, Sam Watson, is working on. When the conversation turned to bullying, we heard the biggest challenge at local schools is cyberbullying.

This comes as a surprise to probably no one, and it’s not unique to Door County, of course. Neither does it happen only among the student body of one school district, given that cyberspace has no boundaries. The taunts, threats, criticisms and shameful behaviors cross districts, cross counties and sometimes come from other states – as happened in one case in which a student who had moved away still knew the local district’s social networks and started a bullying campaign.

The days have long passed when adults could pull kids apart with a firm “Break it up!” The painful verbal punches, hits, criticisms and ridicule arrive soundlessly and are borne silently.

Where do students learn to interact with their peers on social media like this? Who are they modeling except adults?

Adult cyberbullying is so common that we don’t even classify it as such. We call it “free speech” or “expressing our opinion.” We even bully the bullies. Those people are the “haters.”

Last week, a new Baileys Harbor building incited a social-media maelstrom of verbal punches, hits, criticisms and ridicule when the new signs were erected. The building, constructed by Todd Haleen, has space for his business and a few others, and it will house 30 people in 11 units on the second floor.

Businesses have already moved in and are open, but the building isn’t completely done, he told me last week. Some of the final touches include cladding the columns with stonework and planting trees in the grassy area between the building and the sidewalk.

Haleen, a Door County native who primarily makes his living on the water, constructed the building in less than a year. He said it was the hardest thing he’s ever done, and he did it to create some workforce housing, to bring more retail to Baileys Harbor, to cement his business, to find a way to retire and to give his four children an option for a way of life in their hometown.

Haleen began working on the building last fall, and this project was the opposite of a secret. A rendering of how it would look, complete with the signage, was posted out front on a big, wooden sign throughout construction. We ran a story late last year when he began construction and published that same rendering showing the building and the signage. He worked with the Town of Baileys Harbor even more than a developer normally would because a state grant for workforce housing was involved.

Yet once the building went up and the signs were placed last week, people reacted with surprise, and many recoiled in horror. The social-media venom was strong. Some people supported Haleen, but harsh criticism reigned. The building, but more so the signage, basically became the symbol for “all that’s wrong with Door County development.”

Haleen told me the signs look larger than they did in the renderings and that if he could do it over again, maybe he would make them a little smaller. But he’s out of gas and out of money, and he followed all the local zoning laws. Baileys Harbor has County of Door zoning, and the signs are in conformance with that code, as are all aspects of the building.

Plus, Haleen thinks the signs and the building look nice.

Which, in this case, is the point. If the building and signs are in conformance with the zoning code the town has adopted, that means all the cybercomments come down to vehemently expressed preferences. Good luck changing someone’s taste with your opinion.

What can people do rather than dump their emotions on social media, which never accomplishes anything anyway? They can investigate how this building came to be, which zoning laws and codes informed it, including the signage. They can gather like-minded individuals and take it through proper channels, and work to help create the kind of community they want for the future, including its aesthetics.

This doesn’t change what has already happened. Preparing for the future is also a long process and not for the faint of heart. But it’s called civic engagement, and we’re all supposed to know how to do this. Trying to influence people in the cyberworld has certainly become an easier way to engage, but it doesn’t change our communities. It doesn’t teach our children that civic engagement is the only way to positively impact the real world that all of us who live here share.