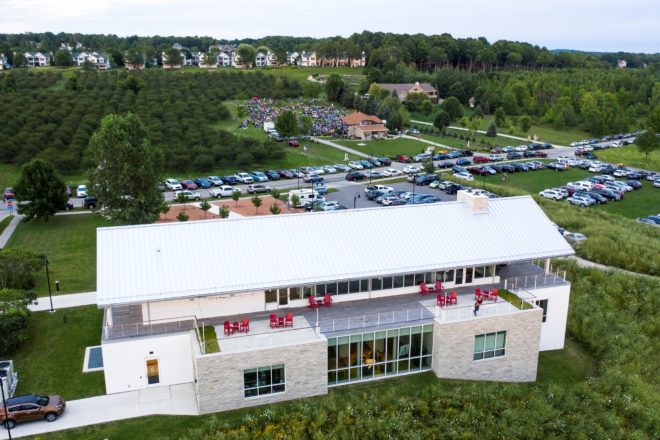 Church Street in the Village of Egg Harbor, behind the Kress Pavilion. Photo by Mark Drexer.

As coronavirus vaccines were rolling out in record time, the Village of Egg Harbor inched forward on updating parking regulations several years into evaluating the situation.

The Village’s Plan Commission forwarded two specific recommendations to the board of trustees. The first was to eliminate the rule that allows businesses to count all on-street parking within 500 feet of the business toward its required parking spaces, but to still allow businesses to count spaces adjacent to their property. The other was to increase the Fee in Lieu of Parking (FILOP) that new businesses have to pay if they do not have space on their property to put in enough parking spaces. The commission recommended increasing that fee from $50 to $200 per space.

The trustees took a different route. The board did not make a decision on the FILOP after rehashing a debate the village has had several times about what the appropriate fee should be. No businesses have to pay the current fee because they can count parking spots within 500 feet of their business toward their required spaces.

However, the village did vote to direct staff to change the ordinance so that businesses may not count any on-street parking spaces toward their allotted spaces. The board will consider the revised ordinance during a future meeting.

Trustee Joe Smith said the 500-foot rule was adopted several years ago to spur business investment in the village at a time when it was languishing. In the years since, the village has seen significant growth with the expansion of Shipwrecked and the addition of the Kress Pavilion, One Barrel Brewing Co., Hatch Distillery and Fireside restaurant.

“Compared to elsewhere in the county, our calculations for parking are a joke,” Heller said.

“Anyone who has a parking lot has been affected,” she said. “Us, Maxwell’s House, Nature Works. For those of us who pay for parking and see it abused by others, it is a problem.”

In October, the State Smart Transportation Initiative completed a study of the village’s parking needs and determined that at peak use, the village is short about 90 parking spaces. But that number “should be taken with a grain of salt,” the report said, because usage depends on business use and time of day.

The village will reconstruct Church Street in 2021, adding sidewalks, streetlights and parking to the road that sits about a block and a half from Highway 42.

The Library Committee proposed the village go to voters with a 10-year, $150,000-per-year referendum to fund the operations of the Kress Pavilion. The board sent the committee back to work.

The Kress has operated at a shortfall of more than $128,000 each year since it opened, which the village has covered. But the village had hopes it could close that gap significantly by hosting weddings and events.

The Kress provides a mix of paid private events and free public programs. More than $70,000 in paid events are booked for 2021.

Manager Jess Reinke said the best-case pre-pandemic scenario for the pavilion forecast about a $120,000 annual shortfall. The committee set the $150,000 number to build a reserve fund for large future expenses in addition to covering the shortfall, but several trustees asked the committee to trim that number and shorten the duration of the referendum. Smith said the village does not maintain a reserve fund specific to other facilities, but pays for large expenses out of the general fund as they arise.

“To me, 10 years seems awfully long for a referendum item,” Smith said.