Its rusted steel stands contorted, twisted to the west where a monster tornado ripped ashore on an otherwise quiet late August evening 14 years ago today.

That F3 tornado (the strongest are rated F5) devoured the shoreline just south of Frank Murphy County Park, climbed the bluff toward Highway 42, and tore through the fields and woods a few miles south of the Village of Egg Harbor. It destroyed Sunnypoint Gardens and the Bel Air Motel. 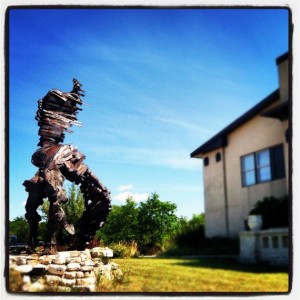 The sculpture in front of the old Sunnypoint schoolhouse on Highway 42, about three miles south of Egg Harbor.

Then the tornado began whipping pieces of the Cornerstone Suites into the rows of the fields surrounding , and it’s wide swatch demolished much of the old Sunnypoint Schoolhouse as well. According to the National Weather Service, the twister was on the ground for nearly 14 minutes, carved a path of damage 5.1 miles long, stretched up to a half-mile wide, and caused damage estimated at nearly $7 million.

Miraculously, the massive funnel cloud did not kill a single person and injured only two.

About a year later a sculpture appeared in front of the old Sunnypoint School. It’s mangled shape, massive body, and three tiny legs were unmistakable – an homage to the tornado that ripped across the very ground it stood on.

At least it seemed unmistakable.

“It has nothing to do with the tornado,” says its creator, Latvian artist Janis Mintiks. “It actually started about 40 years ago when I was studying at the Layton School of Art in Milwaukee.” 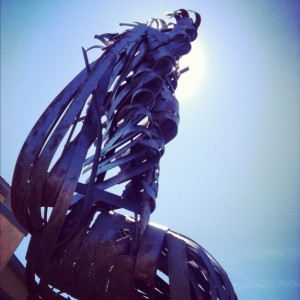 The twisted steel of the wings and torso of the Valkyrie.

There Mintiks was out fishing one day and came across the shallow remnants of an old wreck. He pulled some hunks of steel out of the water and set to work reshaping them.

He fashioned the metal into a Valkyrie, a female figure of Norse mythology who decides who dies and wins in battle.

“It’s inspired by the Wagner opera,” Mintiks says, referring to composer’s famous Ride of the Valkyries. “That’s basically what it’s all about. The Valkyrie was a very romanticized piece.”

So why does it stand in front of an old schoolhouse in Egg Harbor?

“I didn’t have anywhere else to go with it,” says Mintiks, who now lives in Taos, New Mexico.

Mintkis is friends with the property’s owner, Guntis Lauzums, and gave him the scultpure to Lauzums as a gift before the tornado came through. It stood behind the schoolhouse, but after the tornado some men from the Lions Club were helping them clean up debris when they found the sculpture.

“One of the guys said, ‘Look what the Tornado did, it twisted it all to hell,’” Mintiks recalls. “We let them believe what they wanted to. The tornado certainly made a mess out of that part of the world.”

They added some parts to it when they placed it out front, giving it a very particular purpose.

“It’s not minimal, not abstract,” he says. “It has two legs and some wings. It’s pretty literal. But, people have always thought it had something to do with the tornado.”

And to many who remember the roar of that tornado, the fear of wondering whose lives were lost, and the relief when we learned none were – it remains a symbol of a terrifying summer evening as the season wound to a close.