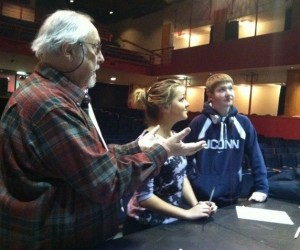 With the bright lights of the Door Community Auditorium stage beaming down, Henry Timm conversed with engaged and animated students on the madness of playwriting. These seven teens were tasked with the goal of writing a play in the limited time between school’s beginning and the ever-looming deadline of lunch hour.

Like pulling pearls from a murky pool, Timm plucked ideas from the young minds participating in his workshop. Propositions were made and terminated as quickly as they were voiced. Timm was not too picky as to what went on the page saying, “Put it down, anything, anything. We can change it later.”

Gibraltar Freshman Casey Michelic echoed Timm’s idea by voicing his own, “Roll with it, roll with it,” he said.

Slowly, a play was formed from the tiniest details and broadest concepts. The story of an Asian boy named Num-Num finding a dragon egg while playing in the rice paddies becomes the most solid plan in a slew of half-made suggestions.

The activities of the workshop ranged from playwriting itself to Timm’s tales of ancient Greek myths and religious analogies. When this captivating cycle paused Timm rewarded the kids in his workshop with stories of his theater experiences. He began acting on his back porch in neighborhood plays at age 10. Timm’s first written play was The Dog Who Listens to Bach. He studied at the University of Oslo in Norway for a year and stayed in the country for an additional year. All of these stories and more poured from his poetic mouth.

Before returning to his workshop, Timm said something that was particularly memorable. “[Theater] always starts with the word, but ends with the word in the body and the body in the word. They are interchangeable.”