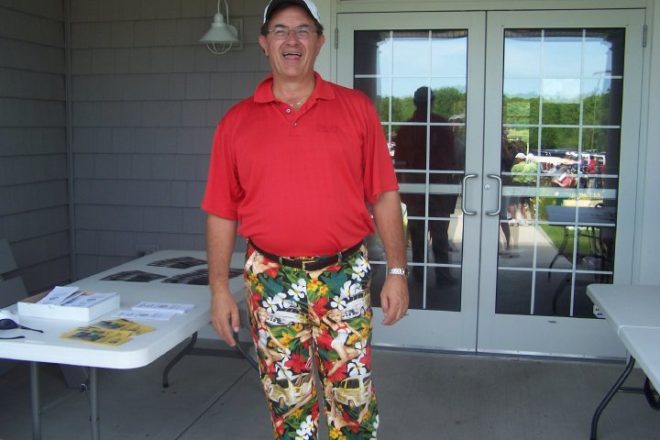 Nearly 20 years ago, when Jim Sarkis was on the board of Door County Child Care Center, the organization was proposing a rummage sale to raise funds for new play equipment.

“That’s going to make us what, a couple hundred dollars?” he said.

He wasn’t having it. Instead, he created a golf outing, corralled dozens of his friends to play, and began a tournament that would raise more than $100,000 for Door County charities in the ensuing years.

“Golf was a huge passion of his,” remembered his wife, Megan. It’s not about your score, it’s about who you play with. He loved all the people who played in the event. The friends, business acquaintances, some of the old NFL players. Paul Coffman, Lynn Dickey.

In the early years he turned his attention to women’s and children’s charities, his mind on his own two daughters, Carly and Madeline, and his son Adam. Funds went to HELP of Door County, day care centers, Make A Wish, and Sunshine House.

Then in 2014 Jim was diagnosed with brain cancer. That changed everything for Jim and his family.

“I certainly am not the same person I was before Jim was diagnosed,” Megan said. “You’re always in such a hurry I guess, whether it’s work or family or kids.”

Jim was a dealmaker. He launched Sarkis and Associates real estate office in 1982 and built it into one of the county’s most well-known firms. His ear was always to the ground, listening for opportunities, developments, and the next direction the real estate world would turn.

Then cancer happened and their lives changed.

“There wasn’t a day that went by that I didn’t wake up or go to bed thinking about cancer,” she said. “But we were the lucky ones because we did not have to worry about paying our bills. I can’t imagine being diagnosed and wondering if I’m still going to have my job, or pay my electric bills. It’s hard enough to worry about cancer.” 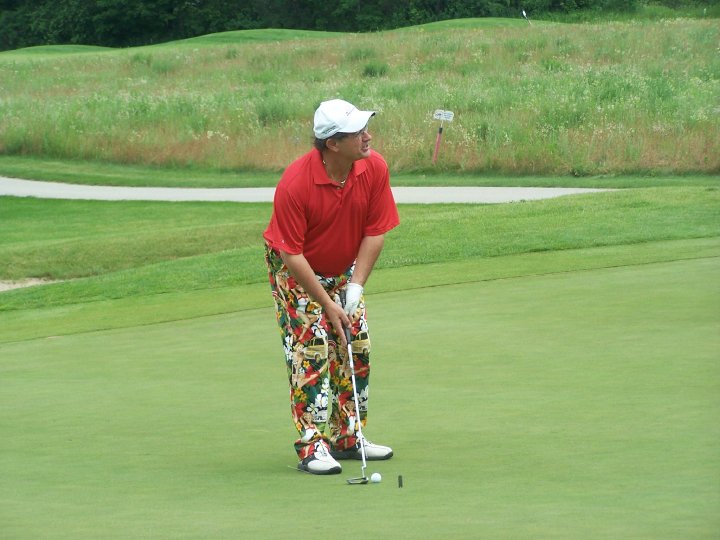 With the diagnosis came a new goal for Jim’s outing and the organization he formed, Door County Charities. Most of the funds would now go to Door CANcer, to help families keep the focus on their battle for their life, not paying their next bill.

“He never lost his positive attitude,” Megan said. “He tried to live the best and most positive way he could.”

In his final months he was trying to figure out a way to keep the golf outing and charity going, knowing the end was near. He told Horseshoe Bay Golf Club it was on, and called his friends to get them to play. But when he died in April, at age 65, there were many loose ends.

Megan, Carly, Madeline and Adam knew what they had to do.

“As long as I can remember, my Dad was a huge philanthropic man,” Carly recalled. “He always donated when he could. Now that I’m older I appreciate this a lot more. He started it as a charity to give back to women and children. I loved how positive about it he was. After he passed away, it just became a natural instinct for us to pick it up.”

The Monday after Father’s Day the tournament was on with a new name, the Jim Sarkis Memorial Golf Outing. Cardboard cutouts of Jim in his goofiest golf attire welcomed players, Carly emceed, and Jim’s family and friends raised $20,000 for Door CANcer.

“That night, I was just so moved by all these people and how much love they had for my Dad,” Carly said. “I love carrying his name and legacy along with it. I think my Dad would be really proud.”

The tournament and Door County Charities will live on, Megan said, as will Sarkis and Associates, where she has taken the helm with the help of their staff, and a new outlook.

“I don’t think I take things or people for granted,” she said. “I tell people how much I love them. I stop, and I want to see things and not walk past things.”