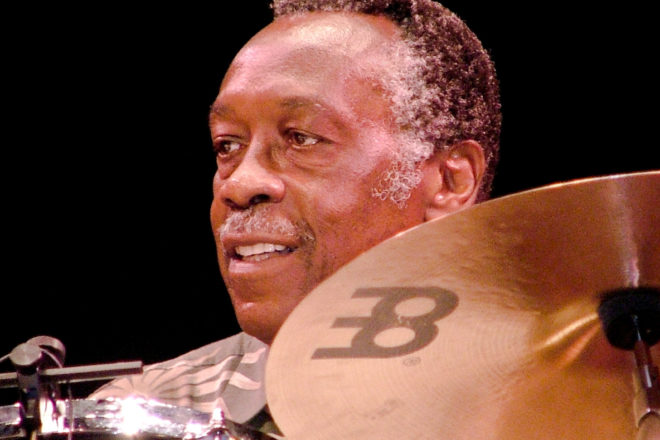 “Funky Drummer” Clyde Stubblefield in 2005 as a member of the trio performing on Michael Feldman’s Whad’ya Know show on public radio. Photo by Paul VanDerWerf.

It was always a pleasure to go to see a band in Madison and find that Clyde Stubblefield was behind the drums. Clyde had been a fixture of the Madison music scene since adopting the city as his home in 1971.

When I heard that he died of kidney failure on Feb. 18 at the age of 73, I immediately recalled the last time I ran into him at a Madison show. I don’t recall the name of the club, but he was drumming with the Madison band Reptile Palace Orchestra.

Clyde was there when we arrived, sitting by himself at the bar. I took a seat next to him and chatted until the show started. As usual, he was friendly and happy, even though he had been facing a host of medical problems – including surviving bladder cancer and having a kidney removed. You wouldn’t have known any of that by talking with him. He seemed upbeat and unbeatable.

As a fan of drumming and James Brown, I was well aware of Clyde’s reputation as THE Funky Drummer, so named by Mr. Brown himself for his punchy drum work.

“Ain’t it funky?” Mr. Brown asks on the record.

Clyde’s drumming on the 1969 recording of “Funky Drummer” made Clyde the most sampled drummer in history, with samples in more than 1,000 songs, ranging from Public Enemy’s “Fight the Power” to Kenny G’s “G-Bop” sampling Clyde.

While those samples were nice tributes to his work, they did not profit Clyde, who, when beset by medical problems, found that he had made his mark on the world.

Treatment for bladder cancer in 2000 amounted to more than $90,000 in bills. Madison musicians went into fundraising mode and raised $10,000 for Clyde. The rest of those medical bills were paid for by an anonymous donor. Last year, after the death of Prince, Clyde revealed that Prince was his benefactor back in 2000. The two had never met.

That is just one example of the regard the music world had for Clyde Stubblefield. As bassist Bootsy Collins posted on his Facebook page: “We lost another Pillar Stone that held up the Foundation of Funk. Mr. Clyde Stubblefield has left our frequency…”