Art Kaftan, a 20th-century attorney in Green Bay, always encouraged his six children to “follow your bliss.” It took a long time for Joe, his youngest son, to find that path.

Art was an artist, as well as a successful lawyer, but he loved art, too. As a young man, he took just one drawing lesson before becoming a watercolorist. After marriage, he switched to mosaics. Joe’s mother, Barbara, studied art at the Connecticut College for Women and was a photographer for the Green Bay Press-Gazette and a fine painter. After her second child was born, she became a stay-at-home mom and devoted hours every week to introducing her children to all kinds of art – sand casting, drawing, painting, papier-mâché – and encouraging them to experiment. Their home was full of good art.

There’s no doubt that Joe had both the genes and the background to become an artist, but he felt the poor eye-hand coordination and lack of fine motor skills that were symptoms of his dyslexia, would prevent him from being successful in that field. Reading and writing were also difficult, but to prove to himself that he could complete a degree in a “book” field, he majored in psychology at UW – Madison. That goal accomplished, he went back to school to study art. “If it hadn’t been for the dyslexia, he says, “I would probably have gone to art school from the beginning.

At the American University in Washington D.C., Joe studied graphic arts. Working as a graphic designer in Seattle, he designed book and CD covers and real estate brochures. “In a different age,” he says, “I would not have been a successful artist, because I don’t draw well, but Photoshop made it possible for me to be creative without drawing or painting.”

Dealing with the written copy associated with the artwork was sometimes a problem, but his older sisters, Niki and Laura, helped with proofreading. “I didn’t dislike my job,” he says, “but I didn’t connect with it in my heart.”

Ironically, it was a sad event in Joe’s life that led him to the bliss his father urged his children to seek. Art Kaftan had a stroke in 2003 and died in 2006. Until his mid-nineties, he’d continued his work with mosaics, as well as carving a section of a telephone pole each summer to decorate the yard of the family’s summer home on Bark Drive, along Lake Michigan north of Sturgeon Bay.

Wanting to find something he and his dad could do together after his stroke, Joe thought of his passion for mosaics and sketched a fish on a board. Although Art wasn’t able to help physically, it was meaningful to Joe that it was a joint project. After his dad died, Joe put the partly finished project in the basement, finding that the memories associated with it were too painful to deal with.

Two years ago, he resurrected the fish and completed it. “I thought I was just playing around with another art form, like glass blowing, glass casting and photography, that I’d tried earlier,” he says. “I’ve written songs and stories, too – been a ‘lesser artist’ in every form I could think of. I even wrote a poem once called ‘The Lesser Artist.’ It was about me, trying all these different things and realizing at the end of the day that I would never impact myself or anyone else. And then I became a mosaicist.

“Even though I grew up watching my dad create mosaics, until I sat down and did one with him, it never occurred to me that I could express myself this way. It has changed my life. I’ve found a medium that utilizes my talents and ignores my deficits. I flourish as a mosaicist. It makes me happy and brings joy to others.

Joe primarily uses the “direct method” of creating his mosaic pieces, doing a rough sketch on wood, then using “nippers” to cut tiny bits of half-inch colored tiles called smalti to build, bit by bit, an intricately shaded picture. Smalti from Mexico is softer in hue, with slight gradations in tone. He also uses Italian smalti, that has a shine to it. Art Kaftan heard about Italian smalti in the late 1960s and, with a friend, went to Venice and filled their backpacks with it. Joe still has some of that treasure, and it’s still available from the Orsoni family that’s been producing it since 1888. Joe also orders sheet glass that he has cut into 12-inch squares and then cuts the shapes he needs with a tiny oiled glass-cutting knife.

When Art Kaftan was creating mosaics, he assumed he was the only person in the world doing that kind of art. Joe, in the beginning, had the same feeling. “I began,” he says, “not knowing anyone else in the world who was creating mosaics. Then I discovered vibrant mosaic communities in Door County, Green Bay and Seattle. Door County, especially, was a real eye-opener for me.”

Joe mentions Karin Overbeck, Angela Lensch, Barbara Henderson, Pam Murphy and Bruce Basch as local artists from whom he’s learned a lot and who have been supportive of his work. “I’ve benefitted from their knowledge and their materials,” he says. “It’s been a delight. What other place has so many beautiful, talented people and opportunities?”

With his siblings, Joe spends several weeks each year at the family’s old summer home. Its walls are filled with art they and their parents have created and the work of other local artists they admire. Joe is not the only artistically talented Kaftan. His oldest sister, Niki Kaftan Newman, creates gorgeous pastel pieces, based on photographs she takes in Door County. She met her husband, Craig, at the California Institute of Art, and they are both film animators, having worked on Star Wars and many other sci-fi movies. Their son is now working on a master’s degree in art at his parents’ alma mater. One of Joe’s nieces will graduate next year with a degree in art education, and another is a freshman art major this fall. 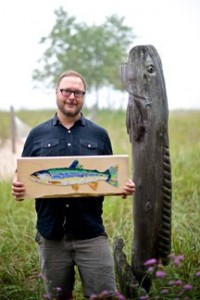 Joe hopes he’s fostered some of that talent through Uncle Joe’s Summer Camp – an art/kayaking event he held for many years for his 13 nieces and nephews. “My mother spent so much time instilling the love of art in the six of us,” Joe says. “I wanted to be sure the next generation also grows up with creative art experiences.”

Now that Joe Kaftan has found his bliss, he’s giving young family members the opportunity to check out a path to their own. And Joe hopes to continue working full-time as a mosaicist. “I have probably 500 ideas ready to go,” he says, “mostly from photos taken in Door County, and at least 100 of them drawn out.”

An exhibit of his work, focusing on water and landscape scenes, as well as images of fish and birds, will be up until Oct. 15 at Base Camp Coffee Bar in Sister Bay. His mosaics are also in the Angela Lensch Gallery in Egg Harbor, the Flying Pig in Algoma and Popelka Trenchard Glass in Sturgeon Bay.