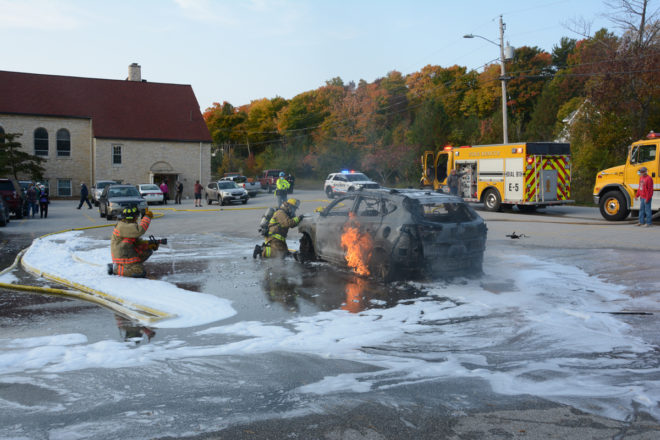 Baileys Harbor – Firefighters with the Baileys Harbor Fire Department doused a burning Hyundai SUV in the parking lot of Stella Maris Catholic Church in Baileys Harbor on Oct. 9. The firefighters arrived on the scene fewer than two minutes after being dispatched around 8 am.

“When the call came in to us, the car was already engulfed in flames,” said Baileys Harbor Assistant Fire Chief Eric Peil. “Almost two minutes later, it was almost unrecognizable.”

The owner of the vehicle had arrived a couple of minutes late to morning mass, parked in the back and was inside the church when the vehicle burst into flames. Other than total-loss damage to the car, nothing else caught fire, and no one was hurt.

When the call came in, dispatch alerted emergency responders to the proximity of the outdoor restaurant operation next door, so Peil immediately called for backup. The Ephraim and Gibraltar fire departments responded, as did Door County Emergency Services and the Door County Sheriff’s Office. At one time, by Peil’s estimate, there were five fire trucks and 20 responders on the scene. Within 10 minutes, firefighters had shot 1,600 gallons of water and seven gallons of compressed air foam onto the burning vehicle to douse the flames.

“We can use a lot less water if we use foam,” Peil said. “So if it’s a vehicle, it snuffs it out really fast.”

The car was charred to the metal. The cause of the fire is still unknown, but it is not suspicious.

“If I had to speculate,” Peil said, “it was in the engine area for sure.”