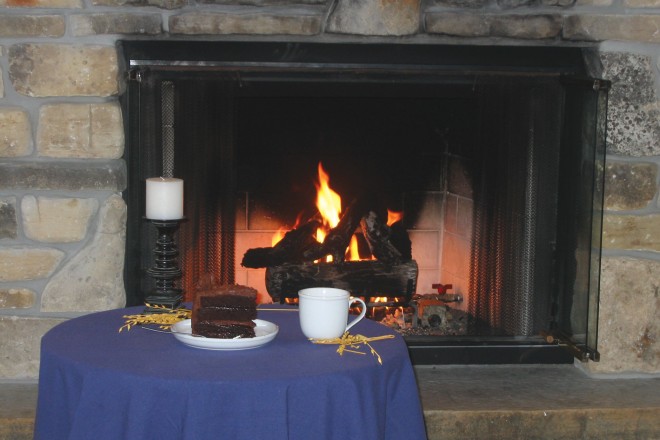 Whoever would have thought that a little black bean could be powerful enough to create a culture all its own? But small as it is, the coffee bean has resulted in a phenomenon that crosses cultures around the world. In the years since the simple bean was first discovered by an Ethiopian goat herder, drinking coffee has created social and cultural centers where people congregate to talk, write, read, and most recently, partake in entertainment. And so the “coffeehouse” was born.

In keeping with the tradition of the American coffeehouse inaugurated in the late 1960s, each winter the Door Community Auditorium (DCA) hosts entertainment in the intimacy of the fireplace lobby. Limited to 80 seats, guests are invited to share a cup of coffee with friends while performers share their talents in a small setting reminiscent of the old coffeehouse atmosphere.

“When we began the coffeehouse concerts in 1999, it was with the local community in mind. We wanted to provide them a place to go in the middle of winter and enjoy really good music,” explained Pete Evans, DCA program/technical director. “Our goal was also to showcase our local talent.”

Historically, the advent of the coffeehouse corresponded with the rise in coffee’s popularity. As early as the 16th century, the coffeehouse was the gathering place for men to drink tea or coffee, play chess and backgammon, listen to music, and read. A proliferation of coffeehouses in Europe followed soon after. By 1739, there were 551 coffeehouses in England serving most frequently as centers for political discussion and debate.

Visiting England at that time, the Abbé Prévost of France is quoted:  “Coffeehouses are where you have the right to read all the papers for and against the government,” and named them “seats of English liberty.”

The American version of the coffeehouse is definitely more modern. With the advent of the “beat” generation  of  the 1950s, the coffeehouse became a venue for entertainment – predominantly the folk performers – as well as refreshment. The intimacy of the coffeehouse is a perfect setting for a small group or solo act. And it is that model that DCA used when the Fireside Coffeehouse Concerts premiered eight years ago.

“I can’t remember whose idea it was,” Pete said. “Terry Meyer [then executive director] and I were bouncing ideas off each other. I think we came up with the concept together; it was a real collaboration. And we just took the idea and got it going.” The first coffeehouse concerts provided seating for 100 guests and featured three performances, including Julian Hagen, Mink River Cartel, and Jimmy Kaplan & Friends.

In the winter of 2003, DCA took the coffeehouse concept a step closer to the original model. “We decided to provide refreshments during the concerts. So Kurt Thomas [assistant technical director] made bistro tables, we cut back the number of tickets a bit, added candles on the tables, and the atmosphere of the coffeehouse was resurrected in Door County,” smiled Pete. “And everyone loved it.”

Over the years guest performers have included some of the peninsula’s favorite entertainers featuring something from every musical style, as well as poetry readings. “We have had barbershop, classical, Celtic, rock and roll; but the most popular continues to be folk,” Pete confirmed. “But we love to try something new, so we’re always open to suggestions.”

The Fireside Coffeehouse Concerts have been a proven hit and Pete does not anticipate any significant changes to the established format. “We changed the start time last year from 8:00 pm to 7:00 pm; bedtimes have moved up for the baby boomers,” he joked. “Our maximum seating capacity is 80 persons and tickets remain $12. We want everyone to be able to attend,” Pete emphasized. “A majority of the concerts are sellouts, so we always recommend people do an advance ticket purchase.”

Guests can purchase a variety of non-alcoholic beverages and desserts to enjoy during the concerts. Espresso Lane, located in Baileys Harbor, will provide refreshments for this year’s Fireside Coffeehouse Concerts.

Although past concerts have, for the most part, featured local talent, “this year we are stretching outside the county,” Pete said. “We have featured most of our local talent so we’re crossing the county’s borders to include performers from Madison and Chicago. It’s going to be a very exciting season.

“We are very pleased with the community’s support of the concerts, and very grateful to the sponsors who underwrite the shows. It really is a collaborative effort, and the response is heartwarming,” concluded Pete.

Blending original folk music and alternative-country with the beat of pure soul/rock, multi-instrumentalist and vocalist Early Thomas performs with intensity and verve. The co-founder and front man for Soul Patrol, the acoustic musician is an intense performer whose concerts are cutting-edge.

Foot-stomping, hand-clapping country/bluegrass music is what Ryan Thompson and Deep Fried Grass do best. Following in the tradition of “the Father of Wisconsin bluegrass,” Bill Jorgenson, and country icon, Lee Greenwood, Ryan Thompson leads his band down the country road making all the right turns. The four-piece acoustic group features vocals accompanied by guitar, mandolin, and upright bass.

With his musical “roots” solidly planted, Ritt Deitz’s music is the fruit of years dedicated to performing traditional music and acoustic rock and roll. “Deitz works the same side of the street as Greg Brown and Bruce Cockburn, with songs that are concurrently earthy, ethereal, and intelligent,” Madison’s The Onion raved. Sons Wilder and Mitch, and Dave Foss accompany Ritt Deitz in concert.

Cowboy heroes and the Old West come to life when KG and The Ranger sing classic cowboy songs, yodel in harmony and spin a lariat. A lighthearted, magical musical journey way out west, KG & The Ranger invite the audience to saddle up their imagination for an evening’s ride into the Western sunset.