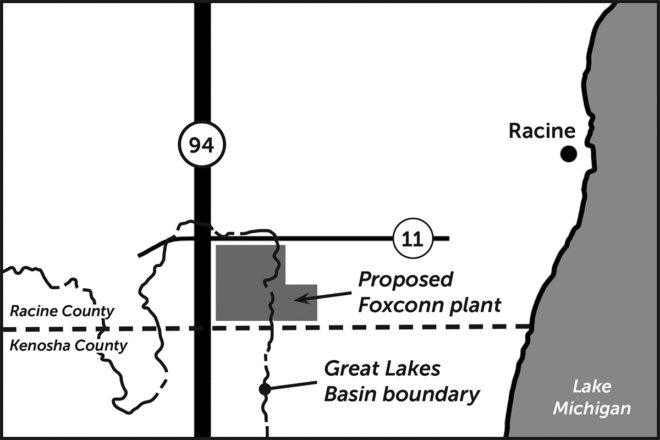 The Taiwanese tech-giant Foxconn is seeking permission to draw seven million gallons of Lake Michigan water daily to support its 1,200-acre campus proposed outside of Racine. The location of the $10 billion site and the company’s plan to return approximately 60 percent of the water back into Lake Michigan is triggering heightened scrutiny under the 2008 Great Lakes Compact.

A portion of the Village of Mount Pleasant, where the Foxconn plant will be located, and more than half of the plant itself are located outside of the Lake Michigan water basin. Because the village and the parcel of land straddle the basin, they do not require as extensive approval as the diversion of water for the City of Waukesha did in 2016.

The City of Racine applied for permission to divert the water to Mount Pleasant, which may serve to circumvent portions of the compact that would otherwise be required.

Racine currently serves portions of Mount Pleasant with its water utility and is not drawing as much Lake Michigan water as its permit allows. A draw of seven million additional gallons would still fall below the amount Racine is already approved for.

If Mount Pleasant were applying for the water diversion itself, it would have meant a new and unauthorized withdrawal of Lake Michigan water.

Ezra Meyer, water resources specialist with Clean Wisconsin, said the application could come up against a provision in the Great Lakes Compact requiring diverted water to be used for a public water supply.

“The public water supply is defined in Wisconsin statutes as a community, largely residential population, with some commercial and industrial,” said Meyer. “The area we’re seeing in this case, there is not a shred of residential land use… it’s rural farmland.”

But because Racine is applying for the diversion, a city whose water supply is considered public, this requirement may be met.

While Clean Wisconsin has not made a formal statement on the water diversion, Meyer said the group will probably advocate for ways to return a greater percentage of the water used to the Lake Michigan watershed.

The compact requires that any water diverted from the Great Lakes must be returned unless it is consumed. Of the seven million gallons diverted from Lake Michigan, 61 percent would be returned through Racine’s sewer system. The rest of the water, 2.7 million gallons per day of water consumption, will be lost primarily due to evaporation through cooling systems used in the manufacturing process.

Meyer said there may be ways to implement technology that could recapture some of that evaporated water to be returned to Lake Michigan.

Because the proposal is for a community that straddles the Lake Michigan basin, the (DNR) is the only agency that has to sign off on the application.

The DNR is holding a public hearing on the application March 7 at 6 pm in Sturtevant. Comments are also welcome by email at [email protected] and in hard copy until March 21.