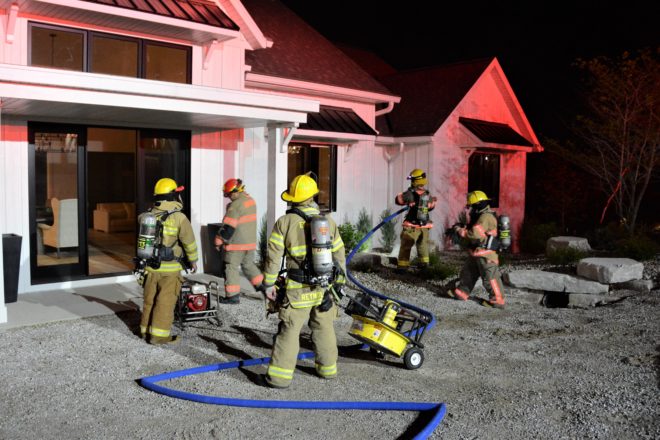 A fire caused by some kind of gas infiltration kept Fire Chief Andy Bertges on monitoring alert all evening on Tuesday at 8433 White Cliff Road. Photo by Tad Dukehart.

Dispatch sent the firefighters to 8433 White Cliff Road at 9:48 pm June 1 after the homeowner reported a fire in one room of the house. By the time firefighters arrived, the flames were out, but the gas remained.

“We set up fans to push the gas out,” Bertges said. “Once we set up fans, it dropped gas levels down to an acceptable range. We just had to run them all night. Once we stopped, the gas ratcheted up to the explosive range.”

The fire department’s gas-monitoring meters don’t distinguish between types of gas, but it could be only propane or methane, Bertges said, and they were leaning toward propane.

“We suspect there was a gas leak in one of the downstairs mechanical rooms,” he said. “It appears to be coming from the ground rather than an appliance.”

The cause of the fire and gas leak are still under investigation, but nothing suspicious is suspected.

Bertges was still on the scene at 1 pm Wednesday, but the levels had begun to drop to an acceptable range. The gas company was involved and the homeowner evacuated. They determined the gas did not threaten any surrounding properties.

“Our purpose is to make sure everybody is safe, and once that happens, turn it back over to the homeowner and gas company,” Bertges said. “We’ll clear the scene and follow up later and check to make sure everything is in the acceptable ranges.”