Sharon Kellner has plans for an uncommon retirement project.

When the Gibraltar Town Clerk retires in March after 23 years, she’ll visit her old office regularly, but not just to say hello to old colleagues. Instead, she’ll head down to the basement. There, she’ll be digitalizing old town documents on her own time, a project she started several years ago when it was difficult to locate old files. 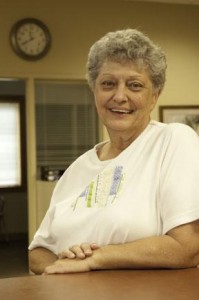 “I’ve got my work cut out for me, but it will be worth it,” Kellner said.

Kellner began her service as the town’s treasurer, then became clerk before moving south to Brussels in 1995. She didn’t stay away long, however, coming back in 1998 and stepping back into her old shoes, this time as clerk, treasurer, and administrator.

“I started on a part-time basis in 1985,” she said, when running the town was a simpler endeavor. It was the end of the pre-Internet, pre-Smart Growth era, before citizens began to demand much more of local government.

“It wasn’t until about 10 years ago that the accountants said we should operate more like a business and instituted the Government Accounting Standards Board rules,” she said.

That’s when small-town government ballooned. Each town had to record its entire inventory of sidewalks, streets, buildings and equipment, then figure out the depreciation on everything. “I thought I was going to go crazy!” Kellner said.

Perhaps nobody in government has had a better vantage point to view to the change in government over the last 25 years than our town clerks. Thanks to their long tenures (they aren’t elected), they bring perspective, and where town board members fulfill their duties as a second or third job, town clerks work in the halls of local government every day.

They handle the mundane duties, the complaints, the endless questions of citizens, and execute the decisions of the board. Computers have changed the job, but haven’t trimmed the workload as was once expected.

“You would think that computers would have saved work, but it actually ads to it,” Kellner said. “People have so much more access to information now, and they want more.”

Clerks now have to maintain and update websites and email notices in addition to all their other long-established duties. While it has increased expectations, it has also lead to a boost in participation by citizens, Kellner said.

“Over the years I’ve seen more people show interest in the town and how it works,” she said. “And by getting involved, we’re getting to know each other and care more. I think a lot of that came from having so many people working together on sub-committees for the Smart Growth plan. It shows that government can connect you with your neighbors in ways you don’t realize.“

She’s looking forward to her final months working with the current board, which she’s excited about.

“This board has a good mix of young and old, different backgrounds,” she said. “The only thing it doesn’t have is a woman. But they’re enthusiastic and try to support people and new ideas. They care about their community and do their legwork.”

When her tenure ends March 4, Deputy Treasurer and Clerk Beth Hagen will step into her shoes, and Kellner will head to the basement, continuing her project, with fond memories of her years upstairs.

“All in all it has been a fun job. It’s never been the same thing for two days, and I’ve had wonderful people to work with.”