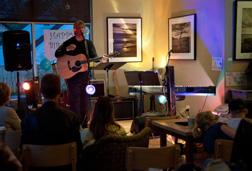 Midweek Open Mic at Glas in Sturgeon Bay will be moving to Tuesday nights for the summer, beginning June 7. The popular midweek showcase of original music will be from 7 – 10 pm every Tuesday for the remainder of the summer season.

Midweek Open Mic began in October and its success has kept it on the schedule for the foreseeable future. The nights are led by hosts Josh Gregory on the piano and Elliot Goettelman on the guitar.

“Midweek Open Mic has brought a lot of talent into Glas,” said Angie Jonas, manager of Glas. “It’s great to see performers, young and old, getting on that stage and putting on a great show each and every week.”

Open Mic welcomes all styles of performance and all abilities.

“This is a great environment for seasoned acts to work on new material or for an emerging artist to practice their stage presence,” said Goettelman.