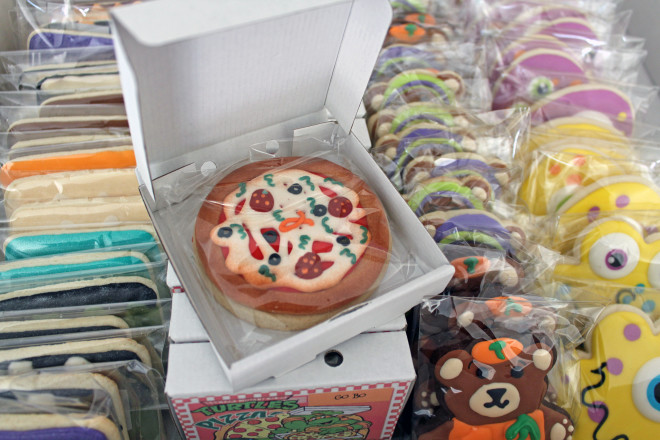 Jill Wettstein said no two cookies are alike, especially this one that comes in a mini pizza-box. Photo by Jackson Parr.

Standing in the garage of Funky Cookie Studio, owner Jill Wettstein opens a package that arrived at the post office that morning. Inside is a collection of cookies decorated to look like Batman, Superman and other playful designs. The box is one of about 330 that line the garage, meticulously organized into three categories: fall, Halloween and kids.

“I started it just as a hobby,” said Wettstein. “People would ask if I would donate to auction or charities and I thought this was really cool, a dozen cookies and they’re making $500, $600 on auction.”

Now, the Go Bo! Foundation Bake Sale that takes place on Pumpkin Patch and Fall Fest weekends brings in more than $25,000 with cookies from 46 states and 13 countries. During its four years in existence, it quickly became the largest fundraiser for the Go Bo! Foundation, which seeks to bring hope to children with life-threatening medical conditions by funding research, supporting treatment, and helping their families during times of financial need. 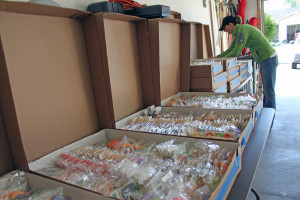 Sarah DeNamur organizes nearly 7,000 cookies that came into Sister Bay in the past two weeks. Photo by Jackson Parr.

“It really is to help children with life-threatening diseases, that’s where the money goes to, but the whole idea behind it is pay it forward,” said Wettstein, who believes the true value lies in the foundation’s message and awareness for pediatric cancer.

“For the foundation the money is great, but to me it’s a saturated market. There are only so many people and so many cookies. The dollars are great but the message is bigger – of just being kind and doing good things and of pediatric cancer and how much work is needed in that field.”

Through a society of cookie artists, the foundation’s message has reached throughout the world and attracted more attention than, in Wettstein’s opinion, could be accomplished by a simple call for donations.

“We can bake,” said Wettstein about herself and fellow bake sale organizer Sarah DeNamur of the FlourGirl Patissier, admitting their lack of know-how in fundraising management and operations. “If I would have just put out a plea for money for Go Bo! I would have maybe made some. But asking them to make cookies that we can sell…they make them, they donate them, they ship them, all free of charge. When it’s coming from your heart and your hands it’s so much different than when it’s coming from your wallet.”

In this way, the bake sale reflects the philanthropic idea of effective altruism, or doing good in the most effective way possible. Rather than a call for monetary donations, bake sale organizers play to their strengths, and Wettstein believes that is the reason for their continued success.

This success relied heavily on the power of social media in spreading the word. Wettstein is a powerful presence in the world of cookie decorators on Facebook, with more than 86,000 likes on her Facebook page.

This weekend, Wettstein has seven cookie friends from around the world flying into Sister Bay to help with packaging and preparation for the bake sales. This year, the event will include a bone marrow registry during Fall Fest.

“That really is the direction, medically, that the foundation is heading toward,” said Wettstein.

Organizers will also be auctioning off cookies during the bake sales using Periscope live streaming. An auction before the bake sale already brought in $260 for a single cookie.

Just as the local community stands behind the Go Bo! Foundation, including donations that cover every single expense that would otherwise create an overhead, the worldwide community has latched onto the cause by serving its message in a hands-on, creative way.

“People are so willing to help,” said Wettstein. “This is an avenue for them to be able to do it. It’s not our bake sale. It’s everybody’s bake sale so they’re really invested in it.”