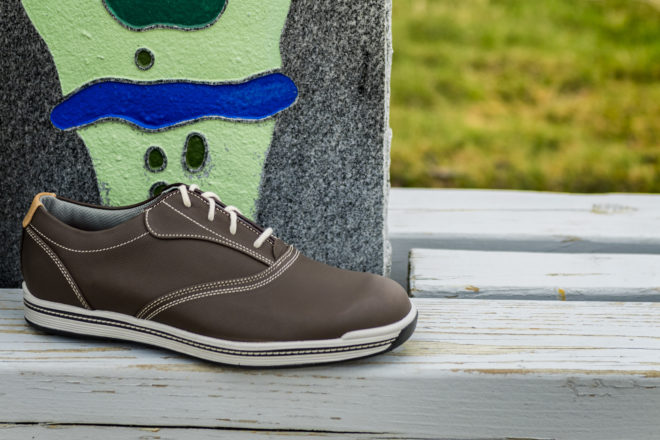 Golf footwear has changed over many decades. Spikeless shoes, like these from FootJoy, are now popular among golfers. Photo by Len Villano.

“Although golf was originally restricted to wealthy, overweight Protestants, today it’s open to anybody who owns hideous clothing.”

What was it that gave golfers the reputation as bad dressers?

Does it go back to the early days of tweed coats and knickerbockers? Surely it can’t be the innocuous Arnold Palmer-era of khakis and polo shirts. Perhaps it’s the Jack Nicklaus-era of pastel colors and preppy sweater vests.

Throw in a couple of individuals such as Payne Stewart and his brightly colored throwback ensembles and John Daly’s psychedelic trousers, maybe it all adds up to explain how golfers have become a cliché for fashion faux pas. 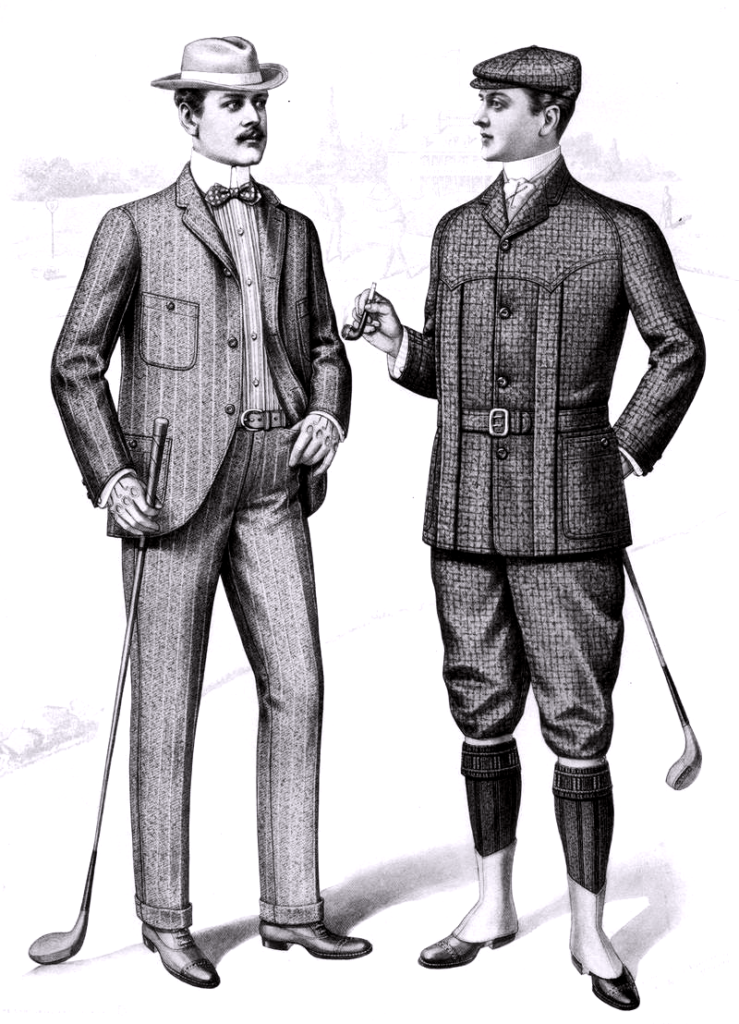 Golf courses have long been known for dress codes, and many of those often seem reminiscent of a less scruffy time, say, the Eisenhower era:  All players shall be neat, well groomed and in appropriate attire. Blue jeans, halter tops, shirts without collars, short shorts and flip flops are examples of inappropriate attire.

Kim Nimmer, event coordinator at The Orchards in Egg Harbor, said people do want to fit in on the golf course.

“Most golf courses have a dress policy. No cutoffs. No jeans,” she said. “In spring and fall we’re pretty lax on that, but most people are out there wearing khaki pants and one of the golf shirts that are in style.”

Nimmer has seen a big change in golf fashions in the 13 years she has worked at The Orchards.

“It used to be blue, black, white, gray, very muted, basic colors. Now it’s very bright. How bright can we get? I think it’s about making a fashion statement,” she said. “You see a lot of stripes, a lot of bright colors. I think that’s the huge thing — the colors. Bright everything, from your shoes to your hat. That type of thing is very new in the last couple of years, making a statement while you’re out there.”

Technology also plays a role in modern golf wear, Nimmer said, with breathable, stretchy, water-resistant and UV ray-blocking material made for comfort on the links.

She points out that today’s golf wear can make the transition from the golf course to just about anything else you do.

“People come in and buy the shirts because they can wear them to work. They’re dressy enough,” she said. “The women’s line is huge and very fashionable so that you can wear them anywhere. Jamie Sadock has a huge line of clothing and it’s all about fashion. She does bright colors, sheen material. It goes from the golf course to out for dinner at night because it is so versatile. People come here because they know we do carry her line.”

“The biggest thing that I have seen is with the technology in the fabric,” said Mark Klinger, PGA Head Golf Professional at Horseshoe Bay Golf Club in Egg Harbor. “They’re figuring out how to make it a lot more comfortable and easier to care for. It’s also with the performance. Things have become a lot more athletic and sportier, and almost easier to swing while wearing, rather than the traditional cotton golf shirt we were accustomed to 15 years ago.”

Horseshoe Bay does have a dress code that requires a collared shirt for men and woman, and no denim.

“Being a private club, it’s the responsibility of our members to adhere to our policies and to see their guests are dressed appropriately and adhering to the standards and policies we have in place,” Klinger said.

And if a member or guest does not meet the dress code, “We carry everything you can imagine, the most high-end golf brands out on the market. Anything you’d like we can get,” Klinger said.

“Golf fashion is changing,” said Phil Riddle, one of the owners of IdleWild Golf Course. “As far as fashion, whatever you see those guys wearing on Saturday and Sunday on TV, that’s pretty much what you see everybody wearing, and that’s what’s for sale at the golf courses, too. We do not enforce a collar rule here. There are courses that do, a lot of them. But we’re not one of them. We’re friendly to the farmer or the businessman.”

Riddle is especially appreciative of changes in golf footwear.

“People have finally figured out you don’t have to wear those same old golf shoes that people have been wearing for 50 years,” he said. “They now make a comfortable shoe that’s spikeless. It’s got dimples on the bottom. I wear a pair all day long every day, and if I want to go golfing, I’m already in them. That seems to be a trend. FootJoy has come out with some wonderful shoes that feel good, they’re water repellent. It’s almost like being in a very comfortable tennis shoe.”

And for those who feel the need to expose their feet to the world, instead of flip flops, Riddle said FootJoy also has a sandal line. 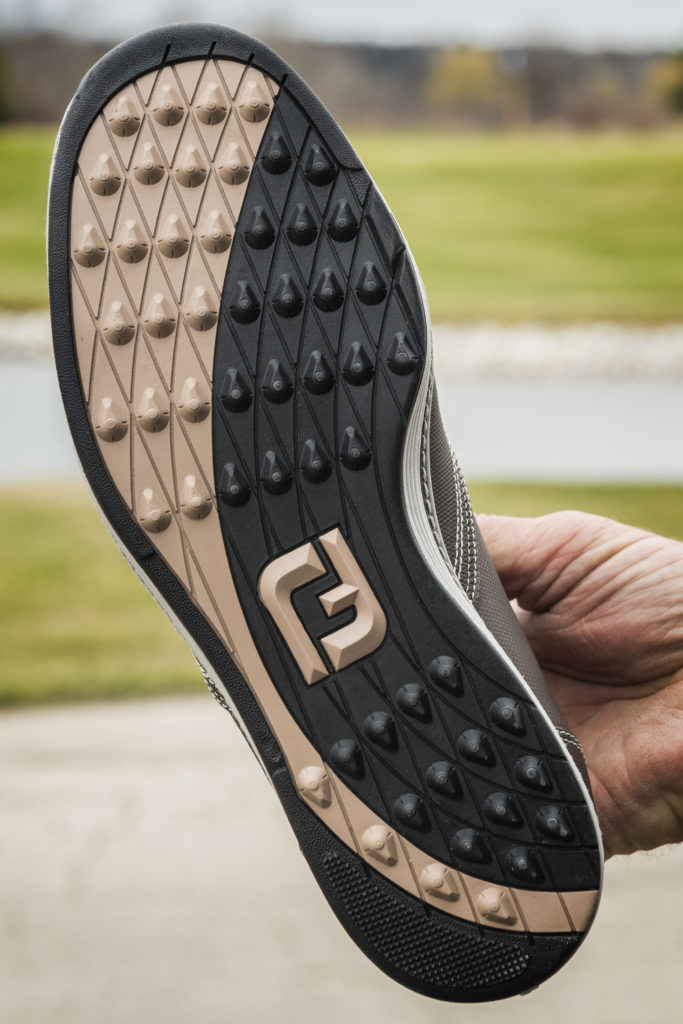 Jim Bresnahan, owner of Maxwelton Braes Golf Course in Baileys Harbor, said he sees no point in having a dress code.

“I’m not in a position here at Maxwelton where we are turning a lot of people away,” he said.

Bresnahan points to Course No. 4 at the Cog Hill Golf & Country Club in Lemont, Illinois, commonly referred to as Dubsdread, a public course where top PGA stars have played in the Western Open. He was at the course once when he saw a player go on the course in a t-shirt, so he asked someone at the course about their policy, since most places enforced the collared shirt policy.

“They told me Tiger Woods basically changed all of that when he started going out with a non-collared shirt. So they basically said they dropped their dress code,” Bresnahan said. “That course is about $155 to play 18 holes. They said, ‘If you want to pay that price, then you can come looking any way you want.’

“Obviously it doesn’t cost that much to play here. We’re probably one of the more economically friendly courses,” Bresnahan said of Maxwelton Braes. “We feel a dress code restricts the freedom of play. Now, we haven’t had anyone coming out here looking like a hobo yet. I think in some cases golf had become a game of snobby, rich people. Arnold Palmer obviously was the first one to start changing that perception, and of course Tiger Woods was the second one. The perception has changed over the years and I think we’re just rolling with the times. Our perception is, you need to go out here and have a great time. If you don’t have a collared shirt, that’s fine. I’ve never seen anybody come out looking like I don’t want you on my course. We’re very happy with the fact that we don’t have a policy.”

In his third season as general manager at Cherry Hills Golf & Lodge in Sturgeon Bay, Jon Martell has tried to maintain the tradition of appropriate golf wear that was instilled in him at his last position, a high-end golf course on the East Coast.

“Half-a-million-dollars-to-join-type of place, so the dress code is very strict and very enforced, so my habit has always been to dress very properly,” he said. “My staff and I always wear appropriate golf attire.”

And what is appropriate golf attire?

“Sleeves on shirts, collared shirts. That’s about the extent of it here that I could potentially enforce. Jeans are pretty much allowed anywhere except on country clubs,” Martell said.

“If you want to dig deeper, look at how many private courses are not private anymore,” he said. “In order to get people to play golf, you can’t be a stuffy country club.”

Tom Schmelzer is entering his 17th year as owner of 27 Pines Golf Course in Sturgeon Bay, where there is no dress code.

“At a public course like ours, it’s fairly easy to keep an eye on what’s going on,” he said. “People are more conscious of the new clothing wear, this new wick clothing and stuff. It’s nice looking and popular. There are so many colors now.”

But Schmelzer and staff do keep their eyes peeled for two items.

“We don’t allow metal spikes or heeled shoes on the course. Metal spikes have been gone for awhile but every once in a while someone shows up in an old pair of them,” he said. “Offensive t-shirts, we watch for that, too. We just ask to cover them up or turn them inside out. There’s some pretty wild ones that pop out. The F-word is a bad one right away. Some of the guys forget they’ve got something like that on when they go golfing with their buddies. It’s offensive to people. They usually understand when you bring it to their attention.”