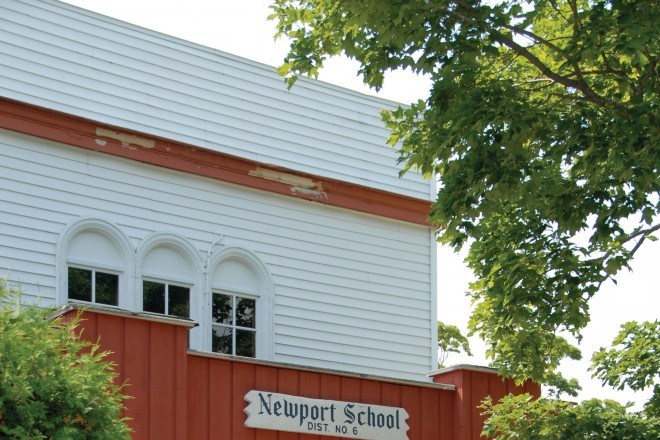 It’s not unusual for the soul searcher to pull up roots and start a new life in a new place. A man compelled to search for peace and quiet might pack his things, travel as far north as possible, turn right at the farmer’s field onto a quiet, seldom traveled road, and hole up in an old schoolhouse where local farmers store their potatoes. On the way to nowhere. A rural refuge. And after this soul searcher convinces his wife that this would be the perfect place to live and love, (“Looks more like the perfect place for a murder,” this soul searcher’s wife was overheard saying), he might start a small, quiet business – a little something to pay the bills. Soon after, almost against his will, he just might become a local celebrity. Maybe it’s destiny. Or, put more simply:  wherever you find yourself, there you are.

This was true for “Uncle Tom,” who, in the 1970s, founded Uncle Tom’s, now known as Uncle Tom’s Newport School Candies. Mention Uncle Tom’s to most folks and you’ll get one of two responses:  “Uncle Tom’s… I know I’ve driven by it several times but I can’t quite place it…” Or, more likely than not, “I knew Uncle Tom! He used to recite poetry to my kids! He gave us free popcorn!”

Like the man himself, Uncle Tom’s Newport School Candies (in the historic Newport School on the corner of Europe Bay Road and Timberline Road, very near Newport State Park) is a mixture of many things:  a cornucopia of candy, fudge, Uncle Tom’s world-famous (really, it is world famous and, yes, they do ship) pancake mix and more than enough free popcorn to make a meal. While the kids are busy picking out candy, adults will be more than entertained by the myriad of framed photos of politicians and sports figures, pictures of Uncle Tom at political rallies, yellow-aged articles from one journalist or another trying to capture the essence of Uncle Tom, and framed fan letters from children and adults alike. All of this is made even the more memorable by the fact that it exists in a century-old schoolhouse, in the basement to be exact, where the cool, dark air that once protected the local potato crop naturally protects the candy and fudge. When you enter the building, you are met with an eclectic mixture of old and new. And as you descend down the wide basement steps, you literally feel like you are climbing back into history. If you are searching for authenticity, search no more. This is the real deal.

The late Uncle Tom, a.k.a. Thomas Collis Jr., was a first generation American whose parents were Greek immigrants. Born in 1904 in Newark, New Jersey, Uncle Tom was brought up with the work ethic and hard-knock attitude of parents who knew struggle and survival. Tom’s father, after moving the family to Chicago, started the Busy Bee Confectionery, a candy shop in Forest Park, Illinois. This business venture was made possible by one of Tom’s father’s friends, who donated the start-up capital of 100 pounds of sugar, 100 pounds of peanuts, and 50 pounds of chocolate. (Pay attention here:  note the thread of generosity that weaves itself through Uncle Tom’s life).

Uncle Tom worked in his father’s candy store all of his childhood, and it’s here that he mastered the family recipes, still in use today. From his father:  candy, fudge, peanut brittle. From his mother:  pancake and porridge mixes. In his early adulthood, Uncle Tom broke from the family business and delivered milk, via horse-drawn carriage. He proudly grew his modest route into a successful and thriving business. During the Depression, when his customers often couldn’t pay for milk, Tom would extend credit. Years later, when Tom and his first wife, Meta, were building a house, the majority of the work was done by men and women wanting to repay with labor the great kindness that Tom had extended them.

His career as a milkman brought him celebrity, and he found himself running as an independent in the local mayoral race. His campaign was successful (“with every bottle delivered, I was campaigning”). He was mayor of Forest Park, Illinois from 1939-1943, which Tom remembered with a bitter sweetness that, if honestly assessed, is likely true for most politicians. He liked serving the public, had a natural ability to connect with people, and he was proud to court industry to Forest Park, creating over 5,000 jobs. But the pressures of political life were tough, and his day milkman job didn’t stop for politics. Soon Tom felt the strain on his friendships and his marriage, and he was divorced shortly thereafter. (Those of us who consider ourselves more Door County-ite than not will gloat in knowing that Uncle Tom, after living in Door County for a just a few years, said that he would never go back to Illinois, “not even to buy a pair of socks.” It’s true, you can read all about it by going to a Door County library and checking out Tom Collis Jr.’s book, Gratitude is Attitude, Attitude at Work in the Monday Morning Marketplace.)

From the time Uncle Tom opened his Door County shop, with his slogan, Gratitude is Attitude, posted on the wall, he couldn’t keep folks away. Much of the lure, of course, was the high-quality, handmade candies and assorted sweets, muffins and pancake mixes, jellies and jams. But the other lure, the pull that brought families back year after year and generation after generation, was Uncle Tom himself. A philosopher, poet, author, avid politician and champion of the common man, Uncle Tom was a larger-than-life character with more to offer than something good for your belly. A Green Bay reporter wrote that, “Tom Collins (sic), the Door County philosopher…dispenses equally…ideas, ideals, and candy from his ship in Ellison Bay.” The Chicago Tribune wrote, “The self-styled Socrates of Door County…helps patrons find the poetry in life.” And those who knew Uncle Tom personally speak of his generous spirit and community mindedness, especially the numerous pancake breakfast charity events for which he would donate both time and pancake mix.

“Jim and I took our kids there for years,” says Linda Adams, local writer and real estate agent, “when Ellison Bay was basically about smoked fish and candy. He always remembered us, and would recite blessings over our heads. Still to this day, our grown kids head up north, to take a trip to Uncle Tom’s. He had such a big heart and was so generous, giving away half the store… I wondered how he could make any money.”

It’s obvious that Uncle Tom knew the secret:  people buy from people. And for a business that has been so steeped in personality, the death of Uncle Tom (he died in 1990 at the age of 86) might mean certain death for the business itself. But here’s where the quality of the product and an owner with a commitment to the history of the business comes into play. Uncle Tom’s has survived. In fact, it’s thrived.

First the business passed to Aunt Marge (no relation and she was not married to Uncle Tom). Marge had worked for Uncle Tom for 20 years, became a business partner, and upon his death, became the sole proprietor of the store for seven years. Upon her retirement in 1997, she sold the business to the current owners, Heather and Jim Laughlin. Jim is a commercial fisherman who works with Heather’s father and uncle in their family business. Heather (née Weborg) is a local Ellison Bay girl, who bought the business at age 23.

Spend five minutes with Heather and you can see why she’s such a good fit. Like Uncle Tom, she’s personable, energetic, and committed to the business in a true hands-on, work-a-day approach. Unlike Uncle Tom, who never lived in the schoolhouse but instead had a home nearby, Heather, Jim and their three children live in the schoolhouse, in a residence that they constructed.

“My kids have a great time living in a candy store,” she laughs. “We had to actually start charging them for the candy, making them spend their own money to buy the candy, so they wouldn’t eat the profits. They do get the Laughlin family discount,” she says with a wink.

“I love this business, and I love the people who come back year after year to talk and to buy our products,” she says. “Originally I think folks were worried because I was so young, but now customers realize that I have as much love for the tradition and history of what Uncle Tom and Aunt Marge created as they do. I grew up riding my bike here, to talk to Uncle Tom and to buy his candy. I can’t be Uncle Tom, of course, but I can continue to honor his legacy and stay true to his recipes.”

Heather has balanced respecting the old ways (same recipes, same old-fashioned, handmade approach) and embracing the new. Unheard of in Uncle Tom’s time, now a great deal of business comes in through their website (visit www.uncletomscandies.com to order pancake mix, Swiss chocolate fudge and more), and she keeps the business open seven days a week during the season. The customers keep coming, many have come every year for decades, and others are just discovering Uncle Tom’s for the first time. Heather continues to operate the store with the same professional, welcoming friendliness that brought in the first customer 30 years ago, including the trademark free bag of popcorn for every customer.

“In the winter, I just put a sign on the door that tells folks to ring the bell. I am usually in the basement, making fudge for mail orders, so I am happy to open up. It’s always good to see people, especially in the wintertime, when there’s time to talk.”

“I don’t know,” she says, looking around the store. “ I just feel so lucky.” The Laughlins are celebrating their 11th year in business. I think Uncle Tom would approve.