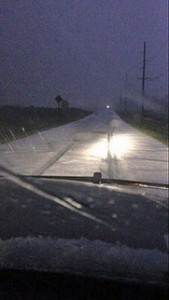 A storm the night of July 14 brought heavy rain and hail. A Door County sheriff’s deputy took this photo from his squad car on West Dunn Road, with the roadway covered in 3 to 4 inches of hail.

Matt Stasiak believes farmers – or in his case, farm researchers – have to have hope when events conspire against them, as they did the night of July 14 when a freak hailstorm destroyed all the crops at the Peninsular Agricultural Research Station just north of Sturgeon Bay.

“It’s everything, grapes, apples, cherries. They won’t be harvestable,” said Stasiak, who is both a researcher and superintendent at the research station. “The grapes, there was a fair amount of foliage damage. It will be interesting to see how they respond.”

He said the station was conducting two insect-control trials on apples this year.

“We may be able to get some data out of our apple projects. We’ll be able to harvest the fruit and get field data. But we won’t be able to generate any review from that fruit. So we have to make a decision – do we continue treatments or do we terminate it right now? That’s probably going to be the case for a lot of projects we have that are a year old. We’ve got to look at the damage that’s there. In some of the blocks we have more extensive damage where the fruit was cracked or large chunks of flesh were removed from the fruit. That fruit’s going to drop from the trees. All those cracks may have an influence on the insects or disease moving in.

“In other blocks where there’s just bruising or dings on the fruit, we may be able to do some of the evaluations for some of the insects. It’s all going to be on a case-by-case basis.”

The station’s cherries were about two weeks from harvest when the storm hit, which leaves the researchers with questions about how to proceed with a crop that is susceptible to rot when damaged by weather.

“Are we going to have more fruit rot moving in? Do we spray them some more or do we let the fruit rot take over and worry about carryover for next year?” Stasiak said. “It’s a management issue that you have to make decisions on the next couple of weeks or months or for the rest of the season.”

He said the storm’s damage will not only affect the station’s crop research, but it also means there will be no harvestable crops for sale, which usually amounts to between $15,000 and $25,000 a year through crop sales.

“We have to try to generate some revenue here,” Stasiak said. “It goes back to Madison and in our budget. We lose that this year. But it’s even worse for the commercial growers. There were almost 200 acres of cherries that were destroyed in the storm just east of here. I don’t know if those guys had hail insurance or income continuation insurance, but even with that, you don’t get a full return like if you were to harvest your crop and get paid for it.”

Stasiak said the loss of revenue will require more grant writing by the station to make up for the loss.

“That revenue goes a long way in doing projects, buying whatever we need to keep the station going,” he said.

But, he adds, “With farming and farming research, you’ve got to be hopeful. I’ve been here 25 years and we’ve had two times where we’ve lost crops to hail. You hope it’s a one-in-10 year or one-in-20 year event.”